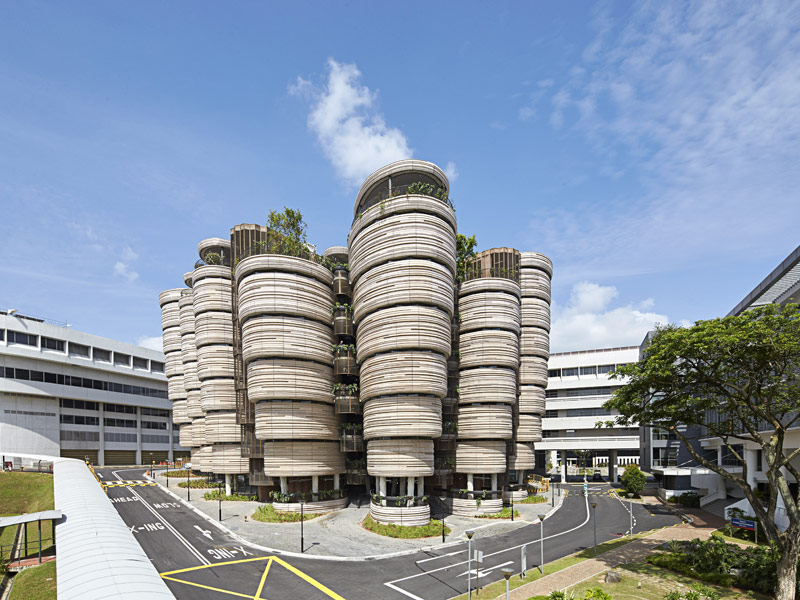 The Thomas Heatherwick Studio has just completed a building for the Nanyang Technological University in Singapore, with the specific intention of it not being anything like any other university building in existence so far. With the Learning Hub’s stacks of circular spaces, its nickname of Dim Sum Towers, given by the students, seems particularly apt

Picture the scene: students wandering around campus beneath umbrellas trying to be cool. You may have imagined Leeds, Manchester or Cardiff or some other slightly sodden city. But this campus is immaculately manicured, full of exotic plants and trees and the umbrellas are there to help the students to literally be cool, deflecting the beating sun of Singapore that gives the city state an average daytime temperature of 28 degrees. The campus is Nanyang Technological University, Singapore, masterplanned by metabolist Kenzo Tange, with a green lung park at the heart of it (which now has a building in it by Singapore architect CPG Consultants). Into this essentially rectilinear world has now dropped an alluringly curvaceous building that has already been dubbed 'dim sum towers' by students. The tag is good, as it does look like a series of bamboo steaming baskets stacked one on top of the other. The planting will eventually form a green curtain in the atrium. Photo: Hufton and Crow

This is the new Learning Hub and it's the first multistorey building by the UK's Heatherwick Studio. This scheme was headed up by Thomas Heatherwick and project architect Ole Smith and the studio worked with lead architect and sustainability consultant CPG - the former Public Works Department of Singapore - to deliver the project). While its nickname is apt, there's also something very British about it, this virtually all concrete building, with its striated exterior, not pockmarked by fenestration, with multiple entrances into an interior where all of the services are completely exposed - from the outside, you can't help thinking that it's a rather voluptuous take on the British brutalist car park. A mesh is used on the emergency stairs, helping to give a rhythm to the façade. Photo: Hufton and Crow

The Learning Hub is a new kind of university building. While it does contain a library and theatre space, the majority is made up of 56 rounded rooms in 12 separate stacks, over eight storeys, connected to a large concrete floorplate, giving the building 14,000 sq m of floor space. The rooms themselves, which will be used by every faculty at the college -- and all 33,000 students - are spartan and are not meant for teaching. They are spaces for discussion and exploration. Information will be reviewed by students online before they set foot in the Learning Hub - they won't be 'taught' here. This permeable building has no front or back, and has 12 entrances over five levels. Photo: Hufton And Crow