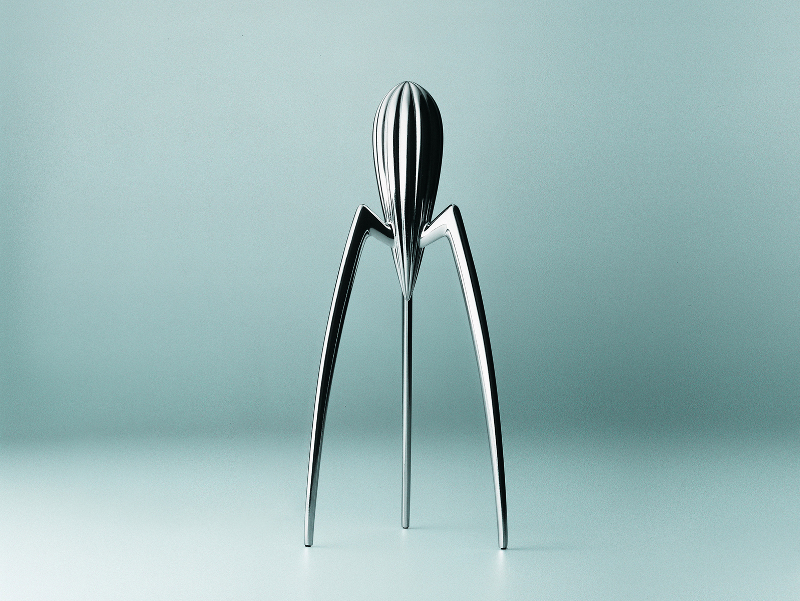 We ask the Ria Hawthorn, a curator of design at the Design Museum in London to choose her favourite products from iconic homeware brand Alessi

Ria Hawthorn, a design curator at the Design Museum in London, chooses her favourite Alessi products, both new and classic. After 93 years of producing objects for the home, Piana is Alessi's first foray into seating, first produced in partnership with Lamm, but now manufactured by Alessi, Chipperfield's reductive, elegant folding chair has the versatility to be used inside or outdoors and in a domestic or commercial setting. The supporting structure is neatly hidden within the moulded seat and the chair folds to become horizontally stackable. Part of a range of teapots, coffee-makers and kettles designed by Aldo Rossi in 1983 and taking the iconic forms he used in his buildings, La Conica is architecture for the table. It evolved from Aldo Rossi's participation in Alessi's influential Tea & Coffee Piazza project for which 11 architects were invited to create a limited edition silver tea and coffee service. For many it was their first experience of product design and the project exemplified 1980s postmodern design. Designed by German designer Richard Sapper in 1983, this stove-top kettle has a perfect hemisphere top in polished steel with a black handle. The spout is capped by a melodic brass whistle tuned to produce the notes of E and B - an antidote to other kettles with demanding, discordant tones. It was Alessi's first designer kettle and inspired many designers to take a poetic approach to homeware. Inspiration struck Philippe Starck when he was eating dinner on the Amalfi coast and had to ask for a lemon to go with his squid. A series of sketches sent on a napkin to Alberto Alessi revealed the now unmistakeable form of the controversial and questionably functional Juicy Salif, a design which transformed the humble lemon squeezer into an object of aspiration and desirability. A family of everyday stainless steel Pots & Pans, designed by Jasper Morrison in 2006, that can go in the oven, dishwasher or on the hob. Typical of Morrison's quiet attention to detail and quality, they have a pleasing weight to cook with and the clever saucepan handles allow a hot lid to be lifted with a wooden spoon to avoid burnt fingers. Castiglioni designed a very readable watch for men and women by reducing the component elements to the essential. The width of the circular rim of the dial is minimised and the watch-face enlarged to increase readability. The easily replaceable strap is attached to the dial by threading it through two discreet loops while the elegant typography was designed by Castiglioni's friend, the renowned Swiss graphic designer Max Huber. Designed by Italian architect and designer Alessandro Mendini who has been design consultant to Alessi since 1979, Anna G. has been a bestseller since it was first produced in 1994. It's the product which sums up the personable design language for which Alessi is best-known.