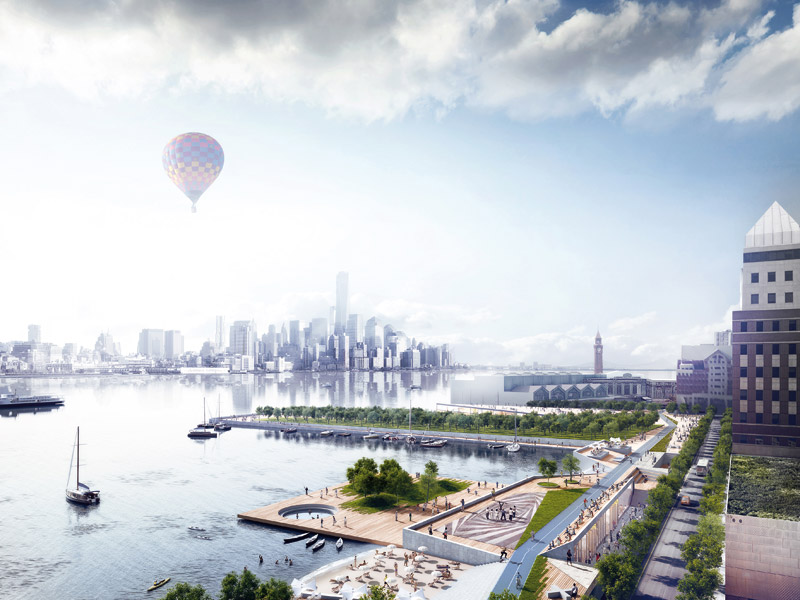 It seems almost every day that Mother Nature thrashes our world with a horrific new disaster, whether it's howling hurricanes, earthquakes, blizzards, floods or freezes. But, with destruction and devastation comes an opportunity for architects and communities to start again, learn from the past and rethink how we can live more harmoniously with nature, instead of fighting against it.

The Royal Institute of British Architects' latest thought-provoking exhibition, Creation from Catastrophe, looks at a selection of eclectic projects from the 17th century to the present day that have radically reimagined and rebuilt whole cities and vulnerable communities. Sir Christopher Wren's Plan for Rebuilding the City of London after the Great Fire of 1666. Photo: RIBA Collections

Starting with the rebuilding of London after the Great Fire of 1666, this admirably ambitious show weaves a swift path from 18th-century Lisbon, through visions for 19th-century Chicago and the metabolists in Japan, to contemporary responses from the likes of OMA, Shigeru Ban and ELEMENTAL. Although naturally limited by the small space of the one-room gallery - the display only really skims the surface of responses to catastrophic events - the exhibition has a lot to say. Divided into two parts, the 10 projects on show illustrate a shift from a top-down approach of grand, ideological masterplans spearheaded by one powerful individual, to a more cathartic, collaborative way of building that puts people first and works with nature. The constraints of the compact gallery have been expertly dealt with by Aberrant Architecture, which has created an immersive environment that picks up on the tension between top-down and bottom-up responses.

Three sequential spaces are linked by a ramped passageway, journeying up from a clean, white acrylic-clad space to a warm, enveloping, natural cork-clad room at the back that looks over the material on show. From the five original plans for rebuilding London in the aftermath of the Great Fire (350 years ago this year), the exhibition moves abroad to Lisbon. Following an earthquake that almost entirely destroyed the city in 1755, the powers that be, took the opportunity to wipe the slate clean, replacing the medieval street plan with a grid of regal avenues and squares. A large model of a Pombalino wooden-framed building, still used in training by the Lisbon fire service, shows one of the earliest examples of seismically protected constructions in Europe. Opposite, images from after Chicago's Great Fire of 1871 depict the remarkable transformation of a city from ruins and rubble to innovative stable structures and fireproof metal frames, leading the way for the first skyscrapers and the city it is today.

A big leap forward from past to present, and several of the contemporary projects, many ongoing or in progress, stand out for their socially minded, participatory approach that aims to empower communities and bring people together. Indeed, the whole exhibition could have been based on these few projects alone.

One such example is man-of-the-moment and Pritzker Prize-winner Alejandro Aravena and his practice ELEMENTAL's plans for Constitución, a city on the west coast of Chile exposed to frequent flooding, earthquakes and occasional tsunamis.

Instead of building flood defences between the estuary and the city, the team, in consultation with the community, took the bold decision to relocate more than 100 families and replace them with a dense, green forest on the riverfront to absorb water and create some much-needed public space. It is under construction and due to be completed in 2017. Elsewhere, Pakistan's first female architect Yasmeen Lari works with architecture students to pass on knowledge and skills to local residents so they can build their own homes. Lari has built more than 45,000 relief structures in flooded areas of Pakistan to date, including several women's centres and free schools. Constructed from mud walls and strong bamboo cross-bracing systems, not only are these more resilient to natural disasters and don't rely on outside building supplies, they also provide a long-term legacy of skills for local craftsmen.

Also working directly with the community and building on local knowledge, Lagos-based architecture practice NLÉ has developed ecological building systems for areas of Nigeria prone to flooding and slum clearances that break up communities. Built by local people using wood off-cuts and locally grown bamboo, the Makoko Floating School (2013), for example, provides a community space for slum dwellers: it can float on water with more than 100 people on board. What all these contemporary projects have in common is that they put human need at the centre of the design process. Instead of resisting or fighting a losing battle against disasters, they embrace nature and give communities an open, welcoming space to come together, meet, support one another and rebuild their lives. It represents not just a shift in disaster response, but also a wider trend in the architecture profession towards collaborative design that educates, engages people and enriches communities.

This exhibition should provide inspiration for the next generation of architects, which has the power to instigate change and in some small way make amends for both nature and man-made devastation.