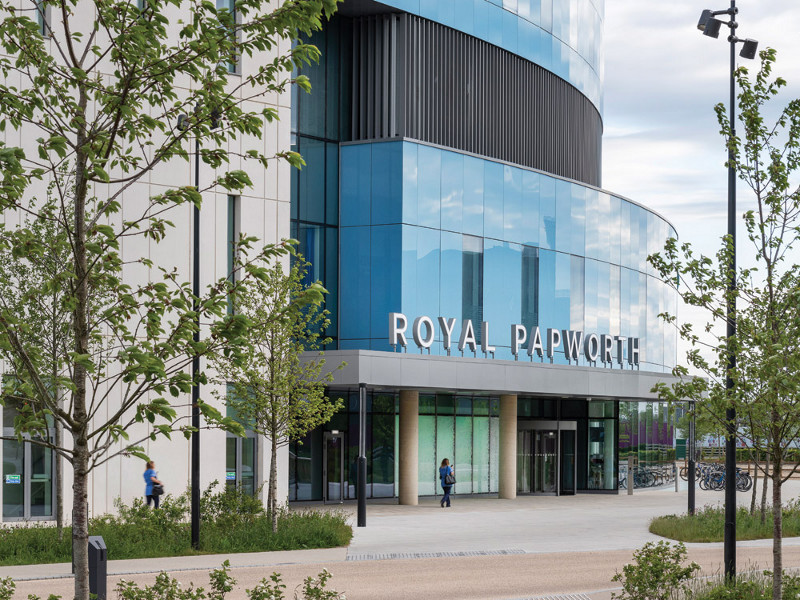 What was your role in relation to the new hospital building?

My role involved being the first point of contact for all design issues relating to the new hospital. I was the interface between the designers (including the architects HOK and the construction company) and the users (staff) and assisted the users in interpreting the proposals from the architects.

Have you had experience as a design client before and if so on what?

The maternity unit extension at Homerton Hospital in London over 13 years ago.

Why did you decide to relocate Royal Papworth Hospital?

The old hospital dated back to 1918 and had expanded over many years. As a result, it had become a mixture of low-rise buildings, prefab offices and temporary buildings, and that growth over time had made the location impractical for a world-class heart and lung hospital. There was an inability to expand any more and the whole location had outgrown its shell.

Because the old Papworth site had developed piecemeal over 100 years, the clinical adjacencies were poor. The new hospital gave the opportunity to create a modern, state-of-the-art building that worked both for patients and staff, along with the adjacency to Addenbrooke’s Hospital. The trust wanted to be on the Cambridge Biomedical Campus to be co-located with other organisations at the forefront of research. What were your ambitions and priorities for the design of the new hospital?

We wanted to make it easier for patients to navigate by bringing everything under one roof. This also makes it easier for staff to move patients from one place to another – no more pushing beds up hills in all weathers as on the old site! The wide corridors within the new hospital also assist with this, and with a curved design it ensures no sharp corners and turns for hospital staff when transporting patients in beds.

We also wanted to speed up patient pathways, such as our emergency heart attack route, which now sees a patient being treated inside one of our catheter labs within two minutes of the ambulance pulling up at the ambulance bay.

Adjacency of clinical services was also a priority, assisted by an underground link corridor to Addenbrooke’s next door.

We also wanted an open-plan office. This enables staff to move away from silo working in their individual areas, creating a more communal feel to the office spaces and allowing for exchanges of ideas.

Did you look at many other hospitals as part of the research for Papworth?

We visited a number of newly built hospitals in the UK (Bristol, Leeds, Liverpool) and in 2008 a four-day visit to the USA incorporated Los Angeles, Portland, Philadelphia and Salt Lake City, which were all in the final stages of completion.

The hospital was procured via the Public Finance Initiative route, and as such the designers/architects were part of a consortium bidding to design and build the hospital.

The ability to engage with users; forwardlooking design; flexibility in approach, and previous healthcare design experience.

Why did you choose HOK?

HOK was part of the successful consortium and their hospital design and health space planning met the hospital’s requirements. They’ve designed a building that aesthetically looks superb and meets all of our key criteria. What were the key design challenges for HOK to overcome?

They had to meet local planning restrictions on external design, fitting all the clinical areas into a building with an upper development limit. They also had to facilitate cultural change in the way the hospital worked, bringing together staff who at the old hospital were based in different clinical areas. For example, we had five separate outpatients departments that we had to bring together into one unit and still function effectively.

How did you ensure that the views of staff, patients and visitors were taken account of?

There were frequent staff user group meetings and engagement with patient groups when decisions were required.

How does the facility improve patient care?

The single bedrooms on the inpatient wards and critical care allow for personalised care, which improves infection control. There is increased personal privacy – each patient bedroom has an en suite and 97 per cent of patients are in single bedrooms. We now have the capacity to combine consultation rooms in the outpatients department with a full array of diagnostic tests, all in one area and easily accessible, and have modern operating theatres and catheter labs.

How does the new hospital benefit staff?

All the facilities are now under one roof with state-of-the-art facilities and better clinical adjacencies. There is now the opportunity to bump into colleagues regularly, both in the main atrium and in the open-plan offices. What were the key design innovations?

It’s a curved building – not easy to build but fantastic to look at and helps move patients around the building as there are no sharp corners.

There are single critical care bedrooms with sliding doors between rooms, which allows for privacy (with a curtain) but also enables staff to quickly move between rooms in the event of an emergency. HOK designed the six theatres and six catheter labs as 12 interventional rooms that can be easily adapted from one to the other. There are now touchdown bases on the inpatient wards that allow staff to be based near to where they are caring for patients. Each room is within sightline of these bases to give increased visibility of patients.

How have you retained Papworth’s heritage in the new hospital?

Royal Papworth’s heritage is something we didn’t want to lose as this is what defines us. While the new building is completely different to the old, the staff have brought the care and spirit of the old hospital to Cambridge. It was vital to us that we maintain the same culture despite being in a new location.

We have also installed a duck pond, which is perhaps the most famous feature of the old site. This area, like the old site, is landscaped, which provides a calming, tranquil setting for patients in their recovery. The artwork in the outpatients department is also based on images from the old hospital site.

There are also plans to put a replica TB hut on the site in the future, in a nod to the hospital’s early days as a tuberculosis colony.

How did you plan for advances in medical treatment when designing the hospital?

The hospital was designed with the future of medicine in mind: theatres have been designed to allow the installation of clinical robots; rooms holding major diagnostic equipment have been built larger than currently required to allow for additional or different equipment. HOK also identified future expansion space of 10,000 sq m as part of the design process.

The most challenging part of the design was getting departmental adjacencies that suited new ways of working while allowing for flexibility of spaces for changes in working practices moving forward.

Has the new building turned out how you expected?

The building is fantastic. We have had so much positive feedback from staff, patients and the public. The critical care area has 100 per cent single bedrooms instead of a shared ward and this has been great for individualised patient care and has been a draw for recruitment. The main reception and outpatients department atriums are spectacular. Clinical adjacencies allow for more efficient and safer working and the move from cellular offices to fully open plan has worked well.