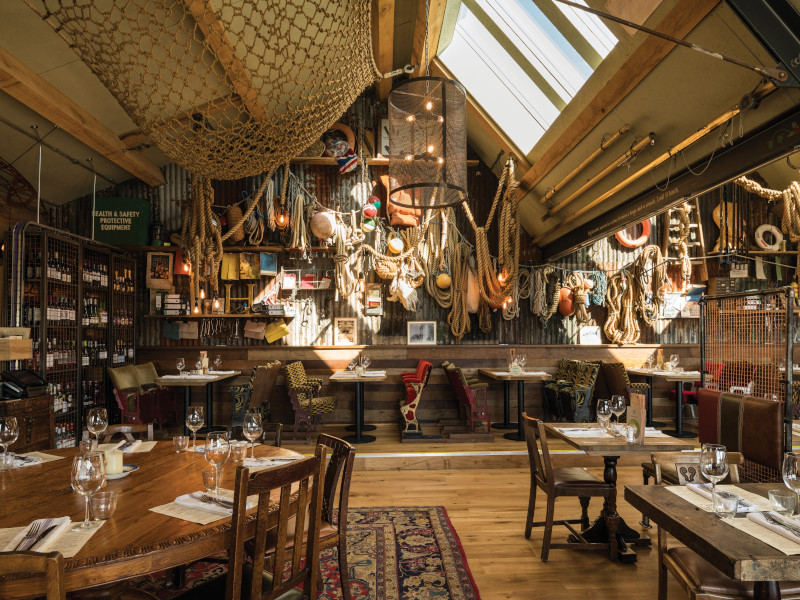 What was your role in relation to the commissioning of new pubs for Hall & Woodhouse?

I was at Hall & Woodhouse (H&W) for 18 years, first as retail director with responsibility for finding and proposing new managed house sites and then as development director from 2013-2019. With my team, my role included creating the vision and the story for the new pubs, working with the selected designer/ architect to develop site layout proposals and designs, and working with the QS to develop costings. Ultimately, the development department was accountable for delivering the new pub from design to operational opening.

How many have you completed?

I was involved in major transformations for between 50-60 of our properties, as well as new builds for eight, including the most recent, H&W Wichelstowe.

Have you had experience as a design client before?

In the 1990s I was operations director for UCI Cinemas where I worked with Fitch Design and RTKL to create multiplex cinemas. UCI was owned by Paramount Pictures, and there was a strong theme of creating buildings of cinematic scale to frame the big screen experience. Is there a future for pubs?

Pubs have always adapted. The great thing about pubs is that they can twist and turn as society evolves. When Hall & Woodhouse started out before the Industrial Revolution, for example, labourers drank pints and pints of low-alcohol (or small) beer as a way of rehydrating after a day of manual work. As agriculture and industry declined so did the need to consume large quantities of beer, so many in recent years introduced food and became pub-restaurants. At Hall & Woodhouse we saw that cafes were challenging pubs so we embraced coffee by introducing a pop-up coffee bar concept in our pubs. And now that premium drinking is on the rise, we’re incorporating that too.

Yes, many boozers have closed down but there were far too many of them around with too poor standards to be able to survive. They are much more resilient if you adapt and get the offer right.

What were your ambitions and priorities for the H&W Wichelstowe pub?

It had to create a major hub and asset for the community that was acceptable to the various Swindon stakeholders in its locality. It also had to be a showstopper that matched, or exceeded, the exciting architecture of the Waitrose on the opposite bank of the canal to the pub. We wanted it to be visible from Swindon old town and the M4, and it had to be distinctive enough to draw in guests to what is, currently, a pub in a field at present by maximising the potential of the canal-side location.

We worked with most of the established pub architects and designers when we undertook a major phase of refurbishment to transform our estate (around 30 pubs) between 2001 and 2006. However, we are a difficult, capricious and demanding client, with ideas that we want the designer/architect to build on with us. We want to inspire and be inspired. We had a real vision of the emotional side of what made a classic British pub. Some designers were able to catch that spark and build on it and inspire us further, and others didn’t. Only a couple really ‘get us’. Over time, we winnowed out the workaday ones and were left with a very limited stable of two or three designers/ architects with whom we share an intense understanding. We’re so paranoid about our ideas being transferred to other brewers via shared architects/designers that I wouldn’t want to tell you the names of the others. A shared philosophy. A pub is more than just a retail outlet. It is emotional heart of its community, part of the social fabric and the architectural history of its locale. We inherited historic pubs and our aim is to build the historic pubs for the next 250 years.

Our approach is very story-led. So we’re looking for the ability to tell a story (imaginary or not) of why the building exists in the location that it does. We found that if we started out with the story of the building we were trying to create, this helped us to establish the logic for the layout of the site and the building.

We don’t like design for the sake of design. Instead, we like design that is rooted in a clear rationale as to what the building has been and how it has evolved over time.

Pubs are fantastic places and we can get quite misty-eyed about them. We need our designers and architects to share this passion. They need to spark off this approach, bring wit and humour to the design and to challenge us.

The process is a creative tension between the designer, the client and the QS, and we always want to go with the vision of the designer if we can.

Why did you choose Mackenzie Wheeler to design H&W Wichelstowe?

Mackenzie Wheeler were already in place when I joined – and I really liked the pubs they had designed for H&W such as the Hankridge Arms (Taunton) and the Ship and Shovell (Westminster, London). These had ‘soul’ and respected the heritage.

They are one of the very few designers who have really been simpatico with us. Working with Rupert Wheeler himself is a great privilege. He is extremely experienced and talented and is a student and philosopher of the architecture and societal role of the pub.

He challenges clients in a calm, charming, yet persistent way. Any creative friction is positive, and his ability to translate vision and ideas onto the site and the building architecture is unmatched in my experience.

With Rupert, over the course of a couple of years we created a framework for a country pub in terms of layout and zones, each driven by a different narrative but all drawing inspiration from the warm, cosy atmosphere of Badger’s House in the Wind in the Willows book.

We’ve worked on about 10 projects with him over the years including contemporary, showstopper ‘uberpubs’ such as the one at Portishead Quay Marina, where he convinced us to build out of shipping containers before they became fashionable to use. Mackenzie Wheeler recently completed the Wichelstowe pub and they are currently working with us on another four, including one on a site by the river at Taplow in Buckinghamshire. What were the main priorities in creating a contemporary pub, and how does this differ to traditional pubs?

It’s got to be showstopping from the outside, and the visual delight has to continue to unfold as the guests encounter the different areas. We live in an Instagram age, so you want it to be somewhere that people will want to take photos of. It’s got to evoke the story that we’ve written for the site. It’s also got to reflect the nature of a traditional pub, with different areas for different purposes such as bar, dining room, saloon bar, kitchen, as well as showing the supposed evolution of the building over time. The quality of materials has to mirror those that allowed historic pubs to keep their charm and appeal for centuries. It should be new, but still be delightfully traditional in feel.

How did you work with the architect to achieve this?

It was a long, iterative process. Only Mackenzie Wheeler of our stable of designers had the capabilities to handle the site layout and building design. Between my department and Mackenzie Wheeler, we decided to go full canal-tastic and try to echo – in a canal theme – the Brunel-esque feeling of the railway architecture in Swindon central.

We explored the harbourside architecture of sheds in Bristol, and as a narrative we told each other Thomas Hardy-esque stories of a small canal boatyard whose owner had started building canal boats in a small shed. He expanded to create larger adjacent sheds, became hugely successful and built himself a warehouse and a large trading hall/showroom.

But then, at the height of his wealth, he was destroyed as the railways he had supplied materials for completely undercut his business. We then worked hard to incorporate this narrative into the design to create a reason for each part of the building – the workshops and warehouses would all be along the water and the feel would be one of a boatyard with boats visible and the canal being very present.

Are you happy with the completed Wichelstowe pub?

The project is extraordinary, and has completely exceeded our expectations. The building is a new landmark, easily surpassing the Waitrose architecture opposite. Guests are awed by it but love the cosy, comfortable, multi-layered experience. In terms of sales, they are almost double our projections. Swindon is an area where many guests already knew our flagship Bath site, but H&W Wichelstowe is an advance even on that. They had high expectations and were not disappointed, and we were thrilled. It was my last project with H&W and I felt I could leave on no better high.