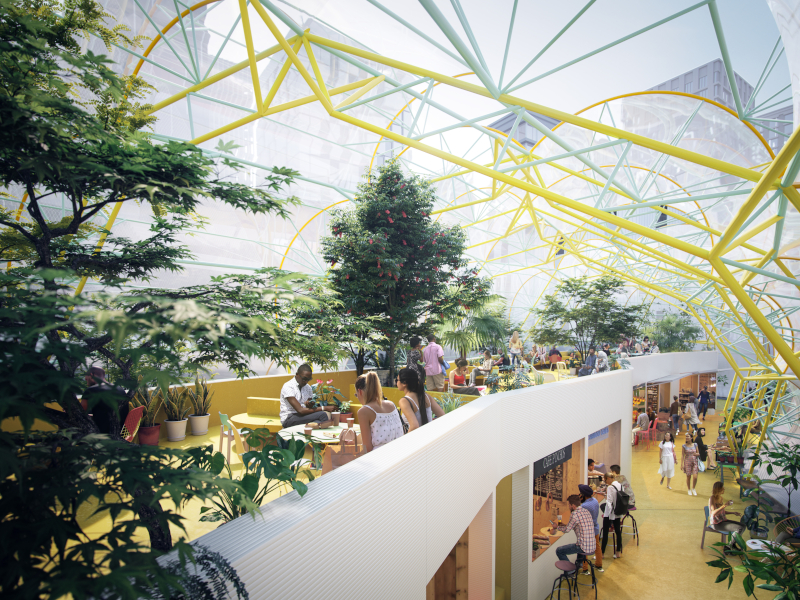 Matt Dearlove, head of design for Greenwich Peninsula’s upcoming Design District, explains how the project will change the face of London design

What does your role as head of design for the Design District encompass?

I helped develop the brief at the outset of the project, getting the right design team on board and making sure the concept and vision are in place throughout the design process. Then, as the project gets planning and comes on stream, my role switches to safeguarding the design through the construction process, all the way to completion.

What is your ambition for the Design District?

The ambition is for it to become one of the real design centres of London. If you ask an architect or designer where the hub of London design is they’ll probably say Clerkenwell, or maybe Shoreditch. It would be fantastic if the Design District became one of the recognised design centres in London, one that attracts creative talent – a place where things happen. There will be 15,000sq ft of studio space at the Design District, which will provide work space for some 1,800 people. This district was part of the 2015 master plan for the site [to regenerate the former industrial area], and we decided to bring its development forward as a way of making a major change to the feel of the Greenwich Peninsula as a whole. When it’s finished, it will bring a real vibrancy to daily life.

Did you visit similar developments elsewhere as part of your research for the Design District brief?

We looked at workshop providers and artists’ studios, and tried to find spaces with a scale that we could learn lessons from, such as Perseverance Works in Hackney, Neal’s Yard in Covent Garden and Ham Yard in Soho. We like the idea of places where you can meander through, places where you can get lost but quickly find yourself again, and where there is a sense of surprise and intrigue. We also looked at some small creative districts in Tokyo, and were quite inspired by Moroccan souks.

One of the key drivers was the rent – we want to make it affordable, so we have set a blended rent of £25/sq ft (compared with about £50/sq ft in Shoreditch). Some of the more established companies will pay more to cross-subsidise the less established. The idea is that the Design District will give students leaving Ravensbourne University on the peninsula the option of staying in the borough, rather than going elsewhere in the capital to find affordable studios.

How will the master plan shape the Design District once opened?

HNNA had supported Allies and Morrison on the 2015 master plan, and we asked it to do a design study to test ideas. This naturally evolved into a revised master plan for the Design District. The peninsula has such a big scale, and we wanted to use the new master plan to create a Design District on a more intimate scale. There is one central square, surrounded by four clusters of buildings, with each cluster grouped around its own courtyard.

It might have been more efficient to have a smaller number of buildings with big, adaptable floor plates, but this was about creating a place that felt right for the creative industries – a place with character. By having 16 buildings with small floor plates, we are deliberately excluding larger, long-established businesses.

The district involves 16 buildings by many different designers and architects. Why did you decide on this strategy?

There’s a rich heritage to the site in terms of generating power for industry, but very little of it is left. The relatively blank canvas was a real opportunity to experiment. We knew we wanted to deliver places that would be attractive to a creative audience, and hopefully recreate, in terms of intensity, what you’re more likely to find in a more established creative place. And that’s why we wanted to employ a collection of different architects with a mix of styles. We want them to create playful, witty buildings, and we recognise that some might have Marmite moments and divide opinion. We want people to look at them all and think ‘I really want to be in that particular building’.

How did you choose the designers for the individual buildings?

We had a long list of 20 or so practices we were interested in, including some we’d previously spoken to but hadn’t been able to work with yet. We ranked them, and after meeting them to make sure we were confident with them, asked the first eight practices if they’d design two buildings each. They all said yes. We’ve gone for a group of architects with very different aesthetics and approaches – 6A Architects, Adam Khan Architects, Architecture 00, Barozzi Veiga, David Kohn Architects, Mole Architects, HNNA and SelgasCano. We have the same team – of structural engineers Whitby Wood; M&E engineer, Skelly and Couch; QS/Project Manager, Artelia – across all the buildings, and the whole place is pulled together on the ground floor by a landscape design by Copenhagen practice Schulze+Grassov.

How much freedom did the individual designers have?

We didn’t want them to design to rules and constraints – we wanted them to express themselves and do their thing. So, for example, there is no specific floor-to-ceiling height requirement. Currently in construction, the Design District team hope to have its first tenants in place by the end of this year. Image Credit: TARAN WILKHU

However, we have made efficiencies by having a single core for each building and a single entrance, and by having the same specification for elements such as lifts, ironmongery and sanitary ware.

Throughout the district, the idea is the heavy machinery and workshops will be on the ground floor, with open plan, desk-based activity on the floors above. Then, on the top floor, we wanted the design teams to take advantage of the natural light. Some of the architects have put a lantern on the top, and 6A, for example, has designed a 7m-high floor-to-ceiling space for studios or events.

We were keen that the design teams initially worked ‘blind’ so that they didn’t know what the other teams were doing, and we only shared everyone’s designs when the design concepts were established. This definitely resulted in some moments of serendipity. Then the teams started talking together using Slack and made some minor tweaks to their designs.

It’s been a really great design process with a nice sense of camaraderie between the different design teams. It’s now at an exciting stage as the buildings come out of the ground and the whole district comes together.

What other design opportunities will there be for you to commission for the district?

There will be some art to commission for David Kohn’s buildings, which have art niches, and some interior work for a couple of buildings. But after that, we’ll let the tenants write the next chapter as they evolve their fit-outs – the units are essentially shell and core.

It’s been really fun for me to work with eight architects concurrently. I’ve done it on a master plan before, but to have all these buildings on-site is quite unique. The best thing has been providing the brief and opportunity for other designers to express themselves and seeing it all come together. The hardest thing has been making those difficult decisions as we weigh up the pros and cons of delivering on cost, time and quality.

When do you hope the first tenants will be able to move in?

Covid-19 has delayed things, but we’re still hoping to complete the eight southern buildings and get our first tenants in by the end of the year. The eight northern buildings will follow a few months later.

What do you feel will be a sign of success for the Design District?

Having every building occupied, along with the noise and dust of buzz saws and other activities, and people sitting around in the sun drinking a flat white or a beer after work. I’d like it to be on people’s mental map of London. At the moment, when you think of the Greenwich Peninsula, you might think of the O2. Maybe soon it will be known for the Design District too.