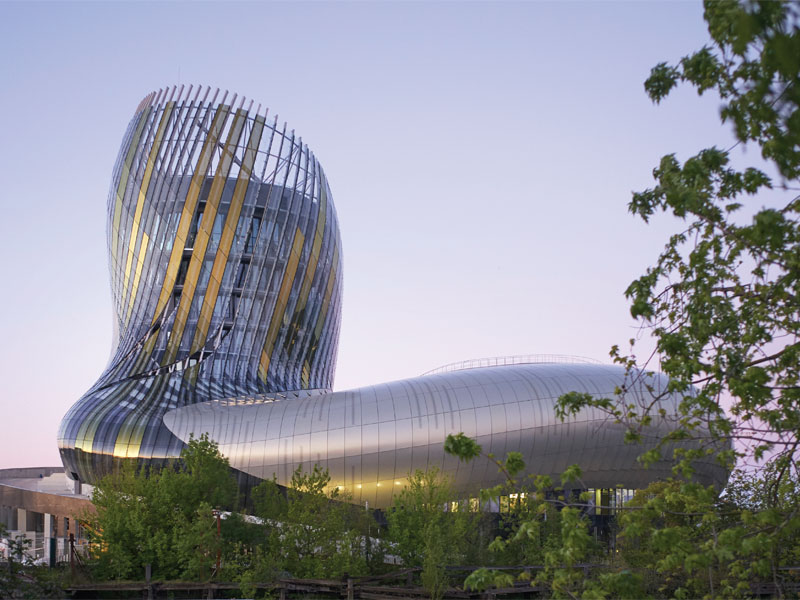 The original straight-edged plans for a museum of wine in Bordeaux went out of the window when the architects Anouk Legendre and Nicolas Desmazières drank a glass of one of the world’s best wines. From that point on, what has become the Cité du Vin, in collaboration with Casson Mann, had to be deliciously voluptuous.

Five years ago Anouk Legendre imagined Bordeaux’s new Cité du Vin as a perpendicular monolith, as tall and striking as the design for a £60m-plus landmark museum demanded, but distinctly straight-edged. Then she and partner Nicolas Desmazières were served a glass of one of the 10 best wines in the world during their research phase in the Médoc and their vision underwent an utter, unashamedly alcohol-fuelled metamorphosis.

‘Everything changed,’ the Paris architect giggles, rolling her eyes in illustration of how inebriation at the most elegant and rarified level can alter your perception and banish the inhibitions of viable engineering. ‘From that point on it became a round building in my mind, entirely voluptuous and delicious.’ Legendre and Desmazières, a couple in life as well as business, were right to let their senses lead them in a crazy, close to unrealisable direction. The daring imagination of Bordeaux’s new flagship museum as a swirling mass sitting close to the earth, shimmering gold on the horizon like a glass of fine Sauternes, won them the contract against 100 competitors who bid for the project from all over the world. It is hoped that wine pilgrims to Medoc will now spend a while at the museum and in the city of Bordeaux. Image Credit: XTU / P Tourneboeuf

Never mind that some think this strange construction incorporating a doughnut flowing out of a tower looks like a foot stomping grapes, while others take it to resemble a pot-bellied decanter — if anything, say the architects, it’s a gnarled vine stock, superimposed with an evocation of wine swirling in a giant glass. Never mind that budgetary and technical constraints meant it lost 5m in height and the huge run of curved exhibition space inside the swirl could not, as first envisaged, be realised entirely in glass, rather in panels of lacquered aluminium glinting with mica. An aerial view shows the proximity of the river. The building’s shape has been variously interpreted by observers and fellow architects. Image Credit: Julien Lanoo

Actually, it is an Anglo-French triumph, since ‘from the start we asked for collaborative pitches from architects working with scenographers who would stage the content,’ explains Cité du Vin CEO Sylvie Cazes. Enter Casson Mann, acclaimed for work at the Imperial War Museum, Science Museum and V&A. They worked with XTU, as the Paris-based architectural team styles itself, from the outset. A view up through ‘the doughnut hole’ to the ‘swirling glass’ tower. The gold colour reflects the natural tones of the nearby Garonne river, which picks up the yellow of the sandy bed. Image Credit: XTU

‘We had a brief to engage every one of the projected half-million visitors expected every year — children and nonwine drinkers as well as the amateurs du vin,’ says Roger Mann, as we walk through every one of the partnership’s 21, highly entertaining, modules. ‘We spent a fortune on filming winemakers around the world and shooting aerial footage of great vineyards on every continent, but we saved a lot by not having to build showcases for any objects. The objective from the start was not to have an old wine press or a dusty wine bottle in sight!’ he says of the almost entirely digital content. With not an old wine press or dusty wine bottle in sight, the exhibition spaces designed by Casson Mann are largely digital - videos of flights over vineyards, growers’ interviews, even a whirling pit of nightmare hangovers... Image Credit: Julien Lanoo

Visitors are stopped in their tracks on entry by three 4m-high screens dovetailing thrilling helicopter flights over 25 of the world’s most arresting vineyard landscapes, including the unexpected — Oshkegon, Canada, the Greek island of Santorini and French Polynesia — as well as the more obvious, including inevitably a hearty nod to the chief sponsor, Bordeaux. With not an old wine press or dusty wine bottle in sight, the exhibition spaces designed by Casson Mann are largely digital - videos of flights over vineyards, growers’ interviews, even a whirling pit of nightmare hangovers...Image Credit: XTU

While fusty objects have been banished, content has not entirely been dumbed down; the scenic film is followed by a touch-table that brings to life winegrowers from key wine producing areas around the world who pop up at the touch of a button to talk about their life in the vines. Then it’s time for some levity inside a giant plywood box meant to resemble a wine crate, inside which dioramas show the history of fermenting the fruit of the vine with a dose of humour. Exit and you have to face the whirling pit of hangover nightmares before continuing on to the taste and sniff section: ‘It was a requirement from the start to address the dark side of drinking,’ says Mann, whose two-minute film on the subject fits the bill. With not an old wine press or dusty wine bottle in sight, the exhibition spaces designed by Casson Mann are largely digital - videos of flights over vineyards, growers’ interviews, even a whirling pit of nightmare hangovers...Image Credit: Julien Lanoo

The designer admits to a ‘lively debate’ with the architects throughout the three years since the contract was won, as Legendre and Desmazières’ immovable position on preserving the architectural integrity of the project posed more than a fair share of headaches. ‘We insisted on the interior volumes echoing those of the exterior,’ says Legendre, influenced by her disappointment in Frank Gehry’s Paris building for Fondation Louis Vuitton: ‘All sails on the outside, but inside it’s just another box.’ From Mann’s point of view, a flat ceiling to suspend projectors from would have been far less challenging than the soaring vaults of the Cité du Vin’s exhibition space, supported by arches of the wood inherent in wine’s heritage — the stuff of the barrels the fermented grape juice is aged in, the crates the bottled product is shipped in and the timber boats that first carried claret out to the wider world half a millennium ago. With not an old wine press or dusty wine bottle in sight, the exhibition spaces designed by Casson Mann are largely digital - videos of flights over vineyards, growers’ interviews, even a whirling pit of nightmare hangovers... Image Credit: XTU / Aanaka

Those who might have preferred a swirling glass the colour of the claret that at premier grand cru classe level is the world’s most valuable wine, have the natural gold of the Garonne on the museum’s doorstep to blame. ‘The colour of the river, which picks up the yellow of the sandy bed, made gold a much more harmonious choice than the red, our original notion,’ says Legendre, who gained an innate understanding of the city’s natural attributes during her years as a student of architecture in Bordeaux. The fact is that pale gold is also the colour of the limestone facades of the magnificent 18th-century buildings that have made the city centre a World Heritage Site. With not an old wine press or dusty wine bottle in sight, the exhibition spaces designed by Casson Mann are largely digital - videos of flights over vineyards, growers’ interviews, even a whirling pit of nightmare hangovers... Image Credit: Nick Guttridge / Casson Mann

While Bordeaux followed the example of Bilbao before commissioning the project — not only sand-blasting those glorious facades but also cleaning up a riverfront that for centuries had been visually polluted with redundant and unsightly warehouses, and laying tram-lines to combat city congestion once and for all — they could not give the architects the gift of the city skyline presence Gehry’s Guggenheim enjoys.

The 78m-long Pont Chaban-Delmas elevator bridge, not yet constructed when the museum design was conceived, dominates the riverscape from its location between the city proper and the Cité du Vin. It sits uneasily in the still-evolving industrial neighbourhood of Bacalan, to which port activities have moved. Bordeaux was unable to give the Cité du Vin a city skyline presence. It sits in the still developing industrial area of Bacaclan, to where port activities have moved. Image Credit: XTU / P.Caumes

‘The presence of the bridge was a factor in determining the height of the museum,’ says Desmazières of efforts at prominence with a circular glass tower housing offices and the magnificent eighth-floor wine bar where visits conclude with an all-inclusive tasting session of world vintages.

‘We saw very quickly that we could not focus on just the wines of this area,’ explains Cazes who, as former president of the Union des Grands Crus de Bordeaux before becoming CEO of the Cité du Vin, was well aware of the huge prejudices she had to overcome. Her predecessor had tried for 20 years to gain sponsorship from a quarrelsome and inward-looking group of vintners not originally persuaded of the need to look outward and create a museum that would be a universal celebration of wine as an essential part of dining enjoyment, religious ceremonies and mating rituals as well as world trade. ‘But we did have to keep them happy with a final two modules focusing only on Bordeaux,’ she admits drily, satisfied that the chief beneficiary will be the city itself.

Currently, every year half a million wine-lovers rush through en route to the Médoc or the right-bank vineyards of St Emilion and Pomerol. The Cité du Vin will give them a reason to spend a night in Bordeaux itself researching their passion, and perhaps discovering why locals have voted the city, hitherto somewhat undervalued by tourists, the best place to live in France.
1 of 2