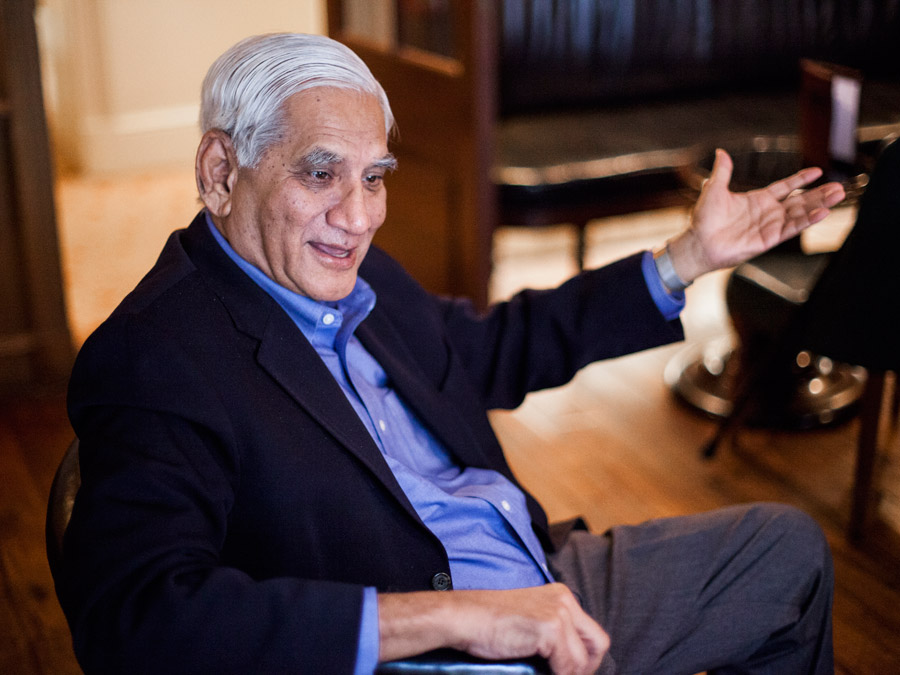 A personal memory of perhaps India's greatest architect, Charles Correa, and a profile from his 2013 London visit

When I heard that the great Indian architect Charles Correa had passed away on Tuesday, 16th June in Mumbai, aged 84, I was set back, saddened... and a little surprised. Set back, because in a world of architecture characterised by starchitects and sensational corporate and cultural projects that spill forth from ever-sharper digital design tools, he was one of the world's few true giants of architecture, who never lost touch with simple ideas and a timelessness that came out of India. His buildings, including the Champalimaud in Lisbon, are simply sublime. His last designed structure opened in Toronto just last year, and I always hoped there might be more to come.

I was saddened because I was very lucky to have spent time with Charles, more in conversation than in interview. The first time was in Mumbai in 2011, when he was still working in offices in Mathew Street, the sound of the Churchgate trains across the road muffled by the concrete modernist building. As I expected, he was white-haired, distinguished, authoritative. But he was also a little mischievous, self-deprecating, and disarmingly warm. He dismissing my list of questions ('that's far too much!') and instead launching into some of his anecdotes, such as about the two village men (a dhobi washer and a money changer) on the same Bombay bus.

He may have wheeled these anecdotes out many times, but they un-derlined his passion for cities and his vision of them as tools of social change and hope. He foresaw how Bombay would explode with people, and had a brilliant plan for how to deal with it- only parts were im-plemented. He had solutions for the proliferating homeless- largely ignored. He had a strategy for Mumbai's Mill Lands, and despaired as in-stead they became gated high-rises for the super-rich. The warmth he felt for the city and the people was something he could extend to you, if you were sitting with him.

And I was surprised that it was Mumbai where he died. The man himself would have called it Bombay, of course, because he lived and worked there for so many decades before the Maharashtri government changed the name. In recent years, he had pretty well returned to his native Goa, where he was when he sent me a brief email just two weeks ago. He was engaged with the Panaji city government there about various issues in recent years.

Below, we reproduce the Blueprint profile originally published in August 2013, to coincide with a RIBA exhibition about him that rightly positioned him amongst the greatest living architects. He no longer lives, but his buildings do, and so hopefully will his ideas.

Mahindra Research Valley in Chennai is Correa's most recent completed work, opened in 2012. It hosts a research and development facility working on future cars for a leading Indian industrial conglomerate

In London in 2013, Charles Correa talked to Herbert Wright about the buildings from his career that he'd like to be remembered for, choosing from a portfolio that goes from the Gandhi Memorial Museum to the Ismaili Centre, Toronto.

Asked what building in his 54 years of output he would most like to be most remembered for, Charles Correa suggests that the question should rather be 'the other way around - which would I like bombed!'

It is typical of the man, from whom flows wisdom in a warm voice, peppered with fiery pronouncements such as his reaction to the City of London's glass architecture bonanza: 'I would have thought they would be ashamed about everything they were doing - [the buildings] look like a bunch of spare parts.'

More like a mischievous elder statesman than a guru, he is tall, dignified, and, at 82, is still getting around the world albeit with a walking stick. But he insists he has designed his last buildings - the recently opened Mahindra Research Valley, Chennai (typically spatially exciting and colourful), and the Ismaili Centre in Toronto, currently under construction.

Now based in Goa, Correa quit his office in Mumbai; for the past two years has been occupied with the digitalisation of his entire archive, including some 6,000 images, which he has recently assigned to the RIBA. 'In India, we have no [appropriate] facility', he says. 'MIT wanted them to begin with, but I thought that the RIBA would be a better place, more central and open to dicussion - and more interested in India,' although he says they belong there also. 'I knew that I had to scan all the drawings so that they would be available in India'.

Correa credits a Hornby toy railway set he had as a child as sparking his interest in architecture - later finding he could read architectural plans because of the meticulous drawings for track configurations. After graduating from St Xavier's College in Bombay (called Mumbai since 1996), he went on to Michigan University and MIT, at both of which Buckminster Fuller taught.

'We became good friends, he used to come out to India. He was a big influence in the sense that I liked him because he was an inventor and wasn't trained as an architect.' Indeed, Correa recalls an interview in which Buckmister Fuller said architecture is an invention, 'which I thought was wonderful... What on Earth is it but a great invention? Other MIT figures would inspire him, such as Kevin Lynch: 'His slogan was "Let's put design back into planning".'

Kanchanjunga Appartments (see next page) in Mumbai anticipates the high-rise residential boom there. Unlike contemporary towers, it offers an indigenous climatic response with its two-storey terraces based on the bungalow veranda, which also give it a unique iconic profile

So did past masters such as the Sri Lankan museologist Ananda Coomaraswamy, Egypt's Hassan Fathy, who built with mud, and Frank Lloyd Wright, inspire him too? Of Wright, he says: 'He was self-taught, working from instinct, which is important because these things come naturally but become diverted through education when you begin to think, "Oh no, that's what the Greeks did". Nonsense! He had no idea what the Greeks did. He just invented the way America could live.'

India gained independence in 1947, and when Correa returned in the Fifties the nation carried the optimism of a nascent and ambitious democracy. Did he feel the weight of having to create a national identity? 'It wasn't a weight,' he replies, 'it was a wonderful opportunity because it's exciting!' With his great contemporary Balkrishna Doshi (see archive, p95), who worked with Le Corbusier on Chandigarh, he discussed setting up together, but refrained: 'Architects are much more like loners,' comments Correa. 'We can exist like camels, but we also do need a chance to touch base and see what other people are doing.'