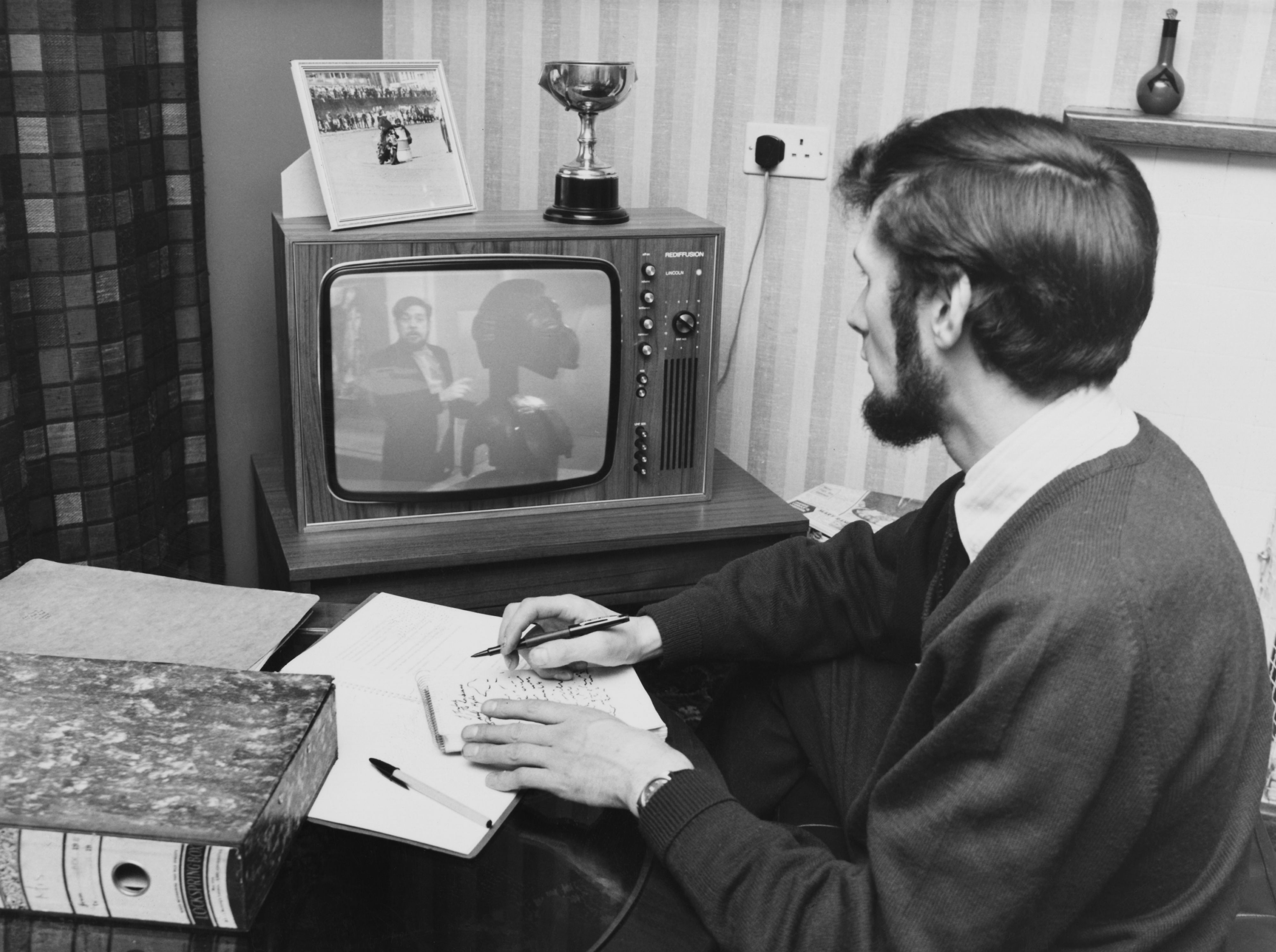 Herbert Wright visits The University Is Now on Air, an exhibition that explores the Open University’s groundbreaking architecture course… which was broadcast on television.

Portuguese academic Joaquim Moreno stands in an underground gallery called the Garagem Sul, below the Centro Cultural de Belém in Lisbon, at the opening of a show he has curated. ‘This is media archeology’, he says, and he’s been ‘nerdy’ about digging into it. He’s talking about a feast of material gathered by the Canadian Centre for Architecture (CCA) — the content and much of the supporting physical infrastructure of a very special course called A305: History of Architecture and Design, 1890-1939. The course was offered by the UK’s Open University (OU), the first project anywhere in the world in which higher education reached out via television.

Working with the BBC, the OU bypassed and challenged the traditional model of campus-based teaching, and its effect echoes around the world today, not least in the rise of massive open on-line courses (MOOCs). However, as researchers often find, twentieth century archives often simply don’t exist on the internet; the CCA and Moreno have rescued A305 from offline obscurity. Following an opening run in Montreal, their Lisbon exhibition exploring the course is called The University Is Now on Air - Broadcasting Modern Architecture UK 1975–1982, running until 26th May.

The University is Now on Air at Garagem Sul, Lisbon. Photo: Tiago Casanova

At nine in the morning on 15th February, 1975, A305 first beamed into every television set in the UK tuned to channel BBC2 — perhaps 40,000 at the time. For the first minute, there was silence; viewers saw a series of architectural sketches and a few handwritten words, all in black and white. Today, we’d call it lo-fi. Presently, an architect called Geoffrey Baker (nowadays published as Geoffrey H Baker) appeared and began talking in a deliberate, clear but clipped way, deconstructing the approach he took designing his house near Newcastle.

Baker’s An Architect at Work presentation set the tone for the whole of the A305 course. It demystified architecture and resonated with the OU’s agenda of liberating knowledge and insight from the confines of academia’s ivory towers, so that anyone and everyone could access it — those who enrolled as students (which 718 did for the initial course) or just watched casually, as you might a documentary.

Curator Joaquim Moreno examines original material with Nck Levinson in a still from a film by Shahib Mihandoust, July 2017 © CCA

In another way, Baker’s opening presentation was uncharacteristic amongst the 24 television broadcasts, (all 24 minutes long) because it was contemporaneous, rather than within the course’s 1890-1939 time-frame – although Baker did cite le Corbusier and others as he explained his thinking. The same applied to the course’s 32 radio broadcasts, which included ‘radiovision’, flagging up illustrations for listeners to consult in a ‘Radiovision booklet’.

The exhibition is comprehensive, showing us not just A305’s course content but an insight into the OU’s origins and its vast supporting operation. Key players in the establishment of the OU, including planning committee chair Peter Venables, first chancellor Lord Crowther, prime minister Harold Wilson, and evangelical advocate Baroness Lee of Asheridge, appear in a semi-circle of blown-up photo-portraits as if in a shrine to socialist heroes, which indeed they were. The whole concept of the OU was progressive and utopian, in the same spirit as the welfare state.

As to A305 itself, we discover from the exhibition’s extensive wall-blurbs that it had personal tutors in 13 regions (they each ‘had their own voices’, notes Moreno), and a vast supporting operation. Just as the OU was the ancestor of today’s MOOCs, its own ancestry was correspondence courses. The OU itself did three mail-outs a week, to up to 10,000 students, tutors and staff, and we get a glimpse of that operation in the show. We also see A305’s course books and support material, such as the Radiovision booklet spread across vast tables. The OU as a whole employed 25 in its Graphics Department; the crisp, modernist graphics style of the times seen in the items on display now takes on a retro-chic. The parts of the show about the non-broadcast aspects of the OU gives it a dimension somewhere between a museum and library.

However, as Moreno says, ‘the relation between books and TV was reversing’, and it is the A305’s transmissions themselves that are the heart of The University is Now on Air. It reveals some of them on little plastic 70s TV sets with period chairs to view them from – it’s a nice touch in the expansive space at the heart of the show’s lay-out. Television could take its audience to buildings unlike any book, and the buildings A305 revealed ranged from Frank Lloyd Wright’s Robie House (1910) to Erich Mendelsohn’s Einstein Tower (1921) in Potsdam.

In the case of le Corbusier’s Villa Savoye (1931), we see how architectural plans were altered to make them readable in a televisual way – the thin lines of an actual architectural plan, for example, would simply not show up on a 70s TV screen. But the subjects weren’t all iconic buldings or great names like Loos or Scharoun; radiovision content included themes from concrete to Soviet architecture, and there was a whole TV broadcast about English furniture.

The 1970s were a time of ‘rising tension between council housing and suburban housing’, comments Moreno. A305’s material is there amongst its roots, because it looked at both the private ideal house – such as Baker’s own near Newcastle or the Villa Savoye – and social housing. An example of the latter is Quarry Hill, a fortress-like modernist megablock by architect RAH Livett, built in Leeds 1934-41. Tim Benton looked at the estate in his presentation English Flats in the Thirties, just two years after its demolition was approved. In hindsight, its story was a premonition of what would repeat in post-war council estates across the UK, and beyond.

Designed to realise utopian ideals on a massive scale, but built poorly, Quarry Hill sank into disrepute, yet to the end maintained the loyalty of many residents who remembered the slums they lived in before. Moreno observes that Quarry Hill ‘was made to fail’ and that ‘TV was participating in the demonisation’. A305 was complicit, but, as he says, its account ‘was nuanced’. The course’s final broadcast, like the first, stepped out of its 1890-1939 time-frame; Stephen Bayley’s The Housing Question looked at projects including the LCC’s Roehampton Estate (1956), Goldfinger’s Trellick Tower (1972), and Ralph Erskine’s Byker Wall (under construction when the programme transmitted). Tellingly, it gave early notice of the ‘social problems’ that were to redefine perceptions of social housing.

Thanks to the CCA, every A305 broadcast is now online here — you can binge on this as ‘edutainment’ with a retro charm but you’ll find that the educational value is still strong and direct. The exhibition itself also presents current interviews, a series of oral histories that recollect and give hindsight from key figures such as Tim Benton and BBC producer Nick Levinson. Interestingly, Moreno led his students at the Architectural Association through A305, and he reports that ‘for most of them, it was a strange format… it was puzzling’.

Does the course carry any relevance for today? Moreno says that MOOCs raise questions about ‘who produces knowledge and who is responsible for higher education’. The OU was a direct challenge to the academic teaching tradition, yet was a radical initiative by the state. With universities engaging in increasingly neo-commercial competition for students and sponsors, the paradigms of academia are very different today, but perhaps they too need to be challenged – maybe the OU offer clues. Certainly, A305 raises issues that are very much alive today, such as the ‘housing question’. In our times, developers have replaced the state as the deliverers of housing, and community has become a lifestyle branding tool. Yet after all these decades, we still need more, and better, housing.

The University Is Now on Air reminds us that new technology-based mass media hasn’t always been as out of control as today – driven by algorithms and subject to the whims of corporations, purveyors of instant gratification and populist tides. There’s plenty of wisdom online, but it’s getting harder to see; we need all the help we can get to push it back to the fore. The OU may hold clues on how to do it. That alone is why this comprehensive, polemic exhibition about the OU deserves our attention. 40 years ago, the CCA was created to ‘try to make people think’; the show and a book of the same name, and not least those A305 broadcasts now online, do just that. In contemporary media terms, The University is Now on Air deserves a massive ‘Like’.

The University Is Now on Air - Broadcasting Modern Architecture UK 1975–1982 is at Garagem Sul, Centro Cultural de Belém Foundation, Lisbon until May 26, 2019.