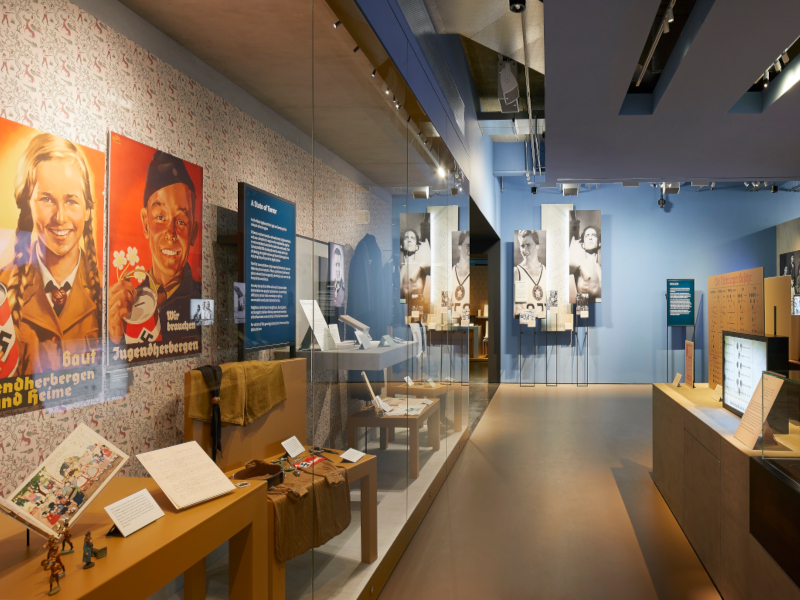 London The Holocaust and Second World War exhibits, part of a £30.7m refurbishment, make a vital contribution to the narrative

‘WHAT YOU REALLY WANT is complete clarity,’ says Gary Shelley, director of Casson Mann, of the approach taken to creating the Holocaust Galleries. ‘We needed to bring things into the light – you need complete visibility.’

Created over five years in collaboration with IWM curators, the new galleries avoid the darkened, hushed treatment of many Holocaust presentations in favour of clear narrative and light-filled legibility, combined with compelling exhibits, individual stories and large-screen media. 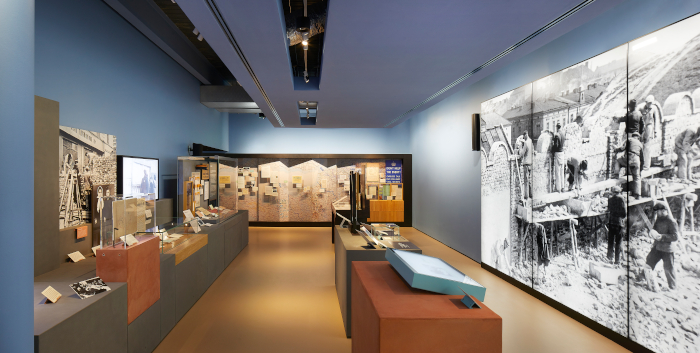 The galleries portray the rise of Nazi antisemitism, the increasing restrictions on Jewish life and the death camps. Image Credit: HUFTON+CROW

This powerful approach is used to enlighten and engage throughout the galleries, which span several decades from before the Holocaust through to the aftermath of the Second World War and the Nuremberg trials. Setting an appropriate tone was one of the main challenges facing Casson Mann, along with navigating the sheer quantity of artefacts, and the black and white format of archival photographs, which can present, says Shelley, a barrier for visitors.

The designers used many techniques to illuminate the narrative. The use of the stories of individuals and their experiences is compelling, and always told contemporaneously rather than with the lens of hindsight. Photos are generally kept small, in that way he says they feel more vulnerable and delicate, and often shown at eyelevel to increase the connection. There are some exceptions – in an early gallery showing the lives of Jewish communities around Europe prior to the Holocaust, life-size cut-outs of photos further bring the individuals’ experiences to life. 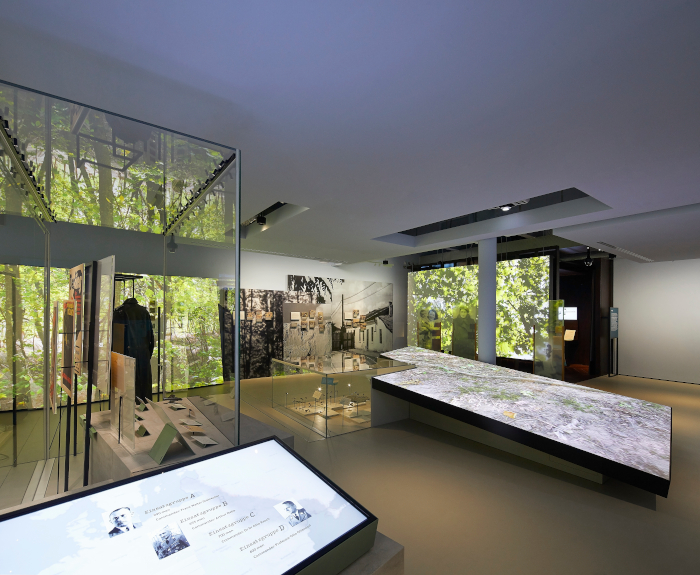 One exhibit features a motion graphics map demonstrating the number and method of Jewish deportation by the Nazis. Image Credit: HUFTON+CROW

‘We know from experience that people really relate to personal stories,’ he says.

‘We’re not thinking of them as victims, but as people with hopes, aspirations and stories.’

In a later gallery, a similar technique is used to show leading Nazi figures as people rather than mythological figures, underlining that rather than being an industrial slaughter, the Holocaust was very much about ‘people doing it to people’. 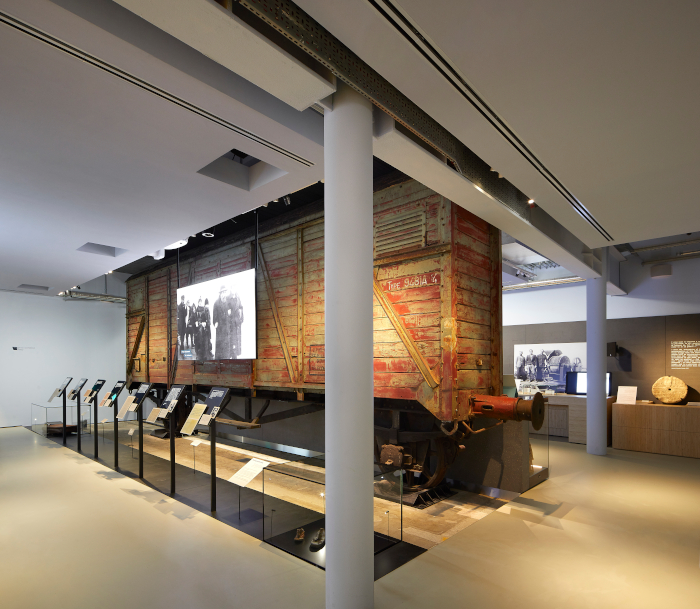 Real artefacts and testimonies are displayed without ‘making theatre’ to avoid a sense of fakery. Image Credit: HUFTON+CROW

After setting the historical context, the galleries convey the rise of Nazi antisemitism including the escalating restrictions on Jewish life, the ghettos, transportation, the death camps and other locations for massacres. Throughout, says Shelley, it was important that there was no sense of fakery in the presentation, just real artefacts and testimonies displayed without ‘making theatre’. So there are no heaps of the objects people left behind in the death camps, just single items displayed individually. In the sections on the killing sites, photos are left small to convey the fragility of life rather than enlarged as big images of suffering.

To aid understanding, a common backdrop of domestic light oak is used for the personal stories of perpetrated Jewish people, while a dark, mahogany shade of oak was used for the perpetrators. The graphic treatment was also carefully considered. Quotes associated with perpetrators all use a font taken from the typewriter keys of a Nazi governor in the Netherlands who ordered deportations and murders of Dutch Jews. First-person testimonies of the perpetrated who are known to have subsequently been killed are illuminated.

Media design by Squint/Opera, in particular the use of large-screen visuals, played an important role in creating an immersive atmosphere. At the entrance, and interspersed throughout the galleries, large screens display contemporary footage of key locations including woodland sites of massacres, the latter presented in a calm and contemplative manner and inviting reflection. In this way, they are presented as pieces of evidence according to creative director Vadim Charles, that serve to convey ‘the presence of the absence’.

Other pieces required different treatment. A media piece inspired by the relentless anti- Jewish Nazi propaganda has a deliberately rough, glitchy quality, which seemed more appropriate, says Charles, than something more slick and polished. One of the most effective pieces is a motion graphics map illustrating the quantity and passage of Jewish people across Europe as part of the Nazi-organied deportations. As per the overall design approach, the maps are light in tone rather than dark – it is all about legibility.

Pacing and variety was crucial to help visitors maintain engagement and navigate such a difficult subject, and Shelley is pleased that some people are spending up to three hours in the exhibition, a clear sign that both the content and its presentation have hit the mark.

ONE OF THE key missions of the IWM’s new Second World War galleries was to tell the story of a truly global conflict rather than just portraying a British-centric narrative. Given that research revealed at the opening of the galleries suggested a shocking lack of knowledge – a YouGov poll found that only 58% of 16–26 year olds knew that Japan was Britain’s enemy – this is very much needed. But it presented a huge challenge to both curators and designers – how to communicate this complex, multifaceted conflict in a way that was wide-spanning but also personal.

As with the Holocaust Galleries, the use of contemporaneous individual stories to connect with visitors, plus a combination of artefacts and compelling mixed-media presentation, was vital to engagement and understanding. 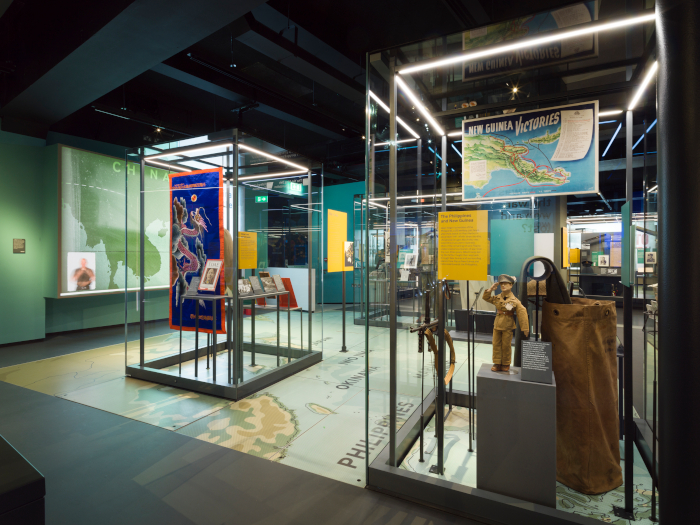 Ralph Appelbaum Associates set out to portray its global nature in the Second World War Galleries through the stories of those who lived in the conflict. Image Credit: ANDREW TUNNARD

‘We had to find a way to show the global context of these different, simultaneous conflicts and present the personal experiences within that,’ says Patrick Swindell, director of Ralph Appelbaum Associates. Along the way, he was keen to challenge a few misapprehensions: ‘It’s a global story – we didn’t win the war alone,’ he says. 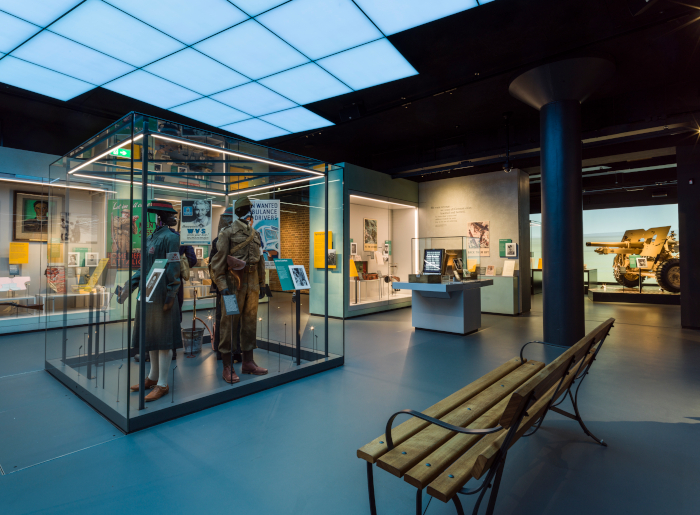 Designers maximised sight lines throughout the galleries to reinforce the idea of the conflict as a series of intersecting events. Image Credit: ANDREW TUNNARD

Using the stories of those who lived through and participated in the conflict, in tandem with pertinent artefacts, was a key strategy to engage the visitor in the narrative. This includes the testimony of more than 100 individuals from all walks of life. These personal perspectives encourage an emotional connection with the now-distant events. We are also invited to question our preconceptions – a newspaper interactive invites visitors to consider their own take on key wartime events, such as the Dunkirk evacuation.

There is still plenty of content on the UK experience, but always set in the wider context – in particular the important role of the empire. The 1940s house that was a popular feature of a previous IWM gallery has been deconstructed and recontextualised. While retaining objects such as a Morrison bed-beneath the dining table shelter, the designers were also able to take a slightly more playful approach to the setting, with wallpaper created in 1940s style but using vintage photographs in the pattern; embroidery samplers that incorporate war time quotes and a vintage radio that can be tuned to listen to different countries’ reporting of the conflict. 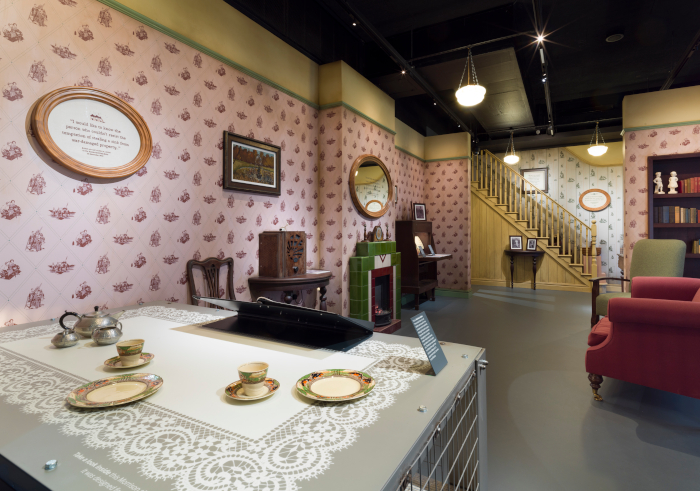 Designers maximised sight lines through the galleries to reinforce the concept that the conflict was a series of intersecting events and ideas. This approach is taken further by the removal of part of the ceiling in one of the galleries to link the Second World War exhibition to that of the Holocaust Galleries above, not just spatially but in terms of content: hanging between them is a V1 flying bomb, the cause of so much aerial destruction, manufactured in tunnels dug by forced Jewish labour.

The use of specially filmed contemporary footage shown at large-scale throughout the galleries was an important way of bringing the different theatres of war to life. Ranging from wintry Russian forests to lush Philippine rainforests, these are particularly evocative when shown as the backdrop for the uniforms of the soldiers who were fighting there. And as with the use of contemporary footage in the Holocaust Galleries, this helps to reinforce the link between past and present. There is also archive footage, including a film of the Battle of the Atlantic that forms the backdrop for a sculpture showing the numbers of different vessels lost. 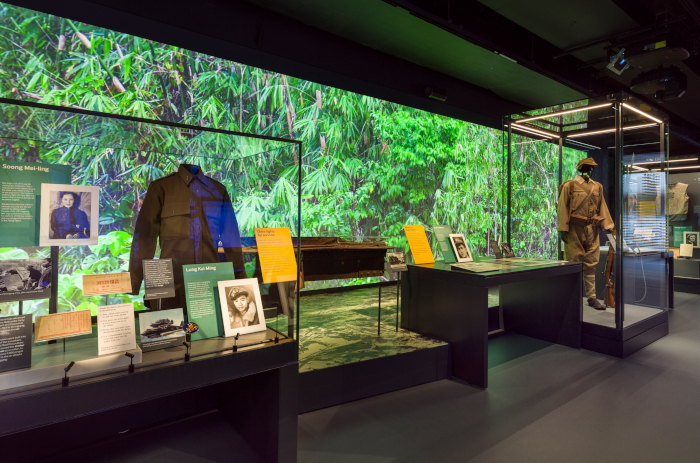 Using a variety of backdrops, such a Philippine rainforests, as a backdrop for the uniforms brings the different theatres of war to life. Image Credit: ANDREW TUNNARD

‘When storytelling is delivered through interpretation of objects, you need other stuff to set the scene and to set the tone. Then, the written work doesn’t need to do such heavy lifting,’ says Swindell.

Likewise, mindful of visitor fatigue as the exhibition progresses, RAA made use of media such as floor maps to convey the resolution of complex conflicts in the Pacific, Eastern Front and Western Front, and included more linear, didactic media, as well as a viewing room for films. The exhibition concludes with a gallery on the legacy of the war, including the War Crime Trials and the formation of the NHS, which again reinforced the connection with the present day.