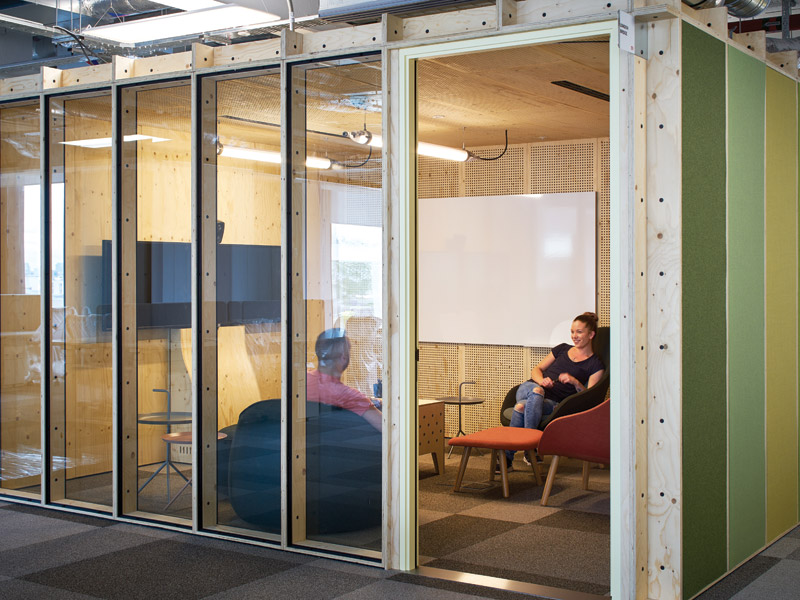 Easily demountable and flexible meeting spaces – Jack pods – have been added to the Google HQ by AHMM.

Called Jack, the pods can be erected, extended and dismantled in a couple of days, to help accommodate the staff’s ever-changing needs for different work settings.

Jack’s base module is a frame to which front and back panels are fitted to form cassettes. ‘Some panel surfaces are determined primarily by technical requirements,’ explains AHMM associate director Ceri Davies. ‘So, the glazed units not only provide an obvious visual connection to the open-plan office space, but are also part of the fire strategy in that a fire load (whether within or outside of Jack) can be spotted quickly.’ Likewise, the perforated plywood performs an acoustic role and, in a secondary role, ancillary accessories can be attached.

The first layer of plywood ‘closes’ the cassette and is screw-fixed, giving the tight fit needed for acoustic performance. The second layer (such as pin boards, acoustic panels and magnetic whiteboards) are ‘hung’ on a bespoke metal strap system, so that they can be interchanged or replaced easily without any damage to the basic cassette unit.

AHMM was interested in applying a non-toxic clear white board paint to the plywood, 'which meant you could write (and remove) directly on to the plywood surface without the need for another layer of finished board’, explains Davies. ‘However, Google was concerned that we would then need to demarcate quite carefully where writable walls existed, otherwise an assumption might be made that all walls could be written on...’

The architects have also been looking at wrapping Jack with a ‘jacket’ that could provide myriad finishes, from metal to vinyl to fabric, each inherently changing the look and feel of Jack within the office space, but without damaging or redesigning the core cassette units.