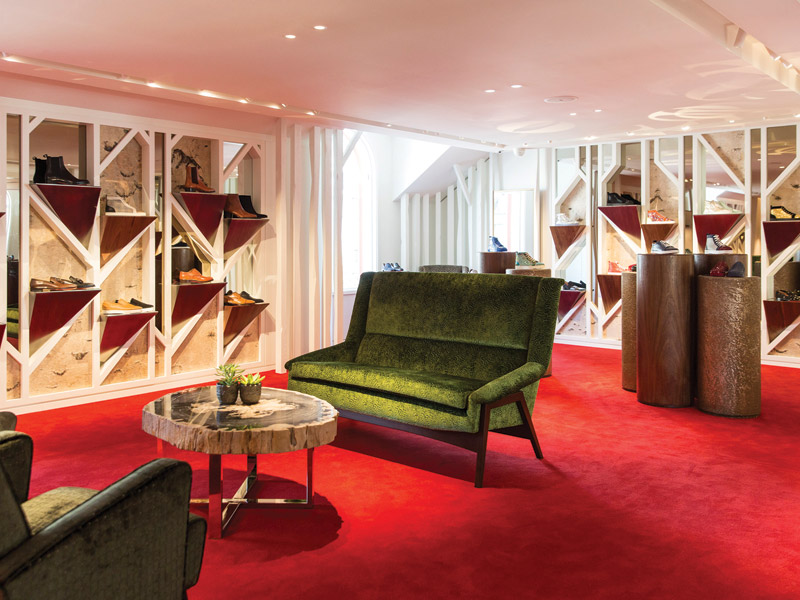 The French fashion designer is best-known for his footwear boasting shiny, red-lacquered soles. London design agency Household has designed more than 30 Christian Louboutin boutiques in the UK, Ireland, France, Russia, Japan, the USA and Canada, specifying finishes such as painted feathers and delicate wallpaper made from shavings of mother-of-pearl. ‘One of Christian’s big inspirations and passions is nature,’ explains Household’s experience strategy director Michelle Du-Prât, ‘so we have used surface materials in different ways to project this part of the brand’s DNA and to elevate different collections.’ In Yorkville, Toronto, the firm used Mundy Veneer’s wall panels in real birch bark in the menswear areas as a backdrop to the shoes. The panels comprise a thin layer of bark glued on to a 12mm MDF board and then lacquered. The process ‘even preserves some of the moss grown on the surface’, says Du- Prât. Meanwhile, semiprecious stones – red travertine, white quartz and blue with amazonite – feature in the concession at Bon Marché, Paris. And in London’s Harrods, Stoneleaf – a veneer of real stone – was sourced from French supplier Stoneleaf. ‘It’s clever that you get all the feel and drama of real stone but without the weight, so we have been able to apply it to counter facades such as the cash desk,’ Du-Prât adds. ‘There are some quite jazzy finishes, in particular Saint Tropez, which has been a hit with Christian.’