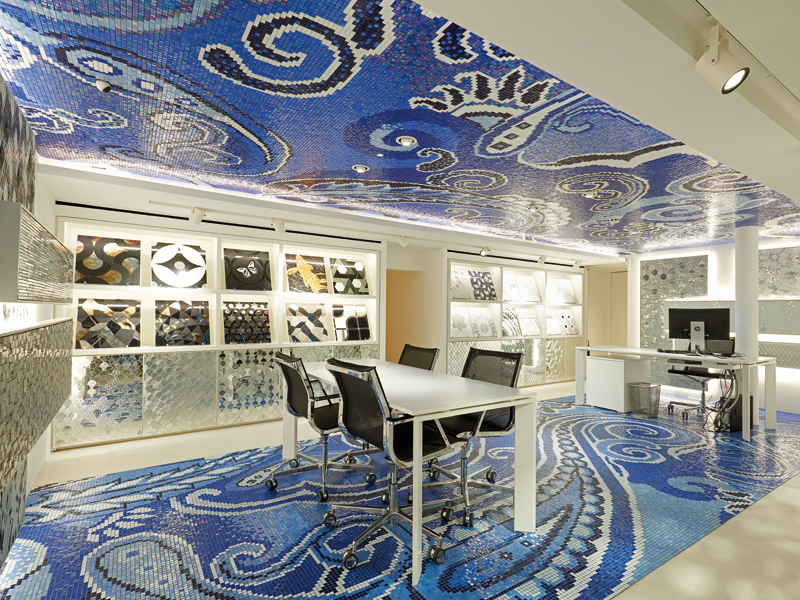 Six selected schemes show the standout effect flooring can produce in a variety of settings, from an Italian mosiac showroom to a paint shop.

Rather than a modest single-storey showroom, the Italian firm has taken a four-floor, 511 sq m townhouse in Dover Street, Mayfair. SICIS's in-house design team has converted it into a showroom and apartment, where its wares and tiling are on display.

The ancient technique of micro mosaic covers the walls and ceilings as well as the floors. 'The floors reflect the eclectic style of the company,' says Maurizio Leo Placuzzi, president of SICIS, founded in Ravenna in 1987. 'The lower level, with a mosaic pixel pattern, reproduces the aquatic world of spas, hamams and swimming pools, evoking in the viewer memories of exotic destinations.'

Against this backdrop SICIS's extravagant artworks, furniture pieces, watches and jewellery, along with its first collection of mosaic-inspired fabrics -- being launched in the London store -- are on display.

Previously, the space had a ceramic floor. 'We had no issue with installing our mosaic and marbles, it is our expertise,' says Placuzzi.

Recent and bigger projects for SICIS include major hotels including the Burj Al Arab in Dubai, and Wynn Casinos in Las Vegas and Macau.

Artisanal Wool and silk rug-making company Ceadogán was set up 25 years ago by Denis Kenny in the Irish county of Wexford, with the company operating out of a stonewalled farmyard dating back to Cromwellian times. Vibrantly coloured rugs to designs by Maree Hensey for Ceadogán Rugs sit in the hospitality area of the Croke Park football stadium, Dublin

Each piece is handmade using a tufting gun, which blows the wool through a piece of polyester stretched over a vertical wooden frame. 'This method is suited to contemporary modern design; it's like using the gun to draw shapes on a huge canvas,' says Ceadogán's creative director Fiona Gilboy. As well as turning a client's own design into a rug, Kenny and his team collaborate with artists and designers on patterns, creating bespoke pieces for embassies, hotels and big corporate spaces. Vibrantly coloured rugs to designs by Maree Hensey for Ceadogán Rugs sit in the hospitality area of the Croke Park football stadium, Dublin

As well as giving a room a visual point of interest, the rugs bring acoustic benefits, particularly in large contemporary spaces of glass, steel and floor tiling.

Interface is continuing its sustainability drive with the launch of a range referencing woollen textiles. From the World Woven collection

The World Woven collection taps into current trends for uncomplicated, hand-crafted and imperfect products rather than factory-made uniformity. Interface, which is based in Atlanta, Georgia, has created the range with 100 per cent recycled content nylon.

Interface's designer, David Oakey of David Oakey Designs, drew his ideas from Scottish tweeds and other bespoke woven textiles found in the UK and beyond, including Saori, a freeform hand-weaving technique that originates from Japan. 'The beauty of hand weaving is that it's closer to nature than the synthetic uniformity of "modern" machined production," says Oakey. 'In a traditional Scottish tweed, for example, what looks like solid green actually has at least 10 to 15 colours, which is similar to the way nature works with colour.' Oakey has combined these themes with biophilic design or biomimicry, which uses nature as inspiration to create human-friendly environments. The belief is that by mimicking natural features within the built environment, users' quality of life is improved.

'World Woven itself does not create spaces with an outdoorsy aesthetic,' explains Oakey, 'rather, designers may be attracted to the collection for its residential feel, or its mix-and-match capability.' World Woven includes patterns such as Collings Cottage and Scottish Sett, which revive houndstooth and plaid, and the Fifties'-inspired Mod Café. Colour makes People Happy is an inspiring paint shop in the south London neighbourhood of East Dulwich. It was set up by Simon March, who sources industrial strength paint from the Netherlands and makes up the colours himself.

The shop, which used to bear few of the trappings of a conventional retail outlet, has been through a refurbishment. 'I realised that people are quite conventional and like a counter,' says March. As well as the introduction of a counter, the shop now boasts a handwritten price list. 'I think people like something nostalgic or familiar at the moment, as the way we shop has changed so much.' Because of e-commerce, 'people's reaction is to want a "proper shop"', he adds. 'Paradoxically, the novelty in shops is their familiarity.'

A key ingredient for the new look is the freshly painted floorboards. March chose a dark green called Bruegel. 'I thought it had the feeling of being "established",' he says. Painting a floor is the best way to unify a room's whole look 'and blend slightly mixed and varied textures together to look complete rather than a patchwork', says March. It is also hygienic as it creates a waterproof, impermeable finish, and commercially company colours can be used to brand a space. However, March cautions that by painting a floor 'you are obscuring the material's integrity by covering it up'.

Colour Makes People Happy's paints come from a company called Schaepman in the Dutch town of Kampen. 'Holland has a long history of paint making. In the same way you go to Germany to buy a car, you can go to Holland to buy paint,' says March. The Gold certification is the culmination of seven years of hard work and effort, inspired by the goal of transitioning to the circular economy, based on C2C principles. 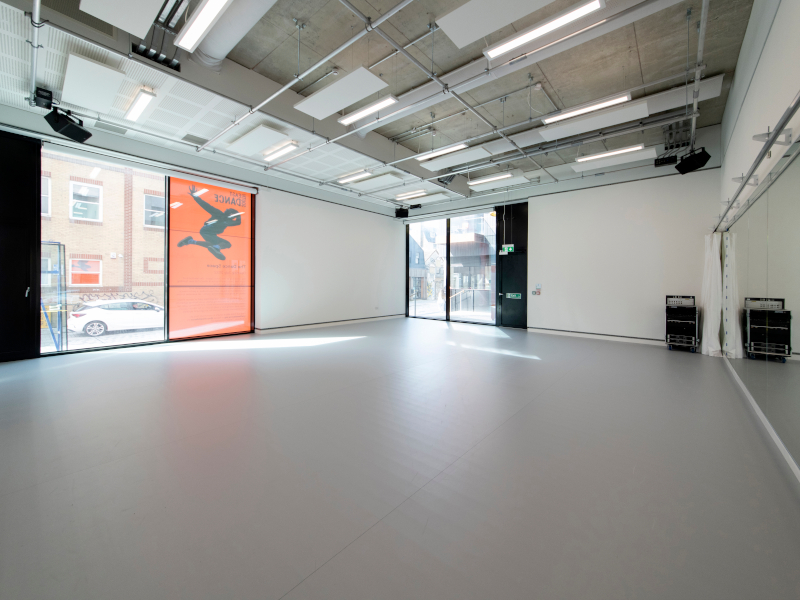