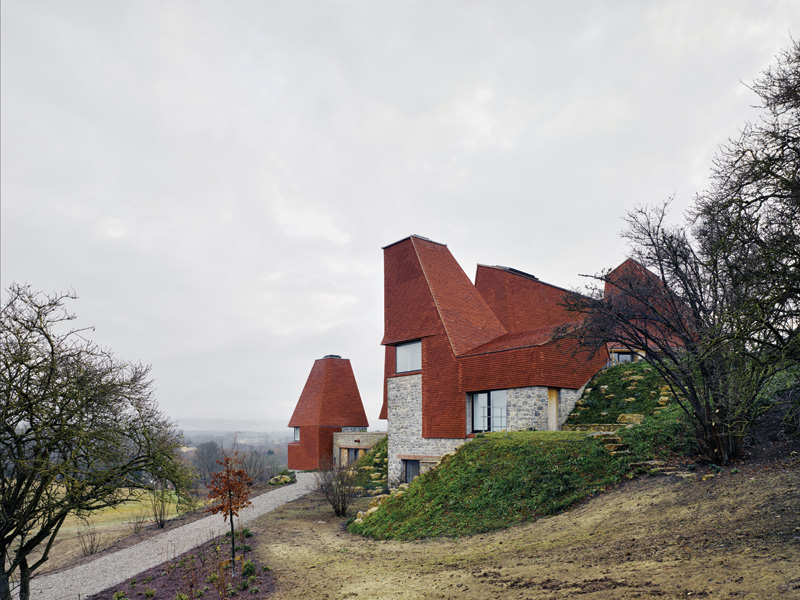 This modern take on an oasthouse complex was no easy task, providing accommodation for four families, walls big enough to house a private art collection and space to host classical music concerts. And the clients were the inlaws...

At around 1,450 sq m Caring Wood House is a substantial property. It sleeps at least 15, has a large entertaining space and sits in its own 84 acres of Kent countryside.

But at this point, the similarities with many other English country houses start to fall away. This 21st-century take on an oast-house complex is no flashy gesture à la derivative McMansion or footballer’s pile, but an original family home on a human scale. That architects James Macdonald Wright and Niall Maxwell have pulled this off is due in part to the former’s relationship to the clients. Macdonald Wright, who runs Hackney-based Macdonald Wright Architects, is the son-in-law of the owners. The couple commissioned him to design a house that could accommodate the 15-strong extended family — their three daughters plus their partners and children — for weekends and holidays. For 10 years, they had all been holidaying together in big rented houses, and Caring Wood House would be a permanent base.

Rather than scaling up his own five-strong practice, Macdonald Wright teamed up with Rural Office for Architecture, based in London and Carmarthenshire in Wales. Its principal Niall Maxwell and Macdonald Wright met while studying at The Bartlett and worked together at Ellis Williams Architects on Gateshead’s Baltic Gallery (2002). Wright’s commission started with finding a plot within 90 minutes’ drive of London. After a six-month hunt, the client bought a swathe of farmland near the unglamorous town of Maidstone and within sight of the M20. One of the site’s attractions was that consent had previously been obtained, although that had been for a house on top of a hill. Macdonald Wright spent several nights camping on different parts of the estate to work out where best to place his property, which achieved planning consent under PPS7. ‘I felt it was important to push the house over the edge of the slope,’ he says, admitting that its 30-degree gradient posed ‘a challenge for the scaffolders’. And that contributes to Caring Wood House’s relative sense of modesty. It doesn’t dominate the landscape, and when the 27,000 newly planted trees grow, the house will be even more unobtrusive. To help with the orientation of the roughly square main structure and its three geometric wings, Macdonald Wright set out the plan of the house with pegs and ropes and took compass bearings to identify window locations. A wide timber staircase leads up to the communal living space

Also in the brief was the need for a space big enough to host up to 100 people for classical concerts, and to hang the owners’ large art collection. And this informed the layout.

The house is entered via a surprisingly low-key, steelframed front door dressed in timber, which opens on to a large boot room with coir flooring. Hardly your usual introduction to a country seat. This room gives on to a 280 sq m entertaining floor, whose white walls and relatively few apertures give it a gallery feeling. The family’s 850 sq m or so communal living space — including kitchen, dining area and sitting rooms — is reached by going down a timber staircase. Each of the daughters and family have their own ‘wing’ in their oast house-style turret, all accessed off of the communal space

The ceiling is roof-height because ‘I wanted a connection with the gallery space and sculptural shape of the roof — you can see the space in reverse,’ says MacDonald Wright.

The communal living space takes up three sides of a central core that fulfils another part of the brief. The owner wanted somewhere to sit and think. The solution was an open-air inner courtyard with a shallow square pool in its centre.

Each family’s individual quarters are accessed via the living space. But while the owners’ private accommodation is on one level, the three daughters and their families each have a ‘wing’ housed in their own oast house-style turret. The architects have allocated just 90 sq m to each family, equating to a three-bedroom flat. For their version of the English country house, Macdonald Wright and Maxwell drew inspiration from Charles Voysey and Edwin Lutyens, particularly the latter’s 1900 Goddards property in Surrey. Macdonald Wright’s interest in Lutyens started when he did the drawings for the 1996 book on Goddards for Phaidon’s Architecture in Detail series.

As well as responding to the landscape, the architects determined to make the house as low-energy as possible, hence the ground-source heat pump, the 240 sq m PV installation on land near the house, and the locally sourced materials and detailing, some of which were inspired by Stoneacre, a National Trust medieval yeoman’s house half a mile away.

The ragstone that faces some exterior walls, the 146,000 handmade peg tiles, and the indoor terracotta floor tiles were all sourced locally, helping the house to achieve a Code for Sustainable Homes Level 6, and an EPC rating of A. Macdonald Wright points out that though the build — including a barn and caretaker’s cottage — is complete, a bigger project is just starting: ‘How the house is furnished and occupied, and how the landscape is developed’.

In the meantime, he will turn his attention to Macdonald Wright Architects’ usual-sized commissions: next up, a two-bedroom house in Hackney.