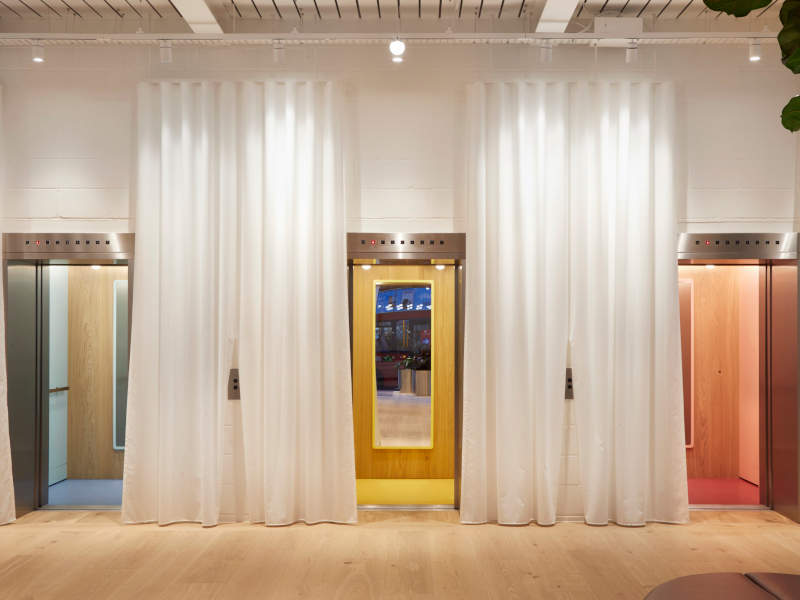 The building had a ‘watered-down postmodern city look’, describes Oliver Bayliss, director at BGY and project lead. On first glance, he explains, many would think to replace the dated facade: ‘there’s a sort of natural reaction, “Oh, we’ve got to reclad it, or knock it down and start again,” and actually we just felt you don’t need to do any of that. Yes there are some quirks... but we felt we could always use those to our advantage, instead of spending loads of money going down what is quite an exhaustive and not particularly sustainable path – recladding, ripping off all the pieces and taking it out.’ 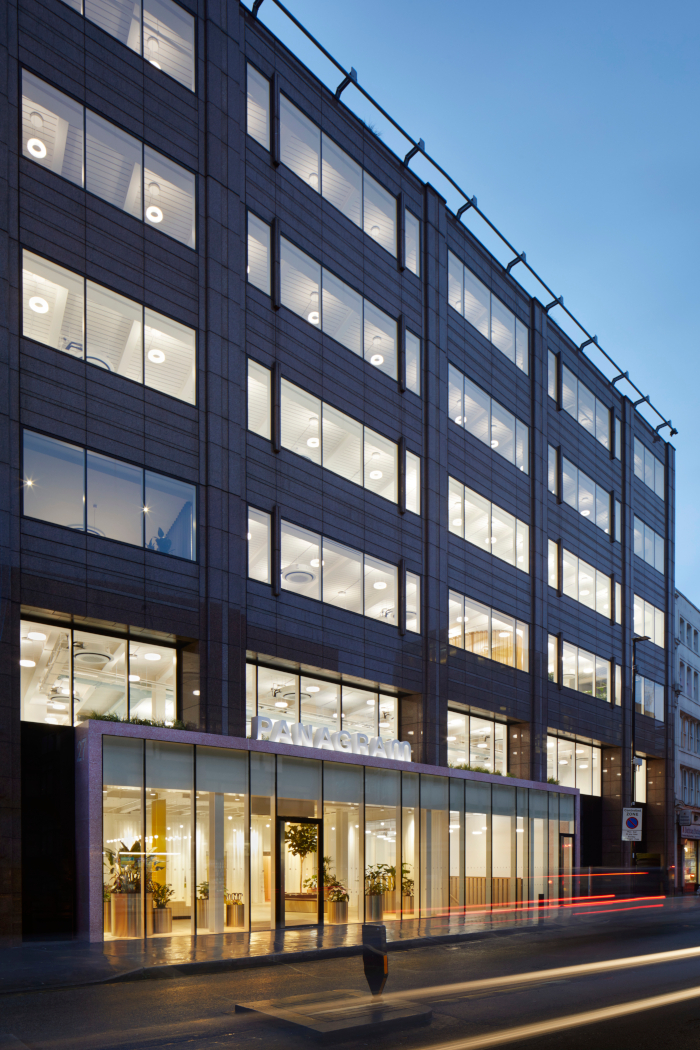 ‘PANAGRAM’, firmly and proudly across the facade

BGY often approaches a building in this way, looking to find one aspect to turn it around rather than starting again. The ground floor is an apt place for such an intervention, Bayliss suggests, ‘Because, actually, people don’t tend to walk around looking up.’

Feeling the street frontage provoked little engagement, BGY pushed out the entrance slightly to create an entrance ‘portal’ in a vibrant, but complementary, terrazzo to the building’s pink granite, twisting the corporate aesthetic into something more playful. Above the entrance in a white terrazzo is the building’s name, Panagram, while the sides of the portal have the number 27, the office’s Goswell Road address.

The building asserts right from the off that it’s not just your typical office. In fact, it makes you wonder if it is an office at all; looking in from the street at a large 1,560ft2 open space, through the fully-glazed ground floor, it lacks the usual landmark of a reception desk. The possibility that it could be mistaken for something else – a gallery perhaps – is an ambiguity that BGY actively sought. The receptionist, untethered from a desk, instead emerges from behind a curtain to greet those coming in – acting as a kind of maître d’, with the aim of providing a more ‘elevated’ hospitality-style service, Bayliss explains.

In place of a desk, there is a curved island of leather seating around a small tree, a series of stainless steel drum planters to one side, and a large horizontal plinth, with distinctive curved tiles from dutch company DTile. In a twist on an office aquarium, the plinth contains a fish pond – complete with a mini garden gnome, casting its fishing line into the water.

Translucent white floor-to-ceiling curtains border the space, with a back-of-house area for the receptionist on one side, and on the other, the entrance to a two-storey office space that is split across ground and basement levels. BGY has cut from the slab to bring natural light to the lower floor, with the two levels connected by a wooden feature stair that doubles as seating. A large ficus tree tucked into the staircase traverses the two floors to be seen from the street.

Across the building, services such as the air conditioning, heating and cooling needed to be replaced, and an air source heat pump installed. BGY removed the suspended ceilings and cleaned up the soffits before painting ductwork to introduce splashes of colour – using Parisian Pink and Duck Egg Blue on alternating floors.

New additions include bike storage, showers and changing rooms. There were existing but unused terraces across the building; BGY has opened up the facades so they can be used. 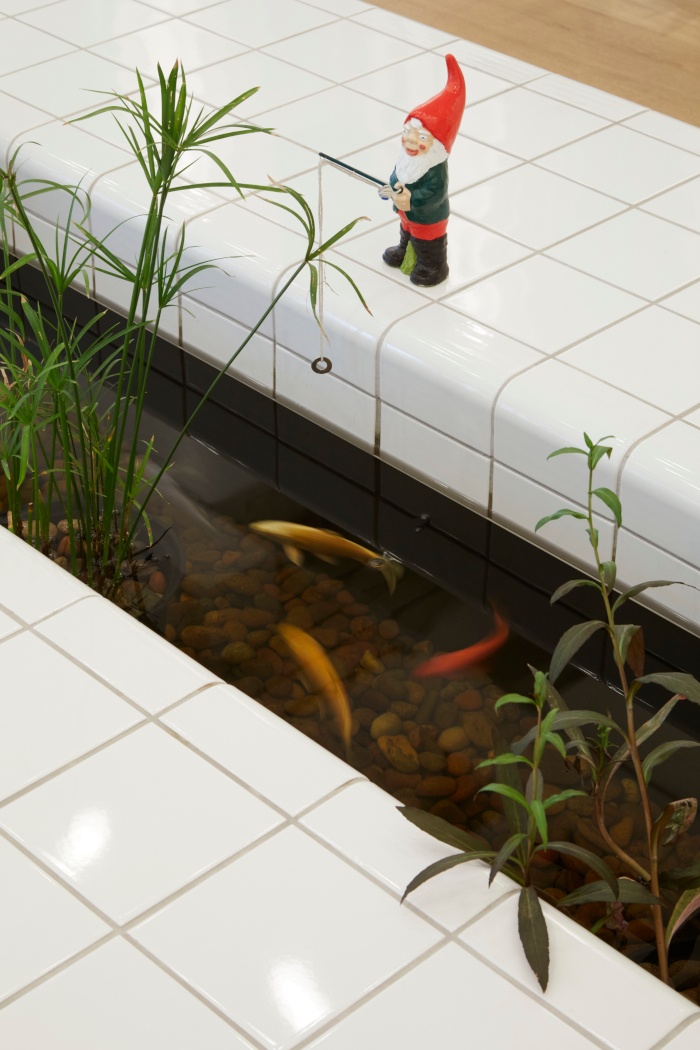 A garden gnome, fishing over the pond – a playful detail of an unusual office building

While the majority of the floors are left as Cat A, one floor has been fitted out fully by BGY. Inspired by the postmodern heritage of the building, the palette is pastel colours and terrazzo surfaces. Mixed with these are natural wood finishes and geometric furniture, while translucent curtains and colour blocking help to create a range of spaces.

BGY decided to keep the lift core in the centre of the floor plate. This divides the open space, but in doing so provides a useful front- of-house/back-of-house duality to each level. The rear is well-suited to more relaxing spaces, including the kitchen area – on the Cat B floor there are larger tables, seating and booths to the back, while there are desks to the front. 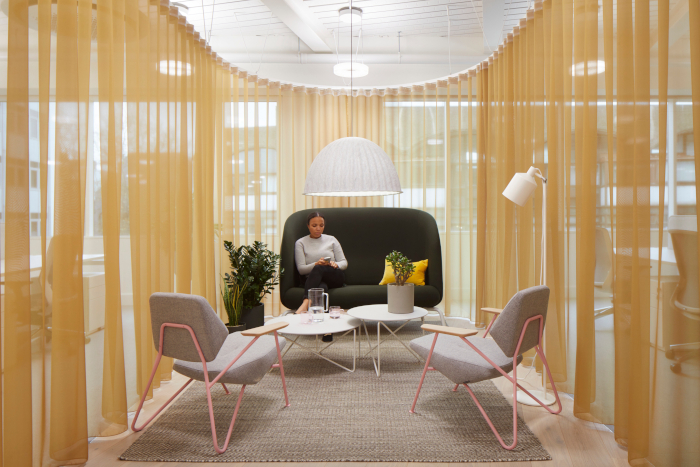 Meeting rooms are both more and less formal

Dorrington invited BGY to pitch for the job – albeit through a competition the architects didn’t at first know they were in, explains Bayliss. The branding is by Everything In Between, an agency that BGY has worked with before on projects such as the Wenlock Works (completed 2020), Dept W (completed 2019) and The Verse Building (completed 2019) – but which was appointed here separately through another competition.

The approach taken throughout the project targets a changing idea of what an office should be, Bayliss explains. An office design and its branding, he says, now needs to create an identity that represents a culture and values that prospective employees can identify with and latch on to. ‘I think that that’s something which has been the biggest sea change over employment culture over the past 10–15 years,’ Bayliss continues. ‘Once upon a time it was about working for this company... [Now it’s] “I can see myself working in that building.” Companies are really mindful of... the brand that they evoke, and the sort of philosophy that they have, [which is] very much manifest in the buildings that they occupy. I think we get that.’

Bayliss also comments that the project is a playful departure from some of BGY’s other workplace projects, and that the team are really happy with the results. Completed during the pandemic, the building is not yet fully let, but already a large percentage of the space has been taken up by human rights-focused solicitors Leigh Day. BGY is looking forward to seeing who else Panagram will appeal to, and to see the space bustling with activity.