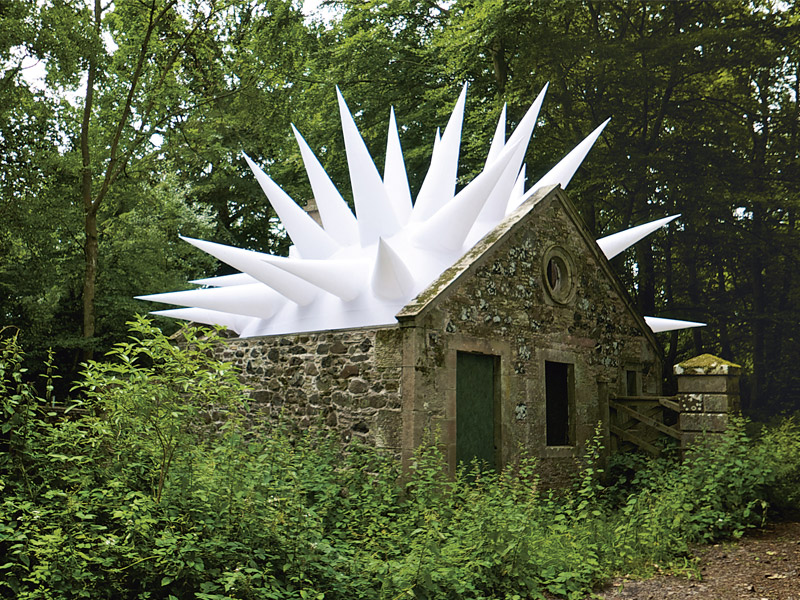 The technology of inflatables may have originally been developed in the mid-18th century for aviation, and then later for warfare, but since the 1960s and the rise of plastic it has been a vital tool for experimental, mobile, playful and affordable design. Phaidon’s new book from Sharon Francis, Bubbletecture, showcases more then 200 inflatable projects spanning the worlds of art, design, fashion and architecture — from Archigram’s Suitaloon (1967) to Marcel Wanders’ Balloon Chair (2014). Some examples of inflatable design revel in the technology’s playful, adaptable qualities with the creation of fun, high-impact forms which subvert their context — think Kurt Perschke’s RedBall Project (2001–ongoing) or Anna Maria Cornelia’s Life Dress (2012). Others, however, show how the technology’s rapid installation and mobile possibilities have been harnessed for innovative emergency response or humanitarian design solutions, such as Solight Design’s portable and floatable SolarPuff lighting (2012), Michael Rakowitz’s paraSITE shelters for the homeless (1998–ongoing) or Arata Isozaki and Anish Kapoor’s Ark Nova (2013), a mobile concert hall for earthquake-stricken residents in Japan. In architecture specifically, inflatables have often been used as propositional forms and shorthand for a kind of social and technological utopianism. In 1956, prefiguring the inflatable architecture movement, Frank Lloyd Wright developed designs for an inflatable village of affordable homes, the Fiberthin Air Houses. In the following decade, Coop Himmelb(l)au designed the pneumatic living unit Villa Rosa (1968), which suggested an entirely adaptable home of the future. Like much other creative expression in the 1960s, inflatable architecture’s playfulness and flexibility deliberately challenged the prevailing solemn, monumental modernism of the previous decades. Phaidon’s book comes at a critical moment: one in which the possibilities for inflatables technology are taking us to innovations we once only dreamt of (such as Foster + Partners’ NASA-funded design proposals for housing on Mars), but also one in which the material that propelled such technology into popularity — cheap, mass-produced plastic — is being examined for its destructive environmental impact. More sustainable developments of the material hold better promise, however, such as the rise of ETFE panels — deployed powerfully in Grimshaw Architects’ Eden Project (1998) as well as the upcoming Diller Scofidio + Renfro project The Shed in New York. Whatever the future of ‘bubbletecture’, it already has a fascinating history and trajectory.