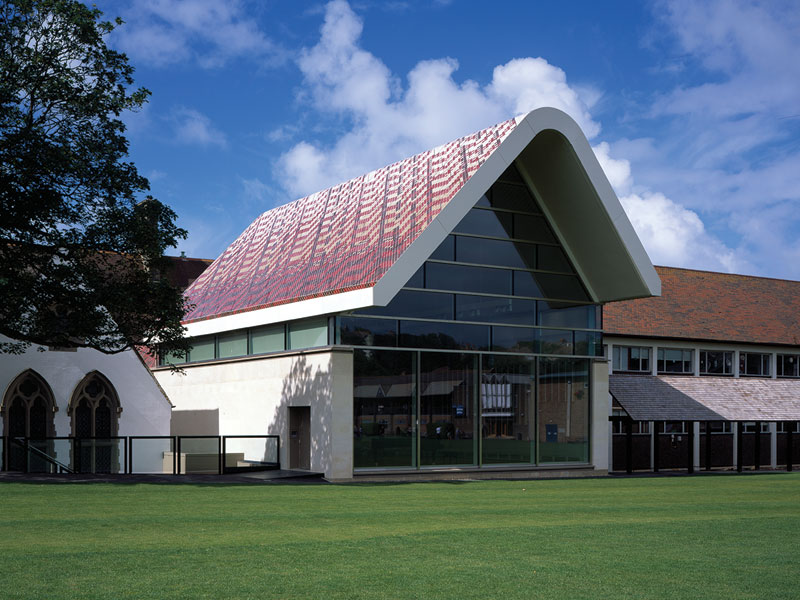 Another new edifice, in a raft of new buildings for the 170-year-old Brighton College, has been unveiled - the music school by Eric Parry Architects, with a floating, pitched roof inspired by George Gilbert Scott’s original school building. Cate St Hill visits

A stone’s throw from Brighton Pier and neighbouring Kemptown, a chunk of the city is dedicated to Brighton College, an historic school campus comprising an imposing George Gilbert Scott building and various newer, ad-hoc, additions arranged in a traditional collegiate quadrangle. The latest building in its 170-year history is a new music school by London-based Eric Parry Architects. It is the first phase in creating a dedicated performing arts’ hub and drama school that will replace an existing science block and open up the route through the previously disjointed campus, connecting the central quad to the vast, open playing field behind.

Inspired by Gilbert Scott’s flint gable on the main school building, Eric Parry Architects’ limestone-clad music school takes the form of a rectangular plan, with a ‘floating’ pitched roof ‘hovering’ above a grand, lofty, recital hall. The roof’s composite steel and timber structure is finished with a pattern of red, glazed ceramic tiles that pick up on the russet-coloured roofs of the older buildings.

‘I wanted to explore polychromy,’ says Eric Parry. ‘What I wanted was a very simple interior that was just about light, then the asymmetrical roof to do something that was responsive to the earth and sky. We worked on an interlocking weave — it’s almost like a textile design that runs across the roof.’ The music school is entered from a new courtyard that backs on to the Gilbert Scott building. A lower-ground level is dedicated to a series of acoustically isolated teaching and practice rooms, underneath which is another floor comprising storage and plant room with a ground-source heat exchange system that will serve not only the music school but other planned new buildings. ‘It’s [the building] sunk into the ground and is almost like an iceberg, you don’t see all the complexity,’ he says.

A sinuous staircase wrapped in bright-red steel leads to a percussion room and the centrepiece of the building: the 190-seat Sarah Abraham recital hall. It’s full-height, north-facing glazed wall overlooks the playing fields, offering a green vista that almost makes you forget about the density of the city around you. Cream leather bleacher seats extend into the cathedral-like space while acoustic panels hidden in the walls open like gills to adjust the reverberation time, whether it’s for a solo artist or a whole orchestra.

‘The thing that has always struck me about music spaces is that actually there is no real need to separate them from the environment. The playing field is a beautiful environment to engage with,’ muses Parry. ‘It’s incredibly peaceful; whether it’s in practice mode or recital mode, you’re concentrating and listening but at the same time you’re seeing birds pass and the weather change, and that’s really special.’ The staircase is wrapped in red steel. Photography by Hélène Binet

Eric Parry’s music school, and subsequent drama school (expected to complete in 2020) are not the only new additions to Brighton College — an ambitious 10-year redevelopment programme has already seen a boarding house (2013) and a building with staff facilities and common rooms (2012) by Allies and Morrison, while Hopkins Architects’ five-storey academic building, with 22 new classrooms, is on site and due to complete next summer.

OMA has also designed the new Centre for Sports and Science, a bold, dark-grey affair that will house a swimming pool, double-height sports hall and 18 state-of-the-art, university-standard science labs (due to start on site in 2017). It’s a strategy that seems to be paying off well; in just 10 years, Brighton College has already leapfrogged from 147th to 6th place in The Sunday Times rankings. Now that’s impressive.