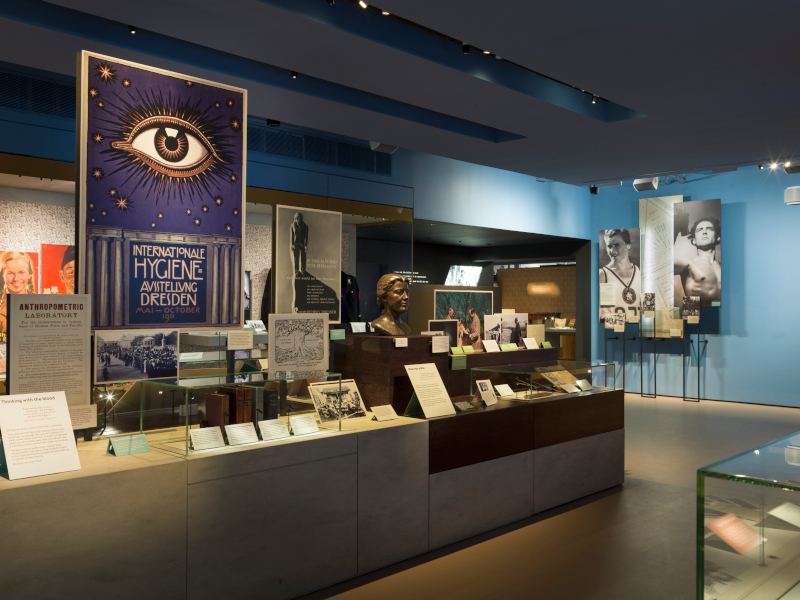 WHEN THE United States Holocaust Memorial Museum opened in Washington, DC in April 1993, it set the look and tone for almost all the Holocaust galleries and exhibitions that followed: a gloomy, stripped back, industrial aesthetic majoring on concrete and dark or rusted metal, culminating in that most iconic of incriminating images – the stacked pile of shoes, discarded at the German death camps in occupied Poland.

In late 2021, the Imperial War Museum (IWM) opened its new Holocaust exhibition, which takes a very different tone and design aesthetic from its predecessors. ‘The way Holocaust museums have presented the story in the past is as if it happened in the dark,’ says Roger Mann, director of Casson Mann, who has designed the new exhibition. ‘We propose that people knew what was happening but turned a blind eye. We have turned the emphasis away from memorial to… looking at how evil happened under peoples’ noses.’ 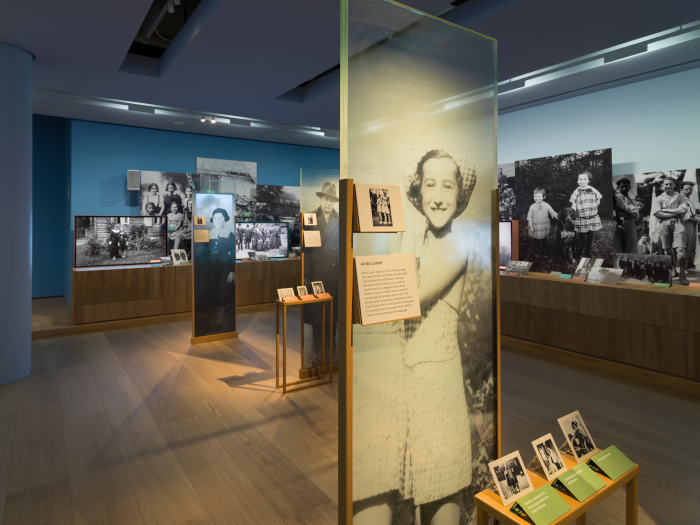 At the start of the exhibition, a room of ‘Jewish Life’ shows the lives of a multitude of Jewish people, before the term Nazi had ever been heard. Image Credit: ANDREW TUNNARD

The rise of extremism, a society increasingly fragmented, a desire to blame the economic or social troubles of today on specific groups identified by race, nationality, political allegiance or gender – all inflated by carefully targeted propaganda – that was the context for the rise of the Nazis. It doesn’t sound too different from the prevailing global mood today, does it? And this is the point that Casson Mann, together with IWM curator James Bulgin, are hoping to make.

That emphasis on bringing to light how the biggest crime of the 20th century was able to happen has underpinned several key decisions. One is to colour most of the gallery walls in shades of light, sky blue – darkening to a midnight blue in the most sombre rooms. Says Mann: ‘The reference point is broad daylight. We’re trying to get across a sense of being outdoors, being out in the world, to fool your eyes somehow.’ A bold move but it works well.

Another emphasis is on history as part of a continuous present and, to this end, the IWM team went to the historic death camps and concentration camps to film these now largely plant-filled, peaceful but haunted places. The films, shown on large screens at critical points, offer valuable moments for reflection. There is no need to over-dramatise or inflate the horrors of that time; they speak for themselves.

One of the most effective and unusual rooms is right at the start – a room of ‘Jewish Life’. Here, Casson Mann presents a multitude of happy, thriving people within their own communities, with every nation afflicted by the Holocaust represented. Many of the photographs are inflated to show people large scale, faces at eye level; some individuals are represented life-size on slim glass panels, their names and stories printed beside their photographs. Every single one of these images has been sourced specifically from a time ‘before anyone had heard the term Nazi or seen a Swastika,’ says Bulgin. Most of them have never been shown before, and many of the Polish ones come from three caches of documents, films and photographs gathered and then hidden by Jewish archivists in the Warsaw ghetto as the Nazi campaign gained momentum. On the room’s multiple A/V screens, says Mann: ‘We’ve put up a vast archive of home movies and photos, playing and changing constantly – about 1,200 images. There’s a sense that if you visited this gallery three times you wouldn’t see the same images.’

Here the exhibition’s prevailing soundscape – a powerful and evocative addition to the design – filters through to us the sound of laughter, music, chatter. It emphasises that these were vibrant communities with no clue as to what atrocities lurked around the corner. Says Bulgin: ‘One of the things we try to avoid is inevitability, remove any sense that this was predetermined. That’s always what happens when you walk into darkened places – you feel people are already condemned.’

The next room explores the wider political climate around Europe, with posters and statements expressing the slogans of both right wing and left wing political groups, showing how an atmosphere of violence was fomented. And here we are introduced to ‘the perpetrators’. This presentation is a masterstroke: Hitler and his chums are lurking in a corner, life-sized, but using photographs from before the rise of Nazism. So Hitler is dressed as an oversized boy scout in hiking shorts. Goebbels wears what looks like a flasher’s mac. Here, as everywhere, says Mann, ‘we avoided the Nazi PR images’.

We then move into an area exploring the final months of peace, but also the escalating fear and panic causing people to flee their homes as refugees. Poignant stories – especially around the Kinder Transport – are told with letters, objects and personal memorabilia. Here, as with elsewhere, every photograph has been carefully researched, selected and presented to offer a very particular viewpoint – the viewpoint of those afflicted, not their persecutors. 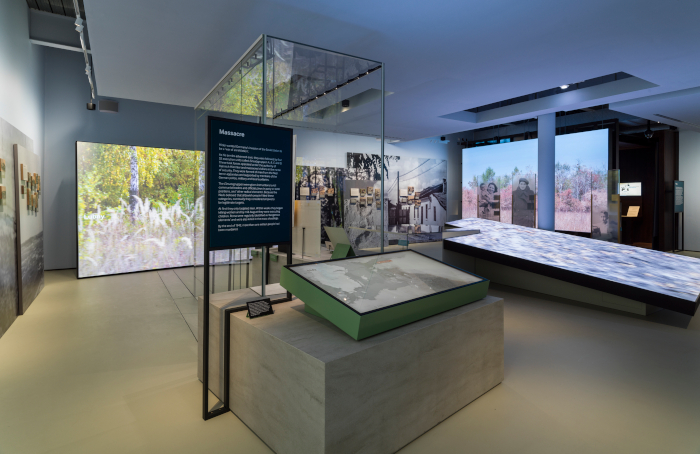 Every photograph used portrays a particular viewpoint of those afflicted, such as shots looking outwards rather than in. Image Credit: ANDREW TUNNARD

This prevails even in subsequent rooms depicting pogroms, ghetto conditions, antisemitic assaults and eventual incarceration. Says Bulgin: ‘The few shots we have from Auschwitz are all from the prisoner’s ramp looking outwards, never from the outside of the fence looking inwards.’ However, as we progress towards the most traumatic aspects of the story, the documentary photos reduce in scale. Says Mann: ‘We show them at the scale at which they would originally have been printed. It means you have a choice – you can go and examine the photo, read the caption, or you can skim past it according to how robust you are feeling.’ In this gallery are more of the large screen presentations of the present day death camps. That careful choreography by which we are brought up close to small scale but shocking, documentary evidence, offset with larger moments of seeming respite – knowing that the stories behind these images is anything but soothing – is both affecting and effective.

The one major physical artefact is put to good use: a train carriage that delivered people to the death camps (or in fact half of it, the other half is in Israel). The carriage stands unanimated, unadorned, as silent witness. The soundscape here drops to a low, bass roar.

The eventual liberation is depicted not as something triumphant. Says Bulgin: ‘A lot of survivors said after liberation they just felt empty’. Evidence of the Nuremberg trials is presented, but in such a way as to make it clear how few were ultimately brought to trial.

The exhibition concludes with a peaceful room, offering comfortable, upholstered seating for people to listen to as much as they wish of about 30 hours of survivor testimonials the IWM collected in the 1990s. Unedited, they play out, alongside a three-hour long video that summarises the fates of everyone seen and met on your journey through the exhibition.

The overwhelming impression is of the multitude of ordinary human lives interrupted by the brutal mindset of a handful, relying on the actions and interpretations of the callous or careless majority. It’s sobering stuff. And the design and curatorial team should be congratulated for having set a new standard of Holocaust exhibition for the 21st century.