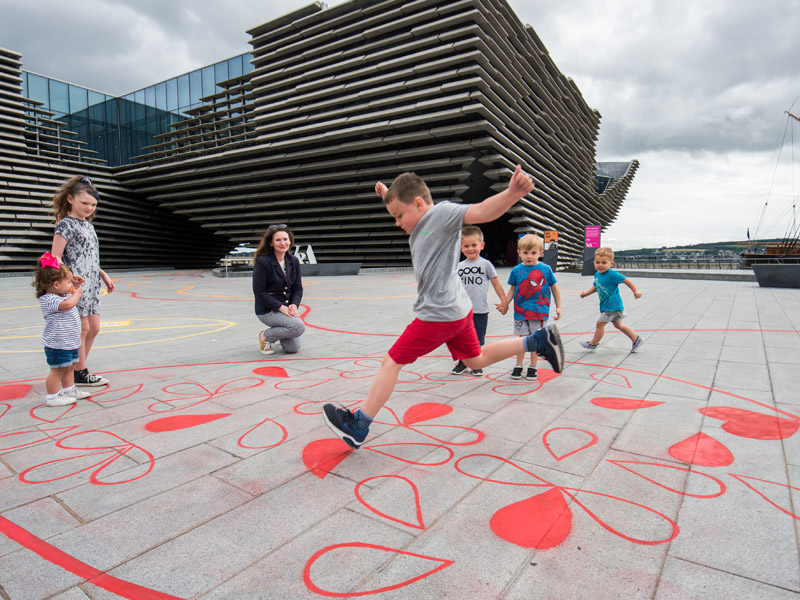 It’s funny how some places get under your skin, and not others. Having been blessed with more than most people’s opportunities to see the world, professionally and recreationally, I have to say Dundee is definitely somewhere that has found a place in my heart. In the three years prior to the arrival of the V&A Dundee in 2018, over three fascinating visits I witnessed the skill, style and passion with which this city articulated and celebrated its historic and current creative culture and character. Many have tried and failed to galvanise meaningful cultural regeneration around a major architectural event. But I felt that the collaborative way in which multiple Dundee organisations, civic, academic and commercial, worked together to support this new cultural entity and weave its benefits into the fabric of city life boded particularly well.

So – given the impact that lockdown has had on so many arts and cultural institutions – it was with some trepidation that I popped into Dundee during a trip to Scotland at the summer’s end. I was very much hoping that with the interest and momentum that saw Kengo Kuma’s craggy cliff face of a building attract its one millionth visitor in February, this new and ambitious project would not have been stopped in its tracks.

I needn’t have worried. The V&A Dundee, which reopened on 27 August, revealed a wealth of new engagement and innovation potential on every floor and also around the building’s perimeter. First, there was a welcome reprogramming of the vast entrance lobby, which came in for some criticism at the building’s opening. Its generous proportions were being put to good use, giving visitors and staff plenty of space as they navigated their way through the timed ticket experience. And the central area – where a cafe once sat – had been transformed into a free exhibition space, featuring a fascinating exploration of the role that design has played in helping to deal with the coronavirus pandemic. A message from Christopher and Tammy Kane, the siblings behind the Christopher Kane fashion brand

Now Accepting Contactless: Design in a Global Pandemic looked at everything from the graphics, data charts, animations and medical illustrations that helped to communicate the complexities of the coronavirus threat to the communities that have helped to create hospital scrubs to meet the unprecedented demand. Scrub Hub was an inspiring grassroots movement, applicable to anyone with sewing skills, which provided them with downloadable patterns for NHS uniforms. Dundee’s Scrub Hub – located at the University of Dundee’s Duncan of Jordanstone College of Art & Design (DJCAD) – brought students and volunteers together to fill bags with kits of pre-cut fabric and patterns, which were then distributed to 600 sewing volunteers in the community. Over 1,000 sets of scrubs were made with the unique Tayside Teal fabric from local fabric manufacturer Halley Stevensons.

The most visually impactful part of the exhibition is visible both from the outside and as you ascend the curving staircase to the first floor: Christopher and Tammy Kane’s message for these times, in huge script. Be Open to the Joy You Deserve is a statement of hope and good karma, say the siblings behind the Christopher Kane brand, who grew up on an estate, near Glasgow: ‘As designers we know that the things we surround ourselves with have a significant impact on our lives.’ It was originally part of Dazed Media’s #AloneTogether campaign, launched in April 2020 to support Barts Charity, which raises money for the NHS.

But perhaps the most groundbreaking aspect of the exhibition is a 3D-printed door handle, invented by Belgian studio Materialise, which can be opened with an arm rather than a hand to help against the spread of the coronavirus. It features not just in the exhibition but also throughout the building, with the handles installed on all the doors.

On the first floor I toured the newly opened Mary Quant exhibition, in a glorious, eye-poppingly mid-century modern catwalk presentation that used every inch of its vast, hanger-like space, compared to the cramped confines of V&A London where it debuted last year. The visionary designer vowed that the aesthetic and sensual joys of high fashion should be available and affordable to all women, and pioneered new methods of branding (her daisy logo), boutique design and customer service, as well as turning herself – and her hairdresser Vidal Sassoon – into 1960s’ legends, with that distinctive geometric bob. It was clearly doing great business, and helping to spread the Dundee institution’s message that art and design are far from elitist pursuits. Several DJCAD students had created bespoke items in the spirit of Quant, which were displayed in the foyer and worn in the exuberant advertising for the show.

However, the public space around the building itself has perhaps been the surprise hit of Dundee’s lockdown. I noted some funky, colourful chalk drawings that adorned the paved area around the entrance: a new socially distanced game for children, devised by a lecturer at Dundee’s Abertay University, which can be played by downloading an app. If, prior to lockdown, the riverfront area immediately around the museum had not found a role for itself, it has now, thanks to the introduction of pop-up food and drink carts, and the arrival of chairs, benches and a bandstand in the V&A community gardens in the grassy park area nearby. This safe, open-air gardening and gathering space will be expanded over the next few months, with a huge adventure playground being added on the riverfront too. Lockdown, according to my V&A Dundee sources, has changed some of the less enthusiastic locals’ attitudes to the museum; perhaps the fear it might not reopen made folks more appreciative of what they had on their doorstep. Other Dundee cultural leaders agree, among them Annie Marrs of Unesco City of Design Dundee: ‘There has been a shift in audience attitude,’ she says. ‘If some had thought “it’s not for us” during all the opening fanfare, that may no longer seem to be the case.

The closure … may have even given people the courage to claim the public space surrounding it – including young skateboarders, who are making full use of the street furniture (with the V&A’s blessing). Maybe the pause allowed everyone to go: hang on, what’s important here? It’s the ecology of the city as a whole rather than only what’s going on in the building.’

I’ve said it before, and I’ll no doubt say it again: bravo Dundee.