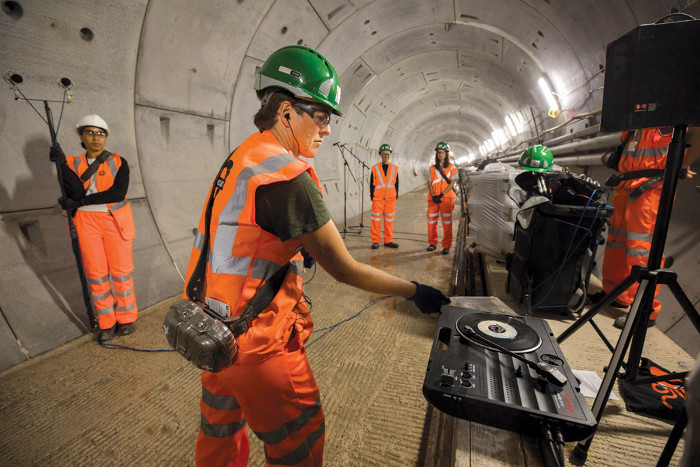 Artist Nina Wakeford speaks about the riches found in unearthing the communities past, present and future around two new London stations

It is undoubtedly one of the perks of the job that we writers are sometimes invited to places that would be entirely off-bounds to us as civilians. Thus I found myself, in August 2019, eight storeys underground, standing between some newly installed train tracks in a brand new section of concrete tunnel, watching – from a safe but thrillingly small distance – London’s Northern Line trains complete their loop at Kennington Underground station in order to head back up north. Wakefield’s cyanotypes will be on display

Wearing the full high-vis health and safety regalia (dayglo orange trousers and vest, helmet and steel toe-capped boots) I was admiring this surreal train-level perspective in the company of Nina Wakeford. She is one of the roster of artists picked for 2019’s Art on the Underground (AoU) programme, Transport for London’s public art initiative to enliven the journeys of its millions of daily commuters. But, unlike most of the AoU artists, Wakeford’s output will not be found in posters, tube map covers, murals, installations or mosaics; she is a sound and performance artist. And as artist in residence since late 2018, she has burrowed deep into TfL’s archives and into the history of the London neighbourhoods where two new stations for the Northern Line extension are being created: Nine Elms and Battersea. Wakeford was a sociologist before the discipline of performance art seized her, so it’s not really surprising that her approach to this commission has been to immerse herself in the communities connected with the story, investigating their perspectives with the kind of compassion, curiosity and eye for detail you would expect from a social scientist. She told me of night walks following around a group of Spanish miners (employed through Spanish firm Ferrovial Agroman, who formed a joint venture with Laing O’Rourke to construct the tunnel) with her tape recorder, and finding out that the gentle songs they crooned as they worked had been taught to them by their grandmothers. She also delved into a different kind of underground community: she unearthed the fascinating history of the LGBTQ employees who worked on the trains and in the stations, through the paranoid Aids-obsessed 1980s, and how they communicated support to each other via secret, coded vocabularies, and gatherings at a Vauxhall pub, The Market Tavern. This iconic pub, built in 1974, when Covent Garden Flower Market was relocated to Vauxhall, was a haven, it seems, both for London’s LGBTQ community and the night workers at the adjacent flower market, who would turn up to toast the end of their shift with a pint at 5am just as the last, weary clubbers were leaving the building. That icon has now been demolished, as has so much of this neighbourhood, to make way for Kieran Timberlake’s new £750m US embassy and the surrounding clusters of vacant apartments, a vista described by The Observer’s Rowan Moore as ‘a Weinstein-orama of ill-planned luxury horndog high rises’. I am not surprised to hear that, when she landed the AoU residency, Wakeford roamed the area, thinking: ‘What kind of artistic intervention is possible when this is all there is?’ However, the communities, past, present and future, provided the key: the 1970s and 1980s market workers and LGBTQ revellers, along with the hundreds of miners, engineers and architects involved in the emerging infrastructure, as well as the future TfL workers who will be here in 2021 when these stations open. She has gathered archive images, memorabilia and reams of conversations – interviews with drivers, former flower market workers, Market Tavern staff, miners and engineers – into a book, called The Pink Depot, whose title celebrates contemporary London’s spirit of inclusivity, where gender diversity is embraced. But for Wakeford, ‘The Pink Depot’ is also the space within and around these tunnels. She has made it so by staging performances here: in the summer of 2019 she took a crew of LGBTQ drivers, plus TfL’s head of tunnelling Mark Thompson (a former miner himself, from Barnsley), plus a former Market Tavern DJ, on a formal, commemorative night walk through the new tunnels, playing music as they went – songs the drivers had picked, and songs that celebrated the 1970s and 1980s club culture as well as the rebellions being waged in mining communities around the UK. This experience she has written up into a short Night Walk script. ‘That [the walk] to me was almost the most important piece of the commission, even though it couldn’t be public,’ she says. ‘It’s only public through its memory and atmosphere. When people read about it – and I hope people will read it – they will see and feel the imaginative potential of this walk, of the music, the throbbing sound through the tunnel. All of this is something that has built the new “Pink Depot”. We are exploring this idea of what it takes to make a building and what a building is.’

At the time of writing, in September, we don’t know if her script would go on display. What will, however, with a launch in November, is The Pink Depot book, along with four bright, blue cyanotypes, which are being turned into posters. Wakeford says: ‘I printed them with the last eight hours of light that came down the tunnels.’ The images burnt onto these posters are objects that tell The Pink Depot’s story: flowers from the flower market, flyers from the Market Tavern’s club nights, bolts, clips and pins from the tunnel construction, dirt from the excavations.

Although all this work she has produced is really crying out for an exhibition (take note please, TfL), that’s not within AoU’s remit. Hopefully, this article will convey some of the richness and complexity of the human stories that lie behind this new piece of infrastructure, as well as this artist’s huge endeavour and skill in encapsulating it.