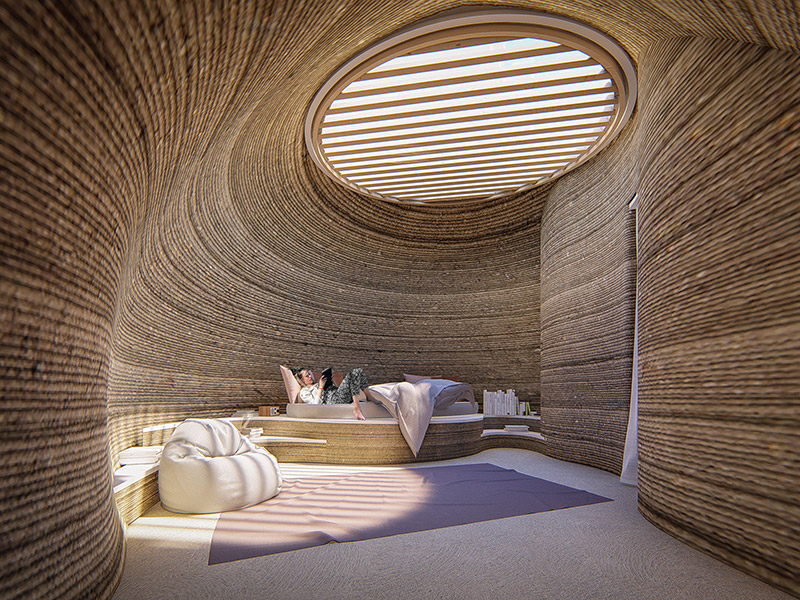 The winds of climate change have been storming through the design, architecture and construction sectors: there has not been a single trade show or conference in 2020 that hasn’t broadcast its focus on sustainability through a collective exercise in virtue signalling, with seminars, debates and Pecha Kuchas bristling with carbon-conscious topics, even if the very act of holding a trade show – shipping container-loads of furniture and fittings around the globe, from one show to the next, trailled by an eager entourage of exhibitors, speakers, guests and visitors – is the antithesis of sustainable behaviour.

But one of the prevailing and understandable anxieties for those whose profession relies on their ability to reinvent what has already been invented is that their creativity will be stifled by the now dominant mantra of reduce, re-use and recycle.

My optimism that this doesn’t have to be the case was boosted by a recent meeting with Italian architect Mario Cucinella. I had not been overly familiar with his work – apart from the inspirational Italian pavilion he curated for the 2018 Venice Architecture Biennale, enriching both the appreciation of and the potential for activating the Italian countryside, rather than focus on the cities. Living in balance with our planetary resources has long been on Cucinella’s mind. He launched his own School of Sustainability five years ago, developing a year-long masters programme at his practice in Bologna, which has now been enjoyed not just by his own staff but also hundreds of other architects. Here, they learn the tools for understanding and improving building performance because – as he says – ‘building performance is a design issue, not an engineering issue’. But that focus does not make his practice in any way reductive or ‘back to basics’ in its approach to form or materials. I was captivated by an elegant kindergarten he designed, which completed in 2015. The Guastalla School comprises a sculpted timber frame structure – mimicking the ‘belly of a whale’, as he says – each timber slice sandwiched between sections of glass to provide optimal connection with nature, the seasons and diurnal progress. The interior is large and loose, allowing for multiple adaptations according to topic or pedagogy.

The landscape around the building is part of the education, he says, which is about nature. ‘The kids don’t know the season unless they see the plants, the flowering in summer; in March there is a forest of bamboo where the butterflies come out. They grow their own food, and the children can cook it in their kitchen.’ The building itself is an educator, he says, ‘because we collect the water: the toilet water is from the rain and not the tap. It’s pedagogic for the kids – when they go back home, they ask their parents why are we flushing toilets from the tank?’

It is tantalising to imagine what these Guastalla pupils will think of as normal or aspirational as they move through the world; hopefully activated as agents for change. Cucinella is now fostering more agents for change through a scheme he is running, together with Italy’s Ministry of Culture, inviting teenagers to dream up the school of tomorrow. A three-day hackathon, involving 18 schools from all over Italy, resulted in proposals driven by the children’s own perceptions of what matters. Says Cucinella: ‘I was amazed that kids of 14, 15 years were focusing on waste recycling, solidarity and networking … asking questions like: why is my school not connected with other schools so we can see friends and share information? The school for them is like a tree; the roots are how the culture informs their future. They wanted a space they could organise for themselves – like an open library, where they could bring food. It’s nothing like the school of before.’

For Cucinella, a sustainable agenda means using an understanding of the past – the building materials and techniques that allowed humans to live distinctive, ‘zero carbon’ lifestyles for hundreds of years – while harnessing the tools of the present. He says: ‘I’m not nostalgic. I’m not saying we need to rebuild what we did. I’m saying maybe the knowledge we’re looking for is not just in front of us, but it’s also in back of us. Why were people able to design in different latitudes and still have complicity with the environment?’ Speaking of which, one of his current projects is the TECLA, a 3D-printed mud hut that can be created in days, anywhere that mud exists, using lightweight 3D printing cranes made by tech-company Wasp. Cucinella and Wasp were due to unveil the first mud house in Massa Lombarda, Italy, in April 2020. A huge amount of research has gone into devising optimal shapes and forms for the house, allowing modifications for different climates. Says Cucinella: ‘Some latitudes need less insulation, others more.’ Ventilation and fenestration can also be increased or reduced, according to light and climate conditions. Mud houses are nothing new, as he says: ‘In history there has been building in mud for over 3,000 years. In Iran, for example, some parts of these structures still remain.’ But this initiative brings cheap, fast and also humane housing to areas and situations where it is needed most. And when the need passes, ‘they can return to nature’, he says.

There are two ways to face the future, Cucinella concludes: ‘One is to say we are waiting and it’s coming, the other is to decide which future you want.’