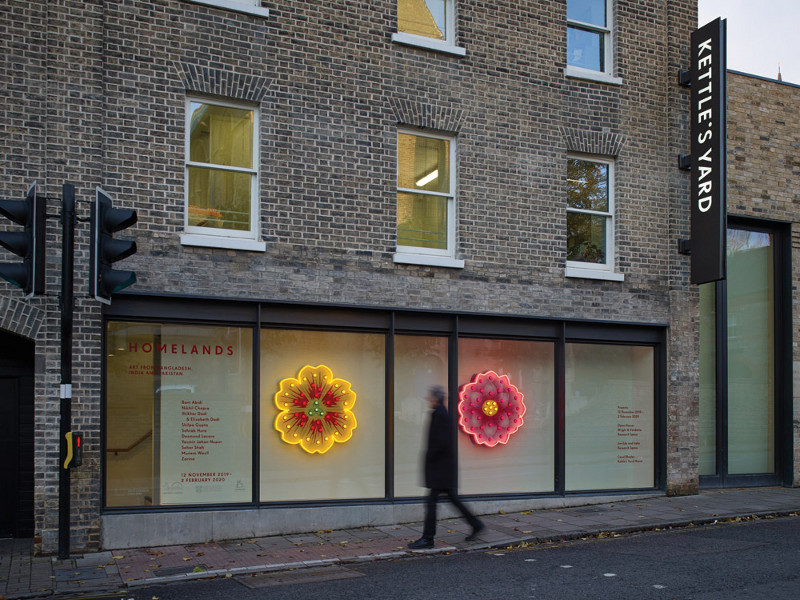 The Kettle’s Yard Homelands exhibition is an opportunity to interrogate what home really means to those whose countries are riven with strife and the threat of displacement. Veronica Simpson reports

What does home mean to you? What single possession would you take with you if you had to leave it in a hurry? How can we recreate home when we find ourselves thousands of miles from everything – and everyone – we know? Most of us have never had to confront the latter two questions. But displacement has become alarmingly normal – as of 2017, an estimated 65.5 million individuals have been forcibly displaced this century, due to war, conflict, persecution or human rights violations, according to the UN High Commissioner for Refugees. Coupled with a growing volatility in attitudes to migrants and paranoia around borders, this makes an appreciation of the concept of home even more vital.

Designers and architects frequently make their living from creating homes for clients, investing all their energies in defining those aspects of a place and that combination of form, materials and light that best translate into a contemporary haven. But such considerations are the luxuries of nations that have enjoyed peace and relative prosperity for many decades. Every one of the artists in the Homelands: Art from Bangladesh, India and Pakistan show at Kettle’s Yard in Cambridge has grown up in regions where enforced removal – and worse – are a part of their geographic and emotional landscape; and the perspectives they bring to the topic of home and belonging, through the art shown here, are profoundly affecting.

Two flowers greet us in glowing neon along the outer wall of Kettle’s Yard, and a third is presented to us at the entrance – a timeless gesture of welcome. These versions are by artist duo Iftikhar Dadi and Elizabeth Dadi. ‘Flowers are often used as national symbols,’ the show’s curator, Dr Devika Singh, says. ‘But they have extra resonance here: they can cross borders easily and cross-pollinate. Nikhil Chopra’s transient shack could be a shelter for a refugee. Behind it are the poignant miniatures of Desmond Lazaro

‘Many of the artworks are rooted in the context of a particular place, but they have the power to transcend this. They are contesting the idea of nationality.’

Bangladesh-born and -based artist Yasmin Jahan Nupur’s film is called, simply, Home. It shows Nupur wandering across a site that has belonged to her family for generations, a place where they lived, played and prayed. But her grandparents’ land was forcibly acquired by a government intent on attracting international investors with development prospects. What remains is scrappy vegetation, rocks, a gently ruined prayer house standing high on a plateau. But what vistas! As the film captures her wordlessly roaming this timeless landscape, she is reliving every precious childhood holiday she and her family spent there, according to a moving interview in the show’s catalogue: ‘For me, our village of Mohammadpur recalls specific personal memories but also ancient history and mythology, as well as a landscape I will carry with me for my whole life.’

Delhi-based photographer Sohrab Hura’s works here are from a photographic series called Snow, which he started in 2014, after first visiting Kashmir. He is not Kashmiri but is all too aware of the violence that has flared in the region ever since the then ruling British government split India into two independent states, India and Pakistan, in 1947, displacing around 12 million people along religious lines (Hindus to India, Muslims to Pakistan) and creating a huge refugee crisis. Pre-partition Kashmir has become an almost mythical place of peace and loveliness. Kettle’s Yard founder Jim Ede actually spent 14 months there working for the British army’s education department, after ill health forced him to leave the trenches of World War I; he described it as ‘the land of beauty and joy’.

Hura’s images capture that beauty, but there are clues about living with violence and conflict in these seemingly innocent scenes: you see a picturesque bend in a river, then realise the water is stained red with blood; four boulders are placed across a tree-lined road, creating a picturesque but also menacingly effective barrier; a man stands in the street with a snowball behind his back – is this play or is this something more sinister?

Against a pretty pastel background Munem Wasif has photographed objects the Rohingya people have brought with them to the refugee camps in Bangladesh, having been forced out of Myanmar by its military dictatorship. There are precious deeds and documents that speak of a hope of return, there is matted or crinkled vegetation from some beloved garden, there is also humour – a vividly coloured can of Spring Song, perfumed hairspray, gives the series its title. Wasif has been visiting these campsites since 2009. He says it is only now, after 10 years of research, that he feels able to display these precious objects of loss. A Child’s Boat for Aylan and Ghalib is a simple, folded up paper boat against a dark, inky background, by the artist Zarina

In a corner of this gallery, and accompanying all our ruminations, is the vigorous, irregular clacking of a kinetic artwork Song of the Ground from Shilpa Gupta, comprising two stones being banged together. But these are not just any stones – they were taken from the riverbed that flows from India into Bangladesh, one from each side of this border. They look identical, of course.

The second gallery has the kind of transient shack that could well form vital shelter for a refugee. It is actually an artwork by Nikhil Chopra. Here, we also have the poignant miniatures of Desmond Lazaro, featuring drawings of clips from his own father’s cine films, depicting parts of Britain to which he took his newly migrant family – holidays in Skegness, visits to Buckingham Palace – in an attempt to fit in, but the traditional miniature setting Lazaro uses beautifully highlights that pervading cultural clash.

Perhaps the most profound work of all – also the smallest – is by artist Zarina, A Child’s Boat for Aylan and Ghalib: a simple, folded up paper boat against a dark, inky background. It is made in memory of the drowned Syrian child Aylan Kurdi whose image, washed up on the beach in Turkey while trying to reach Europe, so struck the world in 2015. His brother Ghalib died with him. ‘Home isn’t bricks and walls,’ she says in an interview, ‘home is other people.’