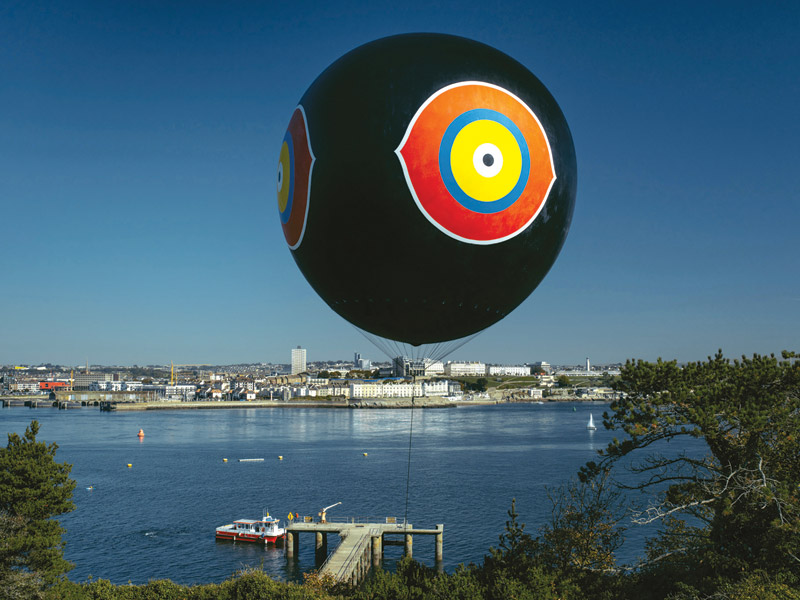 Plymouth is raising the bar for culture and tourism, launching the pilot for a major new art biennial, and building a £37m museum and contemporary art gallery. But will that be enough to reverse decades of economic decline? Veronica Simpson reports

Another autumn, another art biennial; another city bidding to reframe people's perceptions of it through an intense dose of arty activities. Plymouth is the latest in a long line of cities trying to propel itself out of economic decline via a festival of visual culture. Only for Plymouth this isn’t new. It has been hosting an ‘art weekender’ every autumn for the past four years.

The Art Weekender, as a showcase for local art and artists, has blossomed from an initial 86 listings in its first year (2015) to 140 listings across 70 venues in September 2018, and organisers were predicting an increase on last year’s audience of 17,000. In which case, you might ask: does the city need a biennial?

According to the curator for this year’s pilot, Tom Trevor, it does. ‘This is an exciting time to be in Plymouth,’ he told a modest gathering of national and local press at its launch. ‘There is nothing like this being done in the whole of the South West.’ The new art biennial, provisionally dubbed the Atlantic Project, coincides with the Art Weekender, but substantially boosts its appeal by inviting an impressive list of more than 30 international artists – among them Hito Steyerl, recently listed as number one in the Art Review Power 100 round-up of the world’s most influential artists – to position their works strategically around the city to activate discussions and exploration over its three-week duration. Funded in part via the Arts Council England’s Ambition for Excellence programme – albeit match-funded by the City Council – the aim is not just to use that art world hit list to draw the interest of culturally-curious visitors from further afield, but also to generate a sense among Plymouth locals of the city’s issues being part of a much bigger, global narrative. Plymouth’s is a story very particular to port cities around Europe: of pre-war boom, Second World War devastation, post-war regenerative ambition (albeit misguidedly carcentric), followed by post-industrial, and now post-retail decline. The artists and works Trevor has solicited speak eloquently to current issues of migration and displacement, exploration and exploitation. ‘As a deep-water port facing the Atlantic, its history is bound up with maritime exploration, in pursuit of the unknown worlds that lie over the horizon,’ he says, invoking Francis Drake’s circumnavigation of the globe – which began from Plymouth – on behalf of the first Queen Elizabeth. This biennial is not shirking the dark side of Britain’s 16th-century colonial expansion: namely, the oppression and slavery of native populations. It’s a timely and topical intervention, with the Mayflower’s 400th anniversary looming, in 2020.

The city will be capitalising on that momentous anniversary, timing the launch of a major new £37m cultural venue, The Box, to coincide with it. Formed through the vigorous excavation, refurbishment and expansion of its Edwardian museum, a major new wing is being added, part art gallery, part archive, whose concrete base cantilevers out at the museum’s rear over a new civic plaza that will be formed between museum/gallery and its neighbour, a badly bombed but now sparingly refurbished church whose interior has been reinvented as the South West’s largest single gallery space. A major exhibition on the Mayflower will be opening at the building’s launch, in April 2020, designed by Event Communications. Its narratives will include an acknowledgement of the damage done to indigenous populations by those early Plymouth migrants.

In harmony with this dark side, Trevor’s biennial very much plays to current anxieties. Called After the Future, the best works, for me, are those that activate Plymouth’s most fascinating but semi-derelict buildings. The Millennium Building, a vast former Thirties’ cinema-turned-nightclub in the city’s once notorious clubbing district features Ryoji Ikeda’s ‘radar’ – a huge mapping of the cosmos projected against one wall: a mesmerising work accompanied by a menacing soundtrack. Also the Civic Centre has been partially brought back to life: a 14-storey concrete and glass modernist masterpiece designed at a time of great civic ambition by Hector Stirling and opened by the Queen in 1962, it was ultimately deemed too expensive to maintain by the Council and has been unoccupied for decades. For the biennial, its basement features a scale replica of the tower, which will hopefully be sunk in a post-apocalyptic sand dune if the right sand arrived in time (by Angolan artist Kiluanji Kia Henda), while on an upper floor, Hito Steyerl provides a filmed lecture on how to be invisible (avoiding or subverting the increasing prevalence of surveillance technology), complete with sandbag seating.

While the Millennium Building’s future is unclear, it’s not all gloom for the Civic Centre – Urban Splash, which bought it for £1 in 2015, are apparently going ahead with its regeneration as desirable apartments.

As Trevor has scattered his artists all over the city, there are opportunities to enjoy the more obvious, enduring delights. On a sunny September afternoon, there was much enjoyment to be had taking a ferry past Drake’s Island to see a 6m-wide tethered balloon called Repellent Eye (a replica of a ‘scare eye’ which indigenous Americans used to repel evil spirits) created by American collective Postcommodity. Also, given the city’s reputation for carousing, I imagine the work of Danish artists Superflex will go down a treat: it has created an ‘open-source’ beer, called the Atlantic Brew, in conjunction with the Real Ideas Organisation, City College Plymouth and local brewer Summerskills. This beer will be sold across the city, and in a community-run pub called The Clipper. More than the art festivals, more even than the new cultural building, what is most impressive about Plymouth is the sense that all these initiatives come from a shared ambition and energy around reviving the city’s fortunes. All of the above initiatives were apparently born of a collective vision for the city from its intellectual, cultural and civic leaders that arose while they were planning a bid for City of Culture. Hull may have secured that trophy, but the attempt sewed the seeds of renewed vision: to harness the city’s existing talents to make good things happen. The citywide Horizon programme was the result, collaboratively steered by the same civic, cultural and academic institutions. There aims are international profile, community engagement, and talent development.

Uplifting stuff. But maintaining that energy and enthusiasm, and spreading the benefits out beyond the intellectual, creative minority, is ultimately what will make these arty endeavours add up to more than the sum of their parts.