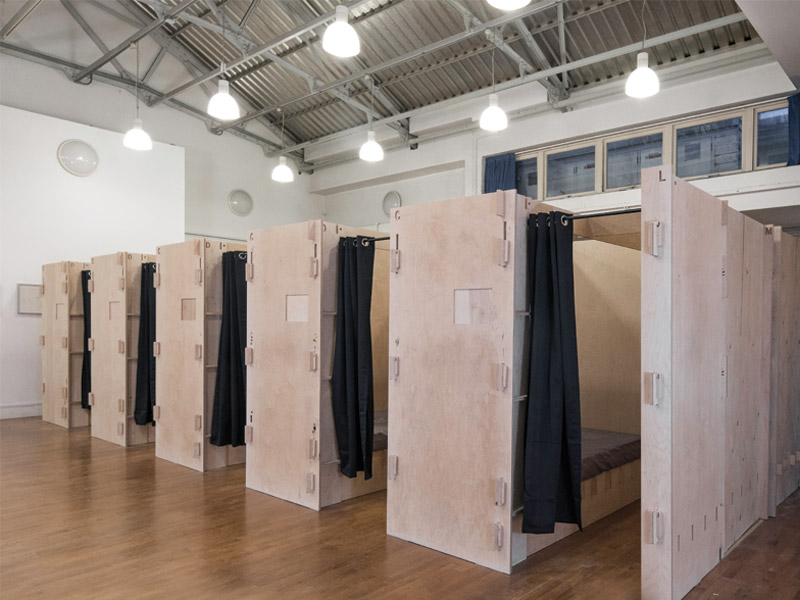 Dignity, privacy, security – these are qualities sorely lacking in the lives of the UK’s homeless. But Reed Watts Architects have seized the chance to make a difference with some attractive and robust flat-pack sleeping pods, for social justice and housing charity Commonweal. Veronica Simpson reports

There are at least 320,000 homeless people in the UK, according to a late 2018 report from housing charity Shelter – a four per cent rise, or a year-on-year increase of 13,000 during 2017, but an even more shocking increase of some 57 per cent since 2011. More than half of these people are in London. And while there is some – albeit woefully inadequate – provision within social services to help those who are most vulnerable, there is a population within these figures for whom nobody currently takes responsibility: migrant workers. Often construction or maintenance workers on zero hours contracts, there are thousands who seek to spend their time while working in the UK living in tents or other flimsy, provisional structures rather than risk the exploitation and degradations of London’s private rental market.

It was, initially, this particular group that social justice and housing charity Commonweal Housing wanted to help when it launched an architectural competition in 2017. Says architect Matt Watts: ‘These are people who can afford housing but choose to sleep in tents either because they’ve been ripped off in the past or want to send as much money as possible back to their families. But there are issues locally with encroachment on public space and what to do about littering. So Commonweal wanted to see what could be done to help both those communities at the same time.’ Watts is standing next to his practice Reed Watts’ competition-winning solution: a set of 10 robust cabins of fireproof birch plywood currently installed in the warm, brightly lit hall that Lewisham charity 999 Club offers to keep the local homeless population safe, warm and well at night. To explore the issue, Reeds Watts immersed itself in research on migrant worker communities conducted by Thames Reach (a specialist on homelessness and related issues). It concluded that the quickest, most deliverable and desirable solution was these flat-pack pods, which can be easily stored and assembled in empty spaces – of which London has plenty – when required. A couple of prototypes were trialled in 2018 both at Housing Justice’s site in Hillingdon and the 999 Club. Says Watts: ‘The feedback we had was really encouraging. One guy who stayed in them had been homeless for a long time. He was encouraged to try one of these, and it made him feel maybe it was time to find something more permanent as he found it was such a positive thing to have his own space.’

More furniture than architecture, the pods are 2.1m high, 2.1m in length and 1.9m wide. Each 18mm-thick CNC milled panel is labelled, and slots into place without the need for tools – wooden pegs keep the structures in place, secured or removed with a simple mallet. Says Watts: ‘We did look at options for putting a roof on top, but then you get into issues of ventilation, and separate lighting. We wanted to keep them as simple as possible so you don’t have to put in lots of infrastructure.’ In a hall in Lewisham, a set of sleeping pods in fireproof birch plywood are offered to the local homeless by local charity 999 Club - Cameron Maynard

Compared to the usual offer at 999 Club – mattresses placed around a shared floor – these pods are a big step up. They enable people to keep their bedding and possessions in one place rather than clear them into a pile in the corner every morning, along with everyone else’s. There is a curtain across the pod entrance so they have more control over privacy. Following improvements to the prototypes – the introduction of a raised sleeping platform, which allows for storage underneath – these new versions, which also feature integral shelving, help tenants to keep their things in order. Says Watts: ‘It’s nice for people not to be on the floor, it feels less like camping. And the bed can be used as a sort of sofa for people to sit on. You can even have a private chat with someone in here, in comfort.’

Currently Reed Watts is preparing the Creative Commons licence so it can offer the design on CAD files for free to deserving charities or organisations who apply to them. With the units costing between £500 and £800 to build (depending on type of timber and fire proofing) Watts hopes that this cost sits comfortably within the remit of fundraising initiatives; pods could even be sponsored by local businesses, he says. Interest is already scaling up: a homeless charity in Chicago has made enquiries, a charity in Holloway has just taken four pods, for their young people’s shelter (aged 18-21), and a shelter run by Housing Justice is taking 15.

It takes a lot more than a pod to fix the situation, of course. Founded 26 years ago, 999 Club’s offer includes a hot evening meal, breakfast and access to the charity’s expert help and advice (on jobs, health and housing), which is freely provided. The scale of the problem currently is hard to quantify, says Tim Fallon, chief executive of the 999 Club: ‘We know that homelessness has been rising – recent official figures indicate that in the London borough of Lewisham, where we’re based, the number of homeless people has gone up eight per cent since last year so now 1 person in 45 in the borough is homeless.

‘However, the official figures don’t capture everyone we know who is rough sleeping, and homelessness is more than someone sleeping rough on the street. So many people are what we call “hidden homeless” – sleeping in hostels, or going from one friend’s sofa to another. We had one person staying with us late last year who had been sofa surfing for four years. We helped her to find somewhere more permanent to live.’