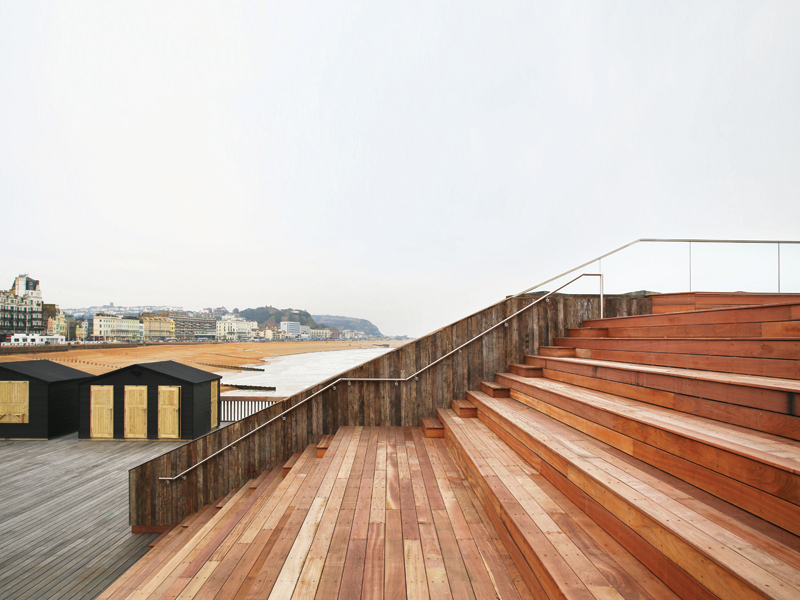 It was a thrill to be there when it happened: on what the BBC called ‘the biggest night of the year for British architecture’, I was standing in a packed room, in Hastings pier’s new visitor centre, surrounded by assorted members of architecture practice dRMM, all in fancy dress (it was Halloween) plus many people from Hastings who had helped to make the pier’s restoration happen. Just after 8.30pm, our eyes were all fixed on a giant TV screen. Beamed by the BBC live from the Roundhouse in Camden, the Stirling Prize winning announcement was read out by RIBA president Ben Wiltshire, at which point, I swear, the energy and excitement in that room could have levitated this freshly rebuilt platform several feet above its new steel fixings.

Hastings Pier is an example of what needs to happen far more often in the way that architecture is practised around the UK – for better or worse. For worse, in the sense that ‘austerity’ Britain means local councils no longer have the money to keep vital community assets going. Although, in this case, Hastings Pier had been flogged off long ago; for the past two decades it had been owned by an offshore company, based in Panama, which goes by the Harry Potter-ish name of Ravenclaw. Ravenclaw stood by and did nothing when the pier was declared ‘unsafe’ in 2005. Again, it did nothing in 2010 when (thanks to a couple of careless youth and some illicit smoking) a blaze started half way out to sea. Because the pier had been declared unsafe, the fire services summoned to the spot could only stand by and watch as most of this iconic structure, built 145 years previously, burned to a crisp – almost everything except the section nearest to land, and the Victorian, domed pavilion that stood at its entrance. After three years of staring at this eyesore, day in, day out, the local community had galvanised enough supporters around the idea of its restoration – forming the Hastings Pier Charity in the process – that it persuaded the council to execute a compulsory purchase of the pier, and then sell it to the charity for £1.

Around 3,000 people within that community had bought into the scheme for £100 a share, in order to start the rebuilding fund. Thanks to the strong appeal of the design proposal developed together with dRMM, the Heritage Lottery Fund was persuaded to chuck in another £11m. Which meant the rebuild was on.

But that rebuild was only possible thanks to the skills volunteered within the community. Rising from the ashes, Hastings Pier to a design by dRMM has won the 2017 Sterling Prize

Luckily, that included specialist pier engineer, Peter Wheeler, who advised on how best to deploy the 3,000 tonnes of new steel in such a way as to keep the elements at bay, as well as construction manager, David Spooner, who helped to co-ordinate the team of 500-plus people and a tight budget that left almost no room for manoeuvre. For example, when it was realised that as much as three quarters of the structure had to be ripped out and replaced, certain niceties had to be lost. Spooner told me: ‘The roof of the pavilion was going to be copper; instead it’s zinc. The pavilion cladding was going to be steel – which would have looked marvellous against the water.

Instead, it’s reclaimed decking.’ With budgets pared to the bone, resourcefulness kicks in; he says: ‘Almost nothing [of what was left] went in the skip. The decking that was saved has all been used for either cladding or furniture.’ And despite these pressures, he calls this, ‘the best job I ever worked on’. No wonder dRMM director Sadie Morgan – who was leading the Hastings pier party, while her co-directors Alex de Rijke and Philip Marsh were at the Roundhouse – became emotional when she told the Hastings gathering: ‘I have rarely wanted any prize more. Not for dRMM, but for the spirit of the people of Hastings and the wonderful thing that this pier is.’ Rising from the ashes, Hastings Pier to a design by dRMM has won the 2017 Sterling Prize

The brave thing dRMM did with this project was to eschew the usual statement building, but instead create a generous amenity space, a universal platform on which the community could stage its own events.

This meant expanding the width of the pier to make it viable for everything from concerts to festivals, circus performances to weddings, and leaving a stunning, open promenade for strolling and interacting with each other and the elements the rest of the time. The original pavilion has been restored but turned into an airy, open-plan, cafe and restaurant, while a simple visitor centre is offered for indoor events, exhibitions and educational activities.

There’s a beauty and humility to this structure, with its crenellated profile, and almost fully glazed, sea-facing elevation. Its town-facing side incorporates wide steps, which double-up as amphitheatre-style seating, leading on to a rooftop belvedere. Clever louvred-timber balustrading along the pier heightens the sense of ‘walking on water’. As key fundraiser Jess Steele said on the night, what dRMM has done is create ‘a plinth on which anything can happen’. Future plans include a mobile timber canopy that traverses its entire 280m length, making money-making activities less vulnerable to variations in weather; several major 2017 events had to be cancelled due to rain, which resulted in the charity failing to meet financial targets. Spooner told me that the maintenance bill is £100,000 a year, while insurance adds another £150,000 to its annual outgoings. ‘That’s a lot of fish and chips you have to sell to make that happen,’ he said.

While de Rijke quite rightly commented: ‘Special buildings don’t happen without special clients,’ this project is really a demonstration of the power of true collaboration. It’s inevitable that the Stirling Prize citation would be architect-centric: ‘dRMM shows what incredibly talented and dedicated architects can do: inspire, think big, interact and engage with communities and clients to help them to achieve the seemingly impossible; this is a great message for young architects following in their footsteps’. But none of this would have happened without the combined energies and ambitions of the local community. It’s sad to hear as FX goes to press that the Hastings Pier Charity has gone bust.

While the pier remains open for 2018, we will keep our fingers crossed that alternative solutions for funding this inspiring landmark can be found.