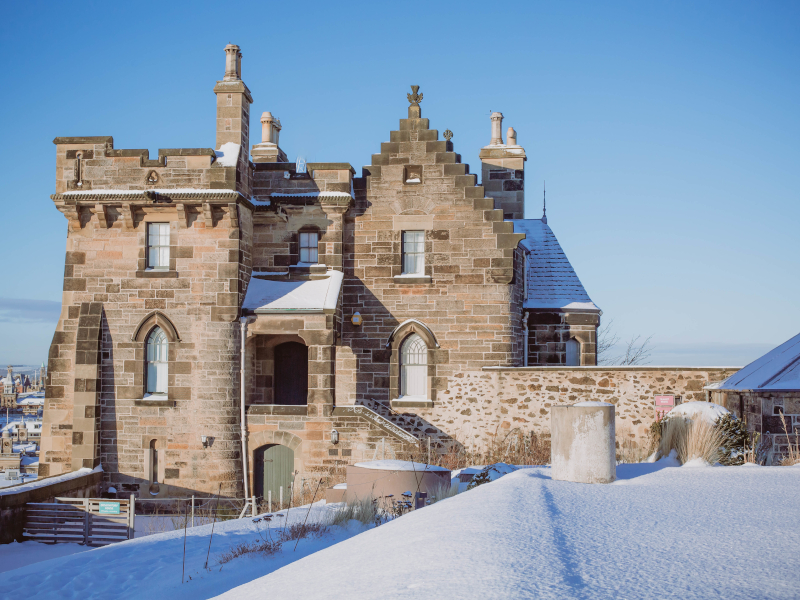 OBSERVATORY HOUSE is one of Edinburgh’s most interesting ancient buildings. It sits high up on the same craggy, volcanic mound that hosts the chunk of pastiche Parthenon that has become a major landmark for the city, visible for miles around, with well-known Arthur’s Seat just off in the distance. Close by are other landmarks, the Nelson Monument and the miniature Greek temple designed by William Henry Playfair to honour his uncle John Playfair, the first president of the Astronomical Society that founded an Observatory up here on Calton Hill in 1776 and whose similarly classically inspired later buildings his nephew also designed. 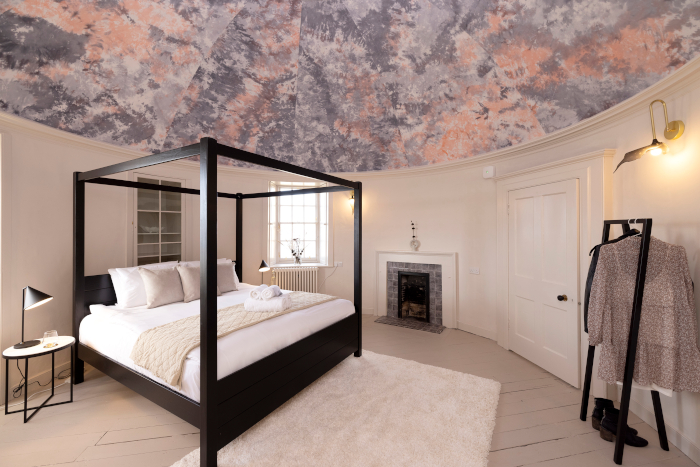 You could not really find a more iconic – or lovingly restored and reanimated – architectural cluster in this picturesque Scottish city. So, to get to spend the night in one of them is pretty special, not just for the privilege of being accommodated among these notable, public monuments to the Scottish Enlightenment, but also for the astonishing views it gives down onto the city, out to the hills beyond and across the waters of Leith. As I and my daughter – also staying here – ricocheted from one astonishing vista to another, each quirky room offering up new perspectives, she declared: ‘It’s like flying’. 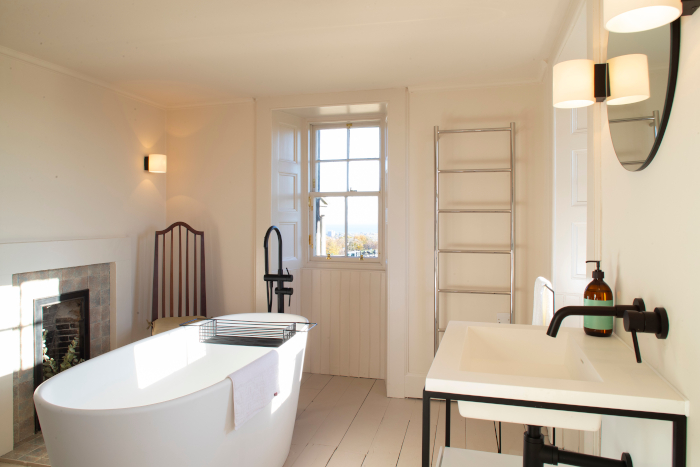 The lower bathroom suite looks out onto the courtyard. Image Credit: ANNA HENLY

There are now two holiday apartments in Observatory House, run by Collective, an artist-led charity – the proceeds from which will be invested back into their admirable arts programme, also run from this hill. Observatory House is the last element in their ambitious project to restore and revive this site, bringing it back into public use after years of decline that had pushed these ancient structures to the brink of dereliction. The reason Collective can even afford to do so is because the Town Council of Edinburgh purchased Calton Hill in 1724, with a commitment to use it ‘in the common good’ as the then burgeoning city’s first public green space. Thankfully, that commitment is still legally binding, making it off limits to any developer or private individual, and making it possible and desirable for Collective to lease it cheaply from the council and devote their funds to turning its eccentric assortment of buildings into galleries, a workshop, office and retail space. They were also able to add a handsome, contemporary but sympathetic restaurant in the corner, The Lookout, to reward visitors for their willingness to attempt the steep climb up here, as well as another means of funding arts activities. That part of the building and restoration scheme was masterminded and designed by the confusingly similarly named but entirely separate Collective Architecture practice, which was completed in 2018. It has been a major success (pandemic notwithstanding), in raising the ambition and visibility of the arts charity’s commissions, residencies, outreach programmes and invitations to international artists.

Observatory House was, however, the first building on that site, representing the original Observatory. Completed in 1776, it was designed by James Craig, famous for masterplanning Edinburgh’s Georgian New Town. It was added to in the 19th century but still retains the circular tower he built, the oculus at the top of which gave astronomers 360° views of the city as well as the whole of the night sky. Sadly, that oculus was covered over when Edinburgh Council joined forces with a historic house lettings agency to turn it into holiday apartments, which it ran until that company went into administration 15 years ago. Since then, this Grade A listed building had been slowly declining. When Kate Gray, then director of the arty Collective, had the vision to incorporate this building into its programme, as a possible artist residency base, but mainly for holiday lettings, she commissioned Collective Architecture to bring the same elegantly contemporary aesthetic to this atmospheric building that they had achieved elsewhere. 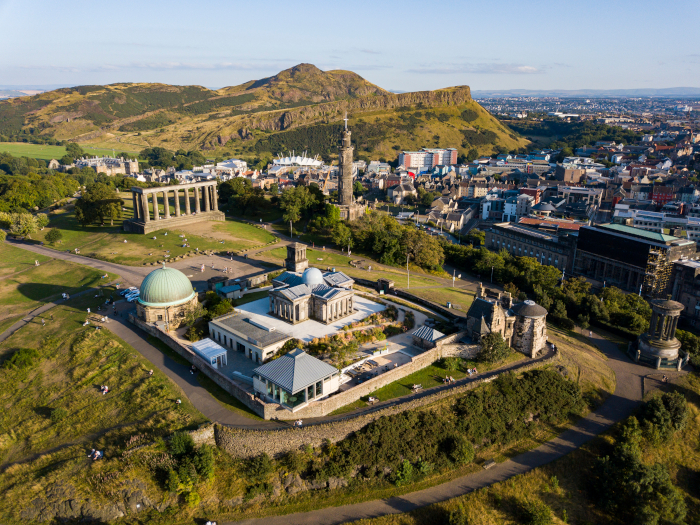 Project architect Emma Fairburn describes the original conversion and interior design as ‘very pastiche. It was all very dodgy, old wallpaper and didn’t look good; they hadn’t done it justice.’ But as a Category A listed building, they were unable to do anything drastic. ‘The main things we talked about were wanting it to feel very social and inviting, making the kitchen the heart of the home,’ says Fairburn. On three floors, they designed the spaces so that they can be joined together for a whole house, three double-bed, six-person let, or let as two. The ground and first floor form the larger, luxurious apartment, with a delightful kitchen on the ground floor – that offers views back to the pseudo Parthenon – and which connects with a glamorous dining/meeting room in the round tower. They demolished a connecting hallway between dining room and kitchen to expand the kitchen and open up vistas at both ends. A small bedroom on the first floor was turned into a bathroom to give the adjacent bedroom that en suite aspect. The final intervention, says Fairburn, was a sunken courtyard on the lower ground floor ‘that hadn’t been touched for 15 years; it was kind of locked, you couldn’t get into it, and it had outhouses for storing coal. We rebuilt a little extension there to make a nice bathroom, just to elevate that lower floor flat into something special’. The lower bathroom now looks onto that courtyard through glazed doors, and ferns are planned to fill up the enclosing wall.

‘In terms of interiors, we’ve very much created a blank canvas for Collective to get their artists involved in the more wacky interventions,’ says Fairburn. These include bespoke wallpaper by Rabiya Choudhry, a series of paintings on the wall of the dining room by artist Christian Newby, a textile that wraps around the whole oculus-shaped bedroom ceiling in the master suite by Rachel Adams, and a kitchen for which the design, cabinetry and shelving were conjured by artist Thomas Aitchison. These are all people who the artist-run Collective had worked with in the past, and the commissions and briefs were managed by Gray. Gray also decided that all the floors should be the same colour, the walls and ceilings likewise, gallery-style, so that the art interventions stood out. 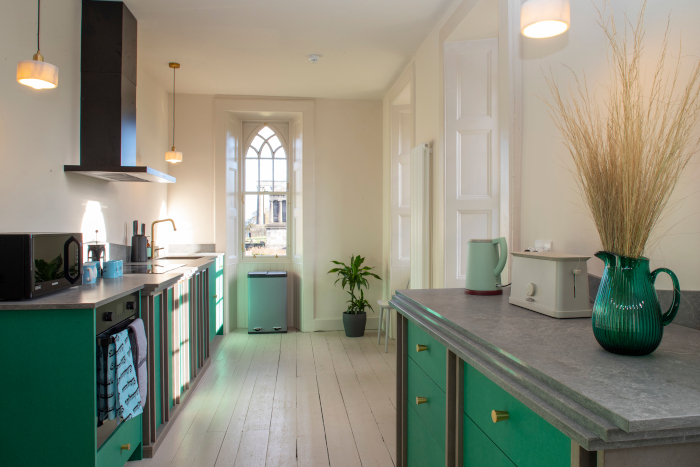 It is not unusual for art galleries to offer high-quality accommodation on the same site as their exhibition spaces, and cafés or restaurants are now a given for any cultural destination. But anything else of this quality – I am thinking Hauser & Wirth Somerset, or at Luma Arles in Provence – is usually funded by the super wealthy individuals who own the galleries, the income from which goes into their pockets. I love the fact that Edinburgh, this rather elitist Scottish city, has allowed the best spot to be taken by a group of artists whose mission is to enrich possibilities for other artists and for audiences everywhere.