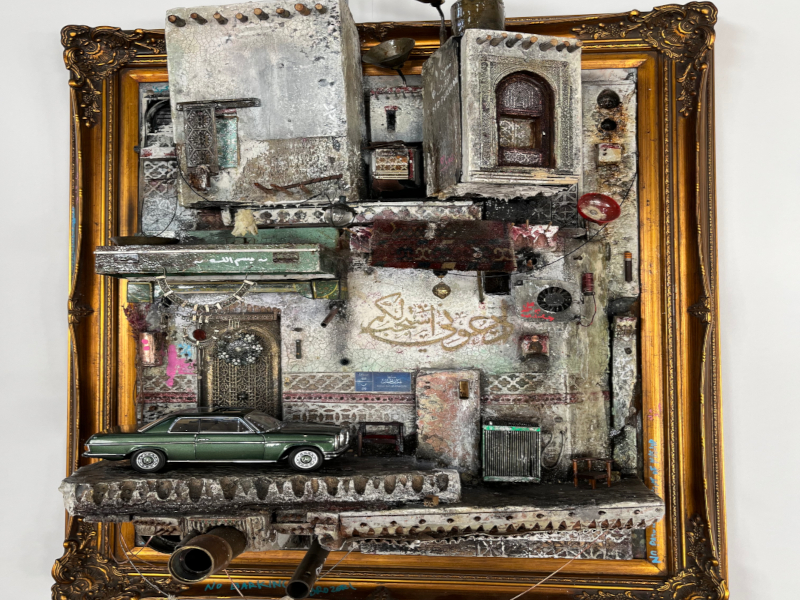 HOW DO WE value the things we love? How do we show the ways in which they are precious to us? For Syrian-born architect Mohamad Hafez, there was a particular combination of powerful factors inspiring a body of work that has evolved over almost 20 years, but gained special resonance in the last few. He had gone to study architecture in the US – on a ‘one way’ visa – in 2003, and was suffering intense homesickness. Almost as a form of art therapy, he started using his modelling skills to fabricate miniature sculptural scenarios that reminded him of home, initially in plaster. Since the outbreak of the Syrian war in 2013, his motivation took a different twist, sparked by anxiety over what might be left of his former home city Damascus. His sculptures transformed into delicately worked, elaborate assemblages mostly comprising of found or salvaged elements, paint and scrap metal, which are at once both utterly exotic and familiar, full of the inventive repurposing of things, such as ornamental earrings used as chandeliers, or elements incorporated from old transistor radios. 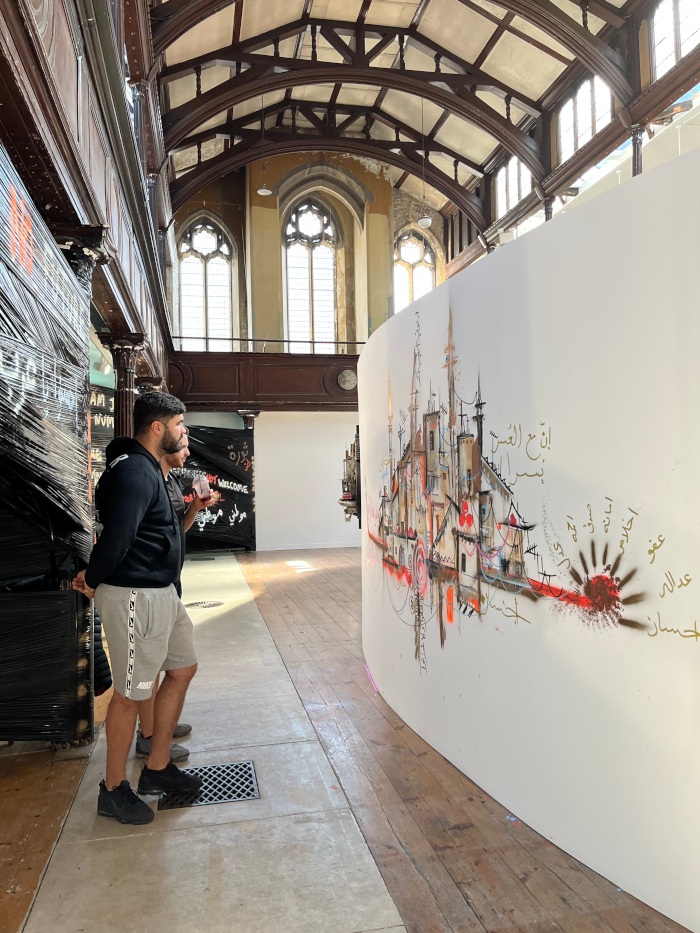 The painting not only depicts the cityscape, but also includes references in Arabic to virtues such as justice, doing good, being trustworthy and honesty. Image Credit: VERONICA SIMPSON

After years of making these small, scenic mementos in secret, he decided to exhibit them in public and to serve a desire to reclaim the word refugee and humanise it by touring these works around the globe and talking about the vanishing world they represent. Now living a relatively affluent Western life as a practicing architect and teacher, based in Newhaven, Connecticut, he says: ‘I thought the bare minimum responsibility I’d have is to raise awareness…to share the stories, to show what is so rich about the region and what is so devastating that somebody could risk all their family in a little boat over the Mediterranean.’

Hafez and his works were a star turn at the Brighton Festival this year (which ran mid-April to late May), having been invited by one of the festival’s guest directors, Marwa al-Sabouni, herself a Syrian born architect. Hafez’s show, called ‘Journeys From An Absent Present to a Lost Past’, was exhibited in a former church now repurposed as Fabrica art gallery, its high ceilings and gothic windows giving shelter to work that pulsates with displacement and yearning for home.

He tells me: ‘As an artist and an architect I’m very intrigued by the shared humanity and the shared human conceptions around ideas of home. I am always caught by surprise, that these exhibits reveal a huge common denominator between humans. But we are living in a very divided time and othering of people, and saying: “oh, that’s a worthy refugee, and this one’s less worthy”. I think that’s where art comes into play really. I’m just highlighting that commonality between humans. At the very least holding a mirror up to society.’

However, he finds that there is usually a strongly positive reaction to his works. ‘It’s amazing. People from all walks of life find a relationship with this work. I’ve yet to figure out what it is with miniatures that intrigues humans, of so many different backgrounds, so many different ages. I know that I use beauty as the lure. We long for beauty. And people have a hard time with my work because they want to say: “it’s beautiful but it’s also kind of ugly and sad at the same time”. It’s those mixed emotions I turn back to them [and say] “welcome to the last 20 years of my life”.’

I mention a saying I recently heard, from French philosopher Blaise Pascale: ‘In difficult times keep something beautiful in your heart.’ He agrees: ‘In a way I lucked out with channeling my homesickness into this beautiful, highly detailed work. I’m a big sucker for beauty, a big sucker for design and I think had I not had this embedded in my mind I could have got stuck in a heavy depression. But instead, I have no qualms spending hundreds of hours detailing these. It’s super meditative.’ 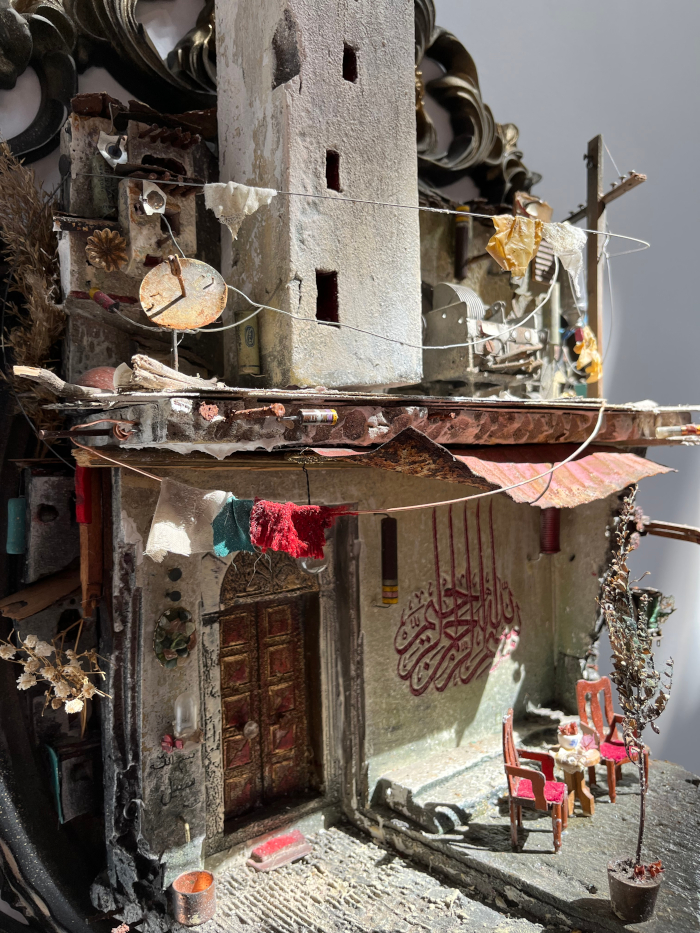 A miniature reminscent of old Damascene houses with Arabic inscriptions that depicts the basmala that prefaces every chapter of the Quran: ‘In the name of Allah, the most beneficient, the most merciful’. Image Credit: VERONICA SIMPSON

At the start of lockdown in 2020, however, he scaled up this yearning for home, for community and translated it into an actual, life-sized cafe, the Pistachio Café, in Newhaven. ‘It’s trying to replicate some of the atmosphere of these miniatures. It’s a very French baroque space, literally a living room, with crystal chandeliers and wallpaper and so on, Persian rugs and things people don’t typically expect in a public coffee house.’ It’s been going for two years, and attracting not just other homesick sorts from the Persian diaspora. ‘Everybody comes,’ says Hafez. ‘We have a lot of refugee chefs, I have a huge appetite and palate, we carry so many Turkish, Syrian, Lebanese, Afghan, Italian and Greek [foods]. And it’s full of antiques and little radios I also use for my art work. It’s a way to build that common humanity. What lures you in could be the detail and the beauty and then the reality sneaks up on the viewer: “wait a second, this guy is also Syrian, Muslim, Arab, a third world refugee, an immigrant himself.” It’s using food and beauty as a form of diplomacy. It’s really a social practice experiment, very fulfilling. And at night we have all sorts of cultural salons, music, poetry.’ 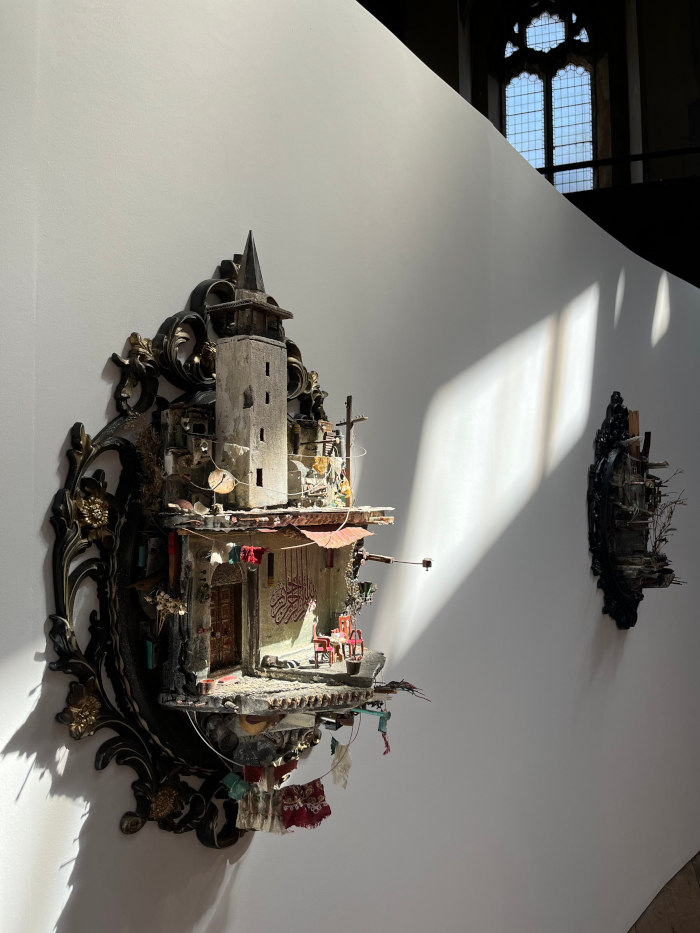 One of Hafez’s miniatures, with an inscription, again quoting the the Quran, that states: ‘Invoke me [Allah], and I will respond to you’. Image Credit: VERONICA SIMPSON

I express surprise that there is such an inclusive spirit in what I perceived to be a hugely affluent, North American region. ‘It’s a well kept secret,’ he tells me. ‘Newhaven is a sanctuary city. There are a few sanctuary cities in the US. Connecticut has Yale University and that draws people from all over. The teacher base alone is very diverse. It’s one of few sanctuary cities in America where undocumented immigrants cannot be deported, so it’s a safe haven for them. I didn’t know that about it when I moved there, but it’s wonderful.’ Despite it all, it seems like Hafez has made a home – of sorts.

Brighton Festival guest director Marwa al-Sabouni is the author of The Search for Home and Building for Hope, looking at the built environment and the impact of its destruction and reconstruction in times of war