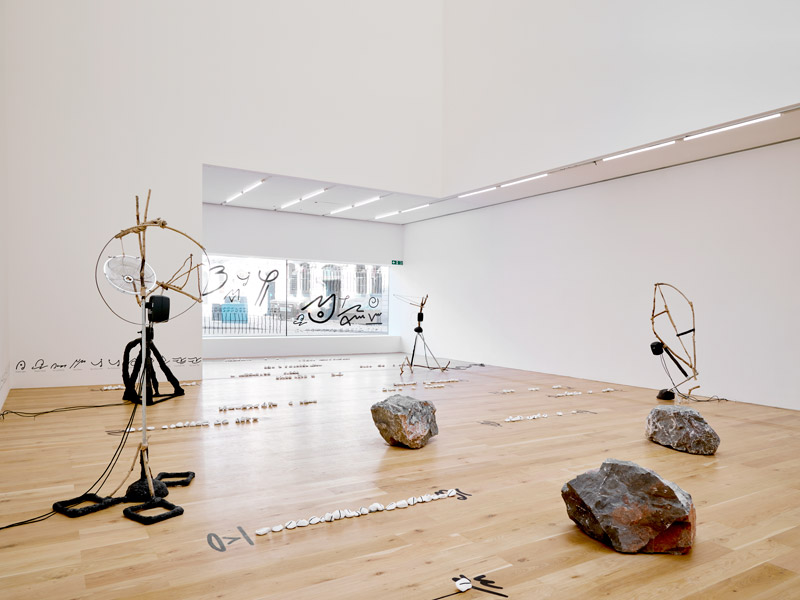 An exhibition, which celebrates craftsmanship ancient and new and the ingenuity of the creative mind, brings reason for hope in the new year. Veronica Simpson finds inspiration at Nottingham Contemporary.

AT THE time of my writing this, 2021 is limping to a close, and I’m sure we all feel we have had a bellyful of bleakness and gloomy prognoses. So it was a relief to wander into the latest exhibition at Nottingham Contemporary and find a very different take on the prevailing cultural obsession with the anthropocene – the official geological term for this era where humans have overtaken nature as the dominant planetary force.

Our Silver City imagines Nottingham in 2094, after a series of extreme environmental events. But where most future-facing, anthropocentric art exhibitions major on the narratives and aesthetics of despair and disaster, this one has a strong undercurrent of resilience. With four distinctive spaces curated by three individual artists – Femke Herregraven, Celine Condorelli and Grace Ndiritu – I am particularly intrigued by Herregraven’s installation, Wet Spells (2021).

For this futuristic scenario, Herregraven and her collaborative assistants (including pupils from local schools) have made weather patterns the central event. More to the point, they imagine a future where the most prized skills are those of accurately predicting temperature, cloud cover, pollution, humidity and the orientation of the sun and moon.

A whole hieroglyphic language has been conjured (by Herregraven together with graphic artist Benjamin McMillan) to indicate precise conditions, and these symbols are arranged around Gallery 4 along the lower part of the far wall and across the windows and skylight. They are also distributed over the floor, in a variety of puzzling but obviously meaningful, snakes and ladders-ish configurations. And we all get to play this game: we are asked, as we enter the room, to pick up a pointy white stone from a pile to our left – a stone with a single crisp, black mark on it – and place it by the hieroglyphic that we think best represents the likely conditions in 2094. 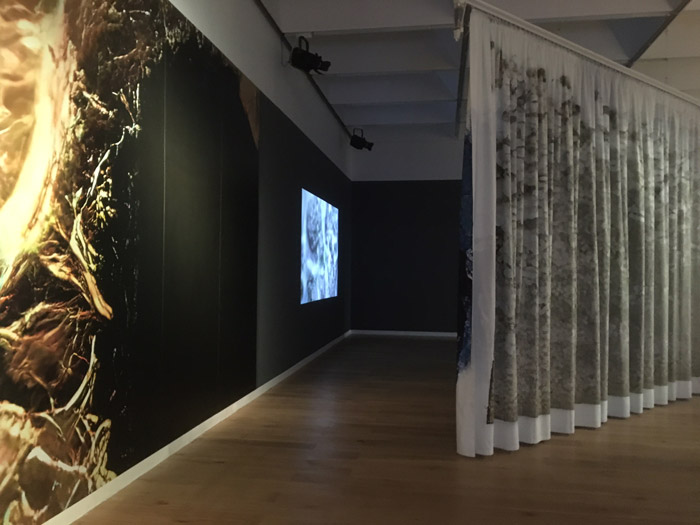 This curiosity-provoking, interactive task is enhanced by a soundtrack of crackling radio transmissions bearing the faint sound of children’s voices reciting either real or fictional – it’s hard to tell over the crackle - local folk sayings about the weather. This five channel sound piece features the voices of the aforementioned Nottingham pupils, and in a nice twist that links future fiction with today’s reality, the rhymes and sayings we hear correspond to real time data from a weather station installed on the gallery roof.

The broadcast is transmitted via five, black speakers perched in weird, spindly structures made from papier-mache, metal and driftwood, allegedly salvaged from the floods across Europe of 2021. Boulders, nicely speckled with their own mysterious but natural markings, are arranged around the room in a ‘prediction circle’. With its evocation of ancient lore, primitive rituals, runic wisdom and creatively hacked or engineered analogue technology harnessed to future survival tactics, it takes the viewer to a very interesting space that stakes its faith on human ingenuity even in the bleakest scenario.

There is no shortage of interesting spaces in Our Silver City 2094, and here perhaps the extended gestation of the show – thanks to the pandemic, brewing over three years rather than two – has benefitted the richness and variety of the installations. Berlin and New York based producer Prem Krishnamurthy has played midwife to these unusual future fictions. He worked closely with the artists, the curatorial team and brought in local poet and novelist Liz Jensen, to write an evocative novella about their imaginative landscapes, which also sets the tone for the explanatory texts that clarify what is happening in each gallery. These are named after the four cardinal points of the compass. The first is East, and acts as an introduction, with real and historic maps of Nottingham from 1800 and 1904, as well as traffic analysis charts from the 1970s – stained and torn, as if by some disaster – displayed on the wall; alongside them are more recent council reports detailing areas at risk of subsidence and flooding. This East gallery represents Time of Change, we are told by the introductory panel, which describes the Great Freeze of 2071 and the devastating fires in Sherwood Forest of 2068. But the possibility of hope is flagged up too – Nottingham, aka the Silver City’s historic textile industry, will be revived, albeit using different dying technologies (which we learn more about in Gallery 2). The gallery is startlingly bright and bleakly furnished with large, MDF display stands hosting a variety of work – much of it film - all exploring issues of survival and disaster. However futuristic the overall narrative, the work in this room roots us in the early 21st century and the latter part of the 20th, perhaps to flag up where it ‘all went wrong’. I am drawn to a drooping blue jersey cotton bodysuit pinned to a matching blue board, like a giant baby-grow but with a face (Ciel by Nicola L C 1976). Whatever hazards that was designed to counteract, it can’t have been terribly successful. 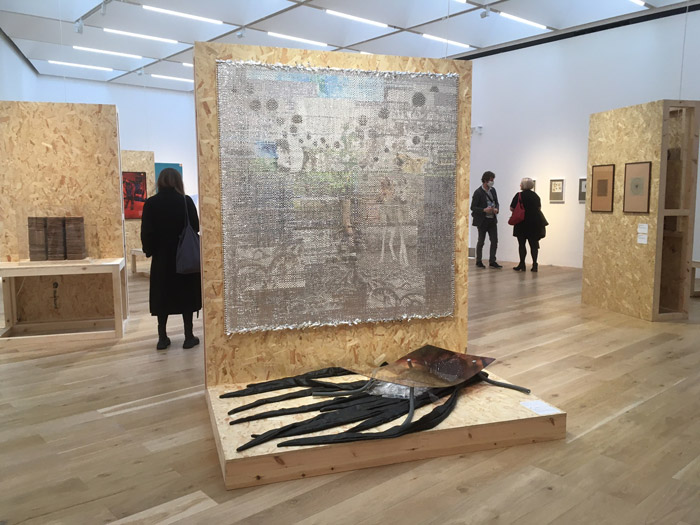 The adjacent South Gallery, a ‘Time to Understand,’ is curated by Condorelli. Here, the introductory panel tells us: ‘The traces of ancient life forms share space with experiments in colour and reinvented materials.’ Organic forms – seemingly in microscopic close-up – swirl across the walls on bespoke wallpaper, on ceiling-height fabric partitions, and fabric swagged across a sort of scaffolding framework, which ends in a platform of assorted oddities: frozen goldfish, concrete radios, fossils and a video showing ink spilling out of an antique printer, whose soundtrack of analogue synthesised noises and bursts of harmonium accompanies us around the room.

It’s an atmospheric installation that reimagines the laboratory of tomorrow as something quasi-mystical and yet somewhat puzzling.

More overtly accessible, Gallery 3 is a charismatic blend of local history museum and temple. Representing points West, and ‘Time for Inner Knowledge’, its curator/ creator Ndiritu draws exhibits from the ancient and recent past, including some compelling artefacts from the archives of Nottingham City Museum.

Set within a sprawling wooden structure, exhibits are grouped on warm-toned, wooden display stands in intriguing combinations: a lush, green, graphic tapestry by Armando D Cosmos, Tuareg (2021), hangs above two items of C18th, anonymous Saltglazed stoneware – a Bear Jug and a Loving Cup of 1770. The selection embraces the weird and wonderful, including some Annie Albers prints, several vibrant collages, textiles and weavings, a large, hairy totem, and even a couple of delicate houseplants in crocheted baskets. The mood in the room is calm, contemplative, conversational, with a strong emphasis on enduring human values, skills and needs – the most powerful of all being for community.

The exhibition leaflet neatly summarises the show’s fundamental premise: ‘How might art envision, prototype and practice new ways of being in the uncertain future…Where are we going and how might we get there?’ I am hoping this will set the tone for many more shows where artists help us to imagine a future where resilience, community and creativity triumph in the end.