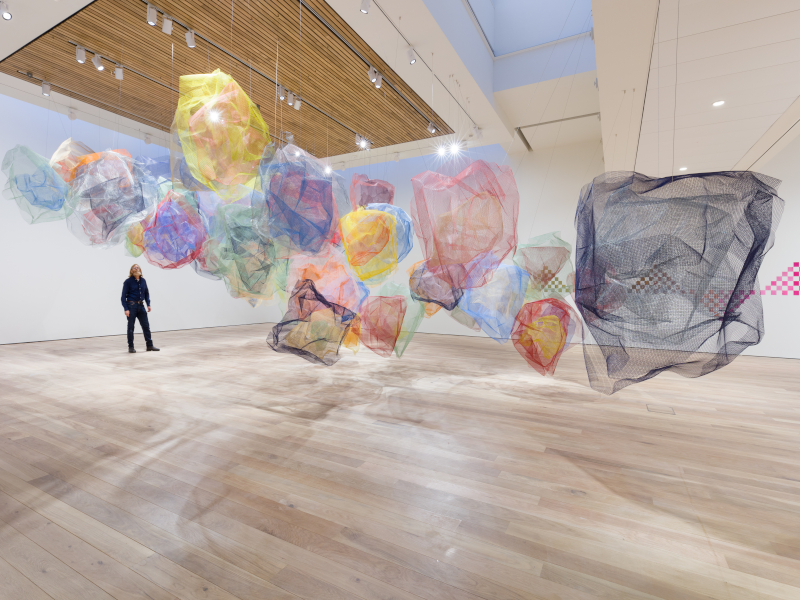 EARLIER IN THE SPRING, I saw a most life-affirming celebration of colour and light, art and architecture in the marriage of artist Rana Begum’s latest body of work with the opulent Georgian gorgeousness of Sir John Soane’s country home, Pitzhanger Manor and Gallery (the show continues through to September, so I would strongly urge a visit).

Soane’s West London retreat, and the contemporary gallery that sits next to it, reveal that even the humblest of materials – Begum’s range from industrial fishing nets, through steel mesh to plastic reflectors – can be every bit as spectacular as his expensive finishes and fittings. Faux marble walls and stained glass skylights are all very well, but clouds of powder-coated steel, or even simple water colour patterns on gridded paper can trigger a whole new relationship to the chromatic spectrum when deployed with Begum’s playfulness and skill.

Having seen the show both at Pitzhanger and in its previous setting of Warwick University’s Mead Gallery – now wonderfully re-furbished and re-imagined by Ellis Williams Architects – the pieces there were just as striking, if in a different way. But it was all the more remarkable how good they looked in Soane’s dazzlingly colourful and embellished spaces, given they were actually designed for the Mead’s new white, top-lit galleries. A sculptor with a strong sense of architecture, landscape, light and colour really can transcend any space, I realised – which piqued my interest in how Begum will wield her curatorial input to the architecture section of this year’s Royal Academy summer show, which she is co-curating with architect Niall McLaughlin.

The summer show – which allows ‘amateur’ fine artists to show work alongside revered professionals – has lately been a real cornucopia of visual delights, especially when curated with an eye that is blind to gender and country of origin (hooray for the female-friendly, post-colonial hang). But the architecture section usually pales in comparison. Not least because what artists are showing is their fully realised idea, where the architects have to rely on drawings and models and your imagination has to fill in the rest.

So will Begum be transforming the architecture presentation with her rich material sensibility? In a conversation with her at the Pitzhanger opening in late March, she indicates as much – though the primary consideration in selecting and displaying the projects is the theme of this year’s show: climate, in all its manifestations. Begum and McLaughlin agreed that, ‘Previously, what we’ve felt has been missing from the exhibition, with architecture in particular, is really this approach to material and how we actually need to shift attitudes now. Architects are in a position to make those changes and have an impact on the environment, because they’re the ones that recommend materials to the clients.’ 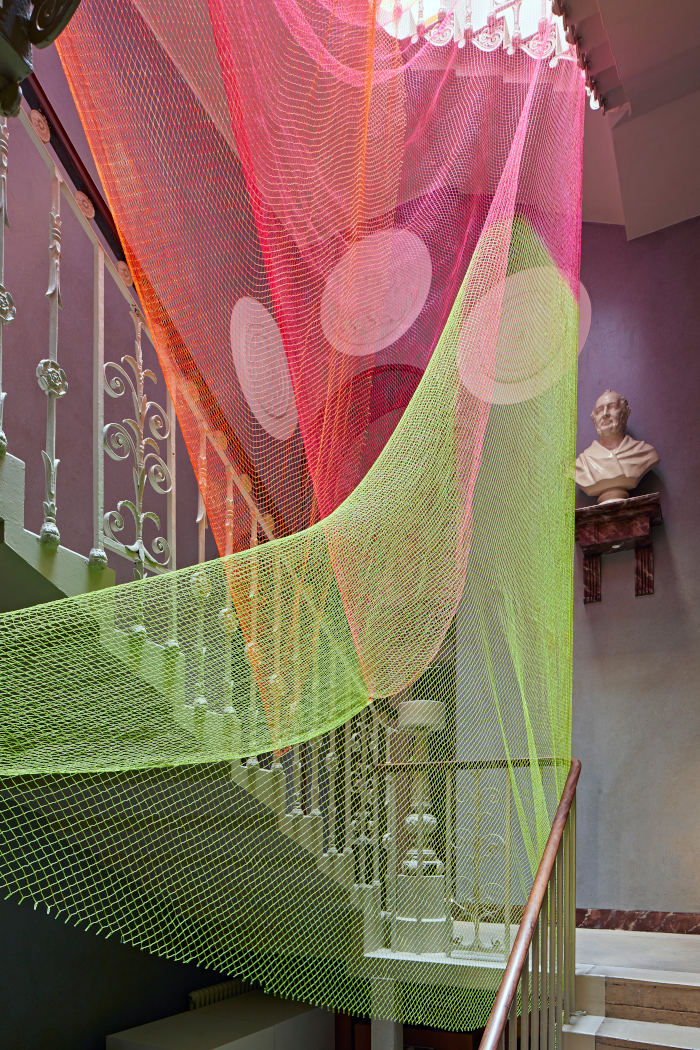 Installation view of ‘Rana Begum: Dappled Light’ exhibit that still manages to stand out even within the embellished spaces of the Pitzhanger Manor and Gallery. Image Credit: ANDY STAGG

Begum has previously collaborated with Bangladeshi architect Marina Tabassum (in a delicious, top-lit, patterned ‘light well’ shown at the Whitechapel Gallery, and also at the Rem Koolhaas/OMA designed Concrete gallery in Dubai). Begum – who was born in Bangladesh and moved to the UK at the age of eight – was particularly inspired by Tabassum’s approach, and the growing body of work from architects in regions most severely affected by climate change, which examines how flooding, extreme climate events and other issues call for a more portable, transportable and re-usable approach to materials and the building of homes. ‘We’re taking that as our core idea. It’s also about using local materials. Marina is really insisting that nothing is getting shipped over from afar.’ Timber and stone are likely to feature heavily, celebrated for their local, tactile, contextual qualities and new approaches to their engineering.

Begum is also interested in architects demonstrating a more fluid, multi-disciplinary approach. She says: ‘I’ve worked with various architects now and it’s always interesting how each architect has an approach, even in terms of engineering. For Niall and I, we’re looking at this boundary-less approach: there is a lot more overlap between different disciplines, inspired by the freedom that artists have, in […] pushing some of the limits.’

Expanding out from the usual established big name practices was also intriguing to Begum. ‘When we went though the selections we were keen to make sure younger voices were represented.’ Projects that foreground social issues as well as environmental can be expected.

Begum herself has had the unusual experience of commissioning and living in an architect-designed space: Peter Culley of Spatial Affairs Bureau created for her a unique home and studio, set behind a cemetery in North East London. A complex site and structure, it took ten years to complete. Huge ingenuity was required for bringing daylight in through various apertures, courtyards and rooflights, as planning issues meant that only one elevation was permitted a window – one with a view into the neighbouring cemetery. ‘I really wanted to feel like I was living amongst the trees,’ says Begum. That view is captured beautifully on a film Begum is showing at Pitzhanger, a compilation of photos taken every daylight hour over the course of 2021, showing the subtle and changing patterns of leaf, light and branches.

Lit largely from above, however, and with only the trees as visible neighbours, her whole relationship to light changed. ‘I felt incredibly sensitive to light and the impact it has on ones mind and body. I think that’s why the works – especially the new projects that are coming up – [have] become more and more sensitive to light. And the role that the materials have is about heightening those senses – exploring that balance between the visual impact and the way you experience it. And I think that’s my next thing.’ With this and some other large public commissions in the US in the offing, no wonder Begum says: ‘I’m quite excited about the way the work is going.’ I think we are all with her on that.