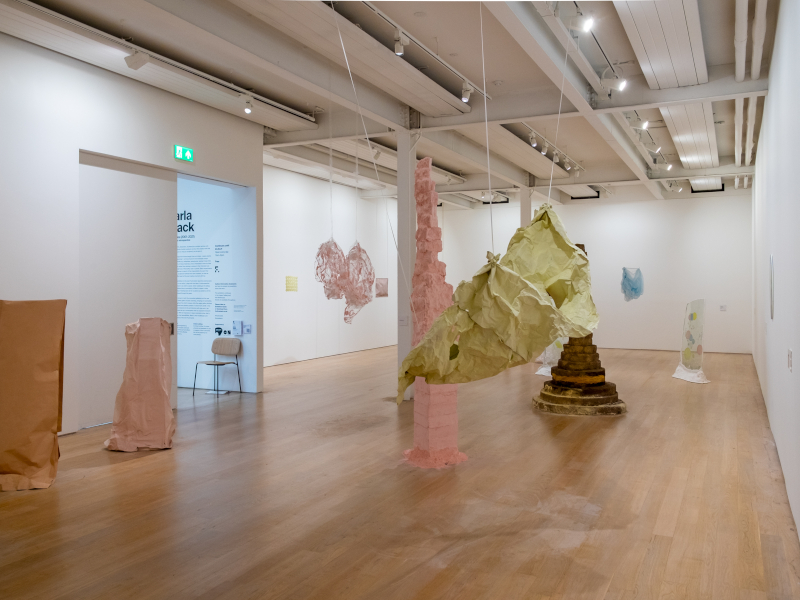 THE FRUITMARKET is one of Edinburgh’s best loved cultural landmarks. Adapted from a fruit and vegetable warehouse adjacent to Waverley Station originally built in 1938, the gallery has showcased contemporary art since 1974. Its simple, white cube presentation on Market Street, refurbished in 1994 by Richard Murphy Architects and costing around £350,000 in total, helped to further boost its audiences and reputation. But by 2003 it had outgrown that space and director Fiona Bradley was recruited from London’s Hayward Gallery to mastermind the funding and design of a significant expansion. Nearly 20 years later, she is now presiding over a gallery that has doubled in size and grown even more in potential.

That lengthy gestation implies a chequered history: indeed, an earlier, more ambitious £11m scheme by Gareth Hoskins Architects had to be aborted, in part due to withdrawal of HLF funding. But in the interim, an opportunity emerged to buy its next door neighbour – an older warehouse, with its original structure almost entirely intact, despite housing various nightclubs and karaoke bars over the decades. And now the white spaces of the original gallery (albeit significantly but subtly refreshed) are complemented by a new, gritty, double-height gallery, all thanks to Edinburgh architects Reiach & Hall’s ingenuity. With sustainability and adaptability at the heart of the project, the new ‘warehouse’ space is a multi-functional companion to the original gallery, operating as part of a show or separately as an event space for music, spoken word, theatre or dance. The expansion substantially enriches the Fruitmarket’s cultural offering – and, most importantly, its economic viability in a landscape of dwindling or non-existent funding. And, at just under £4m, it cost just a fraction of the previous proposal.

Over the past two decades, commissioners and architects of so many cultural buildings seem to feel that they need to outshine the art destined for their interiors with structural gymnastics or material dazzle, so it is great to see an upgrade that celebrates the old while delivering something genuinely new in terms of texture as well as offer. 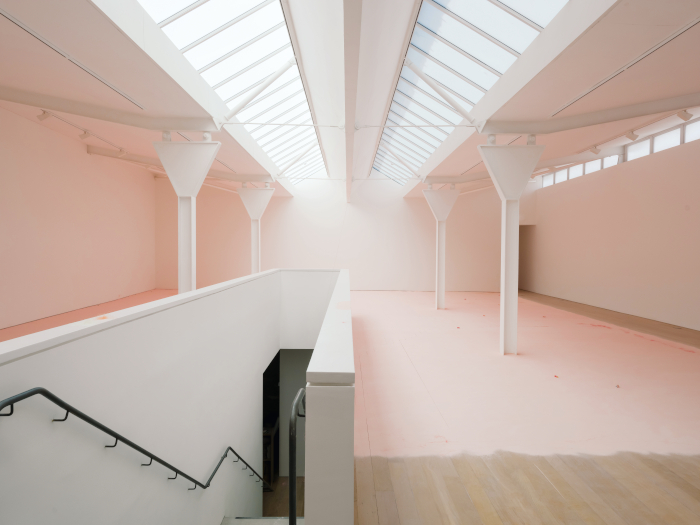 And the satisfaction from both client and architect was clearly evident when I met both Bradley and Neil Gillespie, Reiach & Hall’s director and chairman, in early summer, prior to the new space’s opening. Gillespie, it turns out, had sketched out a scheme not dissimilar to the current one on the back of a napkin when the first competition was launched and his practice lost out to Hoskins. So it must be particularly gratifying now for the pair of them to feel that the more modest, but no less transformational, scheme has landed in the right way, at the right time, for the right budget.

Bradley is excited to see what artists might conjure in each space. And the opening exhibition by Glaswegian artist Karla Black, which run from July–October 2021, set the bar high: pastel pink powder spills and sugar paper sculptures glimmer against the white walls of the refurbished original, while against the industrial textures of the warehouse gallery Black has piled mounds of earth and gold leaf on its pale concrete floor, illuminated by fingers of light penetrating the wooden slatted screens that separate this room from the daylit lobby beyond. With its exposed steel frame and massive metal truss painted an oily black, the warehouse gallery offers Edinburgh its first properly modern, industrial-style art space. Gillespie says: ‘I like that there’s these two very different worlds, the dark one and the light.’ Bradley adds: ‘This is the Fruitmarket’s dark twin…It allows artists to work in a different way.’

Yet, from the outside, you would never know how radical the overhaul of these buildings has been. The whole of Market Street sits on a bridge. As Gillespie explains: ‘It’s all founded on a big steel truss that holds the whole thing together above a huge void.’ This made the building works even more difficult to plan and execute while avoiding disruption to station services, especially given the slope from one end of the two structures to the other creates a level difference of 80cm.

Reiach & Hall downplayed the changes in level by running a gently sloping interior ramp along the whole of the lobby. This concrete ramp, and the new concrete stairs, give the building a real sense of weight. ‘There’s a solidity about this thing that is actually floating in the air, which I really enjoy,’ says Gillespie. The huge windows that sit between pavement and ramp give the Fruitmarket a new visibility and presence on the street – without the need for flashy entrance porticos or dramatic atria – which Bradley particularly likes: ‘The original Fruitmarket building always was ridiculously long. Now it’s epically long. But the fact that Neil’s ramp walks you along the pavement I think is really clever and will make people come in without perhaps even noticing that they have walked into an art gallery.’ 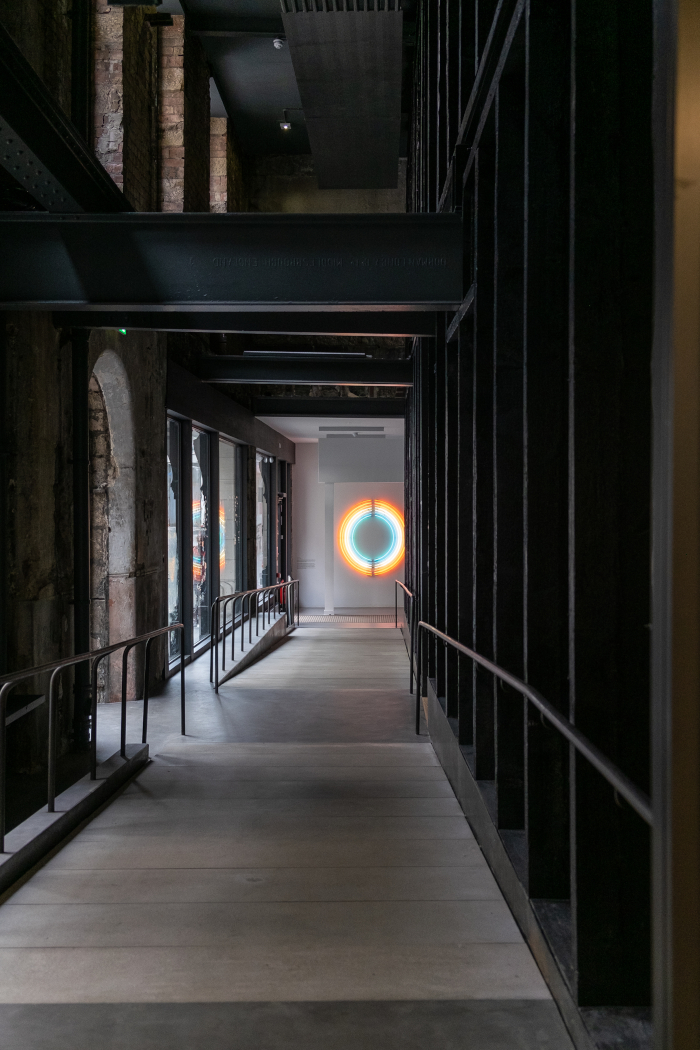 While the warehouse-style gallery on the left has its own entrance, the main entrance point serving both galleries is situated centrally, bringing visitors in to the expanded cafe space, with new state-of-the-art kitchens now equipped for all manner of catering events, and a much larger shop to better serve what Bradley calls ‘the best art book shop in Scotland’. The refreshed white cube spaces are still on two floors, connected by generous new concrete staircase and lift, with new education and workshop rooms tucked away on the first floor, in the between spaces claimed by conjoining the structures. Above and behind the double height warehouse gallery are new offices and meeting rooms. A lack of toilets in the old building was a regular complaint. But now both gallery spaces are generously provisioned.

Bradley sings Gillespie’s praises as an architect who understands what the art needs. ‘Architects who are good at building for art are quite rare, because artists make their own world anyway. They need thresholds and corners to play with. The building doesn’t need to move you through the space, the art will do that… This building reflects the kind of curator I am: my belief is: you’re the midwife, you’re not having the baby. The same is true maybe for buildings for art. It’s not all about you, but about providing the framework for a conversation.’

It is a sad trope of architectural journalism – especially over the past few years – that the projects that receive the most attention are often mega-budget statement structures, manspreading their way across the public realm, as if the bigger or more attention-grabbing the building, the better. In the current climate, the Fruitmarket surely epitomises the kind of quiet but transformational project which we need, helping to keep its client both financially viable and desirable. Let’s have more like this.