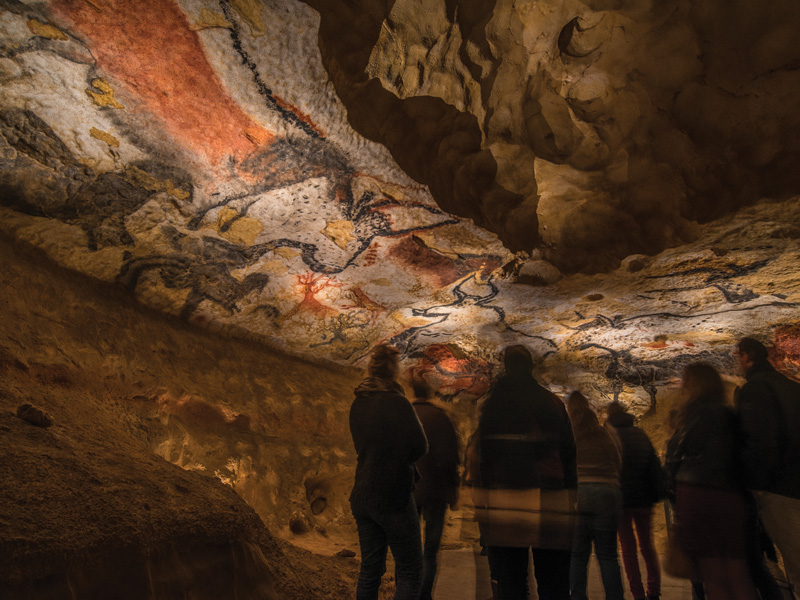 Veronica Simpson gets to see the prehistoric drawings of the Lascaux caves, thanks to the skillful and artistic collaboration between Snøhetta and Casson Mann that is Lascaux IV

The Palaeolithic paintings of the caves of Lascaux – and others like them in France and southern Spain – are among the world’s great wonders, providing evidence of human consciousness and supreme artistry dating back 20,000 to 35,000 years ago.

So, I was in a state of high excitement when I first heard about Norwegian architecture practice Snøhetta’s new visitor centre and museum Lascaux IV: Centre International de L’Art Parietal, in Montignac. But I had not realised that the original cave and its astonishing paintings would not be part of this experience. In fact, those paintings have not been visited by the general public since 1963, as the humidity generated by thousands of visitors was destroying them.

What the building would contain would be a simulation of the cave, and interpretation around its contents, provided by UK consultancy Casson Mann. Now, the word simulation carries a particularly negative resonance in exhibition design, redolent of the awful visitor centres of the Eighties and Nineties: fibreglass tableaux, reeking of disinfectant, complete with crouching waxwork figures clad in loin cloths and sporting hairy wigs. But this is not that kind of museum, and thankfully light years away from that kind of simulation. In fact, due to the fragility of the originals, replicas have long been an accepted means of encountering cave art in this region, from the creation in 1983 of Lascaux II – a partial version of the cave, buried just 200 yards from the original, which, until its closure last year, had been visited by tens of millions – to the travelling exhibition generated in 2012, showing sections of the cave reproduced from advanced 3D and digital scanning techniques.

But the reality, I am happy to report, exceeds expectations, thanks to the quality of Snøhetta’s extraordinary building, which glides into the hillside with as much grace and self-effacement as a monumental building of this scale can muster, and to the really intelligent and sensitive interpretation and scenography by Casson Mann. Unusually, Casson Mann led the building’s programming, designing it around the visitor experience – possibly the first time ever that exhibition designers have been allowed to direct architects. The reason for this was that Snøhetta signed up to bid with it for the competition just as Norway’s annual holiday (July through August) began, so Casson Mann had two months to develop its ideas around the visitor journey, to which Snøhetta responded with a typically unorthodox, but uplifting and coherent structure.

There were two vital elements that Casson Mann’s founder and creative director Roger Mann wanted to ensure for visitors. One was to incorporate the best elements of Lascaux II, namely to create a sense of connection with the landscape, and the story of the cave’s discovery, coupled with a physically authentic cave interior. The other was a sense of intimacy, which he knew could be threatened by the large numbers of visitors – 4,000 a day at peak summer times – planned for the new museum.

Says Mann: ‘The only way to do it was to put people into small groups of no more than 30 and pulse them through, and when they’re in there, keep them in the group and dim the lights either side of the group, so you feel like you’re in a pool of light with your guide; that’s about as intimate as it’s going to get.’

And this is indeed what happens: after entering the building’s light-filled lobby, we meet our guide and head into a lift and head up on top of the building, to an open, ‘belvedere’ platform where we see the landscape and learn about its prehistoric climate, flora and fauna.

We then view a short film about the cave’s discovery by a group of local teenagers with their dog (which followed a rabbit down a hole that led into the cave) in 1940. We are then led back into the open, down a high-walled walkway leading below ground level to the cave entrance. Here, in a chilly, dark, utterly cave-like space, we experience this astonishing art, moving through the sections, each with its own distinctive organic architecture, as the original, awe-struck teenagers must have.

Although we know that we are in a replica, it is reproduced with such sensitivity and accuracy, with close control over temperature, acoustics, lighting and humidity, that the required spell is cast and held. And luckily, up close and in that environment, the art (even if reproduced) is itself spectacular. The new building lies low in the landscape, with much below ground

As we exit the cave, we find ourselves in the open air again, in a high-walled courtyard – ‘Cave Garden’ – where we pause, to allow for ‘contemplation and recovery’, as Snøhetta co-founder Kjetil Thorsen says. And then we are back in the semi-dark, in the ‘Atelier de Lascaux’, a high-ceiling gallery as dramatic in its own way as the caves themselves: cross sections of the cave are hung from thin metal poles that simulate the calcite stalactites of the original. Now, we have time to look and learn more about the cave structure and how the paintings were made, assisted by our own ‘Companion de Visite’ (CdV) tablet.

Atelier de Lascaux leads into the main spine of the building – a vast, top-lit hallway, which evokes the atmosphere of a temple more than a museum. Three further exhibition rooms lie to the right: a film ‘theatre’, exploring the theories and controversies around Paleolithic art; a cinema where a 3D film ponders on the links between us and prehistoric ancestors; and a gallery which looks at how prehistoric paintings may have influenced modern art.

Authenticity is a strange thing to bring up where simulations are concerned, but by making clear what is simulated and what isn’t, and providing as true-to-life a recreation of the cave journey as possible, it works. And the building itself enhances that narrative and mystery. The secret, says Thorsen, is in the simplicity and unity of materials and that ‘the building is not trying to compete with the cave in any way’.

Clearly, both teams know they have created something special. Thorsen hopes that what they have done is create a new artefact with its own integrity. Rather than just copy the original ‘there is an alternative: to relate to the artefacts not of the existing cave, but the cave we are visiting right now, he says. ‘Because we have been in a wonderful art piece, right?’ Indeed we have.