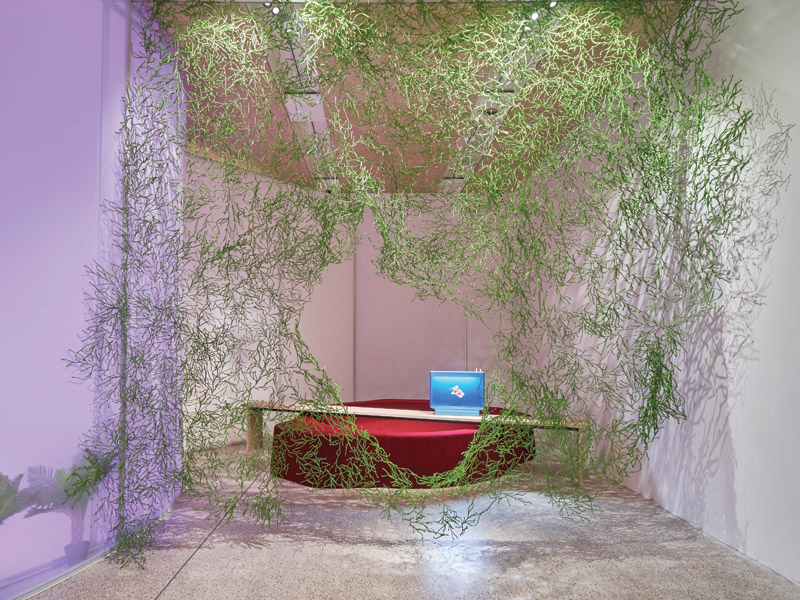 Veronica Simpson casts a critical eye over the newly relocated Design Museum, and finds it pleasing

When London’s Design Museum opened its new, vastly bigger space in late 2016, in Kensington, I was not initially a fan. The cavernous elegance of John Pawson’s overscaled, oak-lined atrium became the dominant experience, with its admittedly handsome, inhabitable staircase. Where was the much-anticipated expanded exhibition space – the justification for this £83m relocation from its original Tower Bridge site? Hidden away behind these stairs, the galleries seemed to be subordinate in the visual and cultural hierarchy to food and retail.

But it takes time to inhabit a building, to learn how to use all its nooks and crannies to best advantage. A recent visit to the opening of the new Home Futures exhibition was far more encouraging.

Home Futures focuses on how ideas about the way we would be living in the age of technology have evolved since the Twenties. As is often the case, what we got wrong was as illuminating as what we got right. Take Ugo La Pietra’s Telematic House, first shown at the Milan Furniture Fair in 1983. He figured that access to screens would be central to our homes and lives – too right. But where he embedded them in our furniture, today we carry them everywhere with us.

Some wonderful artefacts have been dug out of various archives for this show by curator Eszter Steierhoffer (together with Justin McGuirk): for example, a hilarious photo of three young men wearing an assortment of helmets that would alter one’s perception of the world. Environment Transformers: Fly Head View Atomiser (1968) was a satirical proposal by Austrian studio Haus-Rucker-Co, but it predates/predicts Google Glass and the escalating interest in VR. The work of pioneering architecture studio Archigram pops up, of course, with a large, colourful print of Ron Herron’s Cities: Moving (1964). This bizarre, mega-tank meets pig, with its barrel shape and fat robotic legs, luckily never came to pass. Alison and Peter Smithson's House of the Future (1956/2003) is also a highlight, revealing not just the role of increased mechanisation in the home but also the impact of our infatuation with space travel on domestic aesthetics. There is some wonderful whimsy and satire (a quality more exhibitions should explore) with Heath Robinson’s drawings of gadgets that make domestic life more complicated than it needs to be. The same theme is satirised in Buster Keaton’s The Scarecrow, shown here, along with iconic Sixties’ American animation, The Jetsons, set in 2062. Plus a hilarious clip from Mon Oncle, a 1958 film by Jacques Tati, which shows humans co-habiting with self-operating vacuum cleaners and pedal-powered lawn mowers. It is screened alongside a model of the futuristic house he created for the film – Villa Arpel – designed with the help of Jacques Lagrange.

An idea that has had its peaks and troughs throughout the past century is that increased mechanisation and mobility would lead to far smaller, more multifunctional living units. There are some corresponding modular furniture prototypes from Ettore Sottsass and Joe Columbo. Colombo’s Mini Kitchen (1963) is like a chef-ready Swiss Army knife, designed to support Colombo’s proposal that no single room had to be designated as the kitchen, as this could be wheeled into any part of the house. I was surprised to learn that it is still in production, thanks to Italian brand Boffi. Gary Chang also made his speculations come true, adapting his family apartment in Hong Kong into ‘Transformer Apartment’ (the film of which is shown here), which allows for 24 room layouts within a tight 32 sq m of space. There is a full-scale prototype of one of Haus-Rucker-Co’s inflatable living pods, air-conditioned, portable bubbles that propose doing away with architecture altogether. Who knows, we may need these yet.

And plenty of space is given over to contemporary, speculative, artistic responses, too: Studio Makkink & Bey’s 2002 Linen Chest House is an enchanting linen cabinet transformed into a cosy four-poster bed, draped with lace and roofed in blankets. And Ronan & Erwan Bouroullec’s poetic sensibility enriches the mix with an amorphous red sofa which emulates a lake, a TV that is also a vase, and Algae, a modular system of seaweed-like components that can be configured to become a screen, a room divider or a canopy. Come the apocalypse, however, we will all be downloading Belgian studio OpenStructures’ open-source prototypes for self-assembly furniture and gadgets. Alison and Peter Smithson, House of the Future (1958)

Browsing the building afterwards, I was delighted to come across a temporary, mezzanine level exhibition of architect Peter Barber’s recent thoughtful housing projects, all of them inspired by previous housing typologies, from almshouses to courtyard houses; if the model ain’t broke, don’t mess with it. Meanwhile downstairs, in the basement galleries, 2018’s Beazley Designs of the Year revealed some 80 truly mind-blowing schemes, from fashion to architecture. They showed how brilliantly our brightest and most ingenious brains are using design and technology to solve today’s most pressing problems, from ocean plastic pollution (Trash Isles by Plastic Oceans Foundation) to state surveillance abuses (Forensic Architecture); apologies to those of you reading this magazine now, as Designs of the Year closed in January, but it was a truly outstanding selection. I can’t wait to see what is lined up for 2019’s offering.

At last it felt like here was an institution that had fully found its purpose: to interrogate how design affects the way we live now – for better or worse.