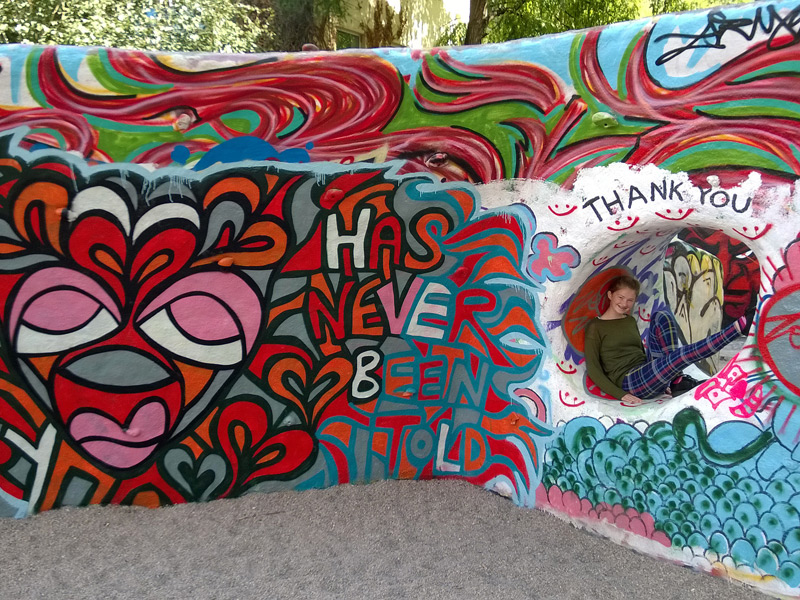 Cheap rents have long made Berlin a haven for creatives. But the benefits are writ large in the design and construction of a vibrant visual and civic landscape. Let’s sing the praises of slow regeneration.

I have recently returned from a trip to Berlin, one of the most generous, visually interesting and expressive cities I have had the pleasure to explore.

The reasons for its hugely engaging qualities are economic and infrastructural, as well as cultural, but they seem to me to spell out a valuable lesson in the merits of 'slow regeneration' - a developer's version of the 'slow food' movement that should perhaps be patented and promoted in the interests of socially and culturally supportive communities.

Due to the massive cost of reunification, there was very little investment in the city after the Berlin Wall fell in 1989, apart from the refurbishment of the Reichstag, the construction of some sleek and sophisticated new government buildings and a rush of corporate HQs and flagships that sprang up in the city centre. This has meant that architects, designers, artists, innovators and entrepreneurs of every hue have flourished in the abandoned Soviet-era housing, the derelict dockyards, factories and former power stations.

A lack of development, particularly in East Berlin, both before and after reunification, also means that the city's history in this area - the bullet holes and economic neglect - are still evident in buildings, giving a glorious patina of age and experience. It wears its scars seemingly with pride, while the graffiti that sprawl over almost every building, wall and lamp post give expression to its citizen's inner conflicts. In the past decade, new and shiny buildings - both smartly modernist and sculptural and quirky - are cropping up with increasing frequency and slotting happily into this diverse cityscape. It's an 'access all areas' aesthetic that Berlin communicates. Nothing says welcome to a stranger (or a resident) better than the frequent appearance of places to sit and rest. You cannot walk more than two blocks without finding an appealing communal space, whether a teens' adventure playground, an outdoor climbing wall, or just a leafy grove between apartment blocks.

Twenty-five years after reunification, the city still bristles with abandoned and derelict factories. Some have been transformed into high-ceilinged and spacious studios for design, manufacturing and retail start-ups. Others are colonised as campsite communes, while some are being reinvented as places for leisure and pleasure. I was blown away by the quality of crafts, fashion and art, as well as gourmet-food street stalls at the Neuehaimat, a former tram depot that, this summer, became a twiceweekly night market. I was equally thrilled with the Badeschiff, a handsome swimming pool created out of an old flatbed barge now in the docking area of a former warehouse complex by the River Spree. There's a sense of this city making it up as it goes along. That means it's sometimes a little rough around the edges. To get to the Neuehaimat I picked our way through a long and unlit stretch of abandoned goods yard, stumbling over tram lines, weeds and rubble, passing sheds that have already been claimed as climbing walls or skateboarding parks. It's a city that favours the intrepid and the optimistic.

But the thing that really makes this city feel like a giant playground designed to encourage exploration is the transport system - not just the massive and hugely efficient network of trams, trains and buses, but that you can buy a travelcard for the entire network for just a few euros and then travel all day without having to cross a single barrier. The system seems to be run on trust. There are ticket inspectors who crop up from time to time (I encountered only one during my four-day trip), but everybody seems to buy their ticket regardless. The idea of a city being run by bureaucrats who EXPECT good behaviour seems bonkers but kind of wonderful.

Coming from London, where unlicensed entertainment is strictly policed, it was a thrill to discover the unofficial forum for all buskers, just outside Warschauer Strasse station. Here, next to a conveniently placed railway kiosk selling snacks and beer, a whole range of really talented young artists play their hearts out every night to a friendly and appreciative crowd, for free - just opposite the giant corporate presence of Berlin's O2 stadium. Given all this, it's no surprise to find - according to the excellent Berlin Design Guide - that Berlin is home to 33,000 artists (compared to the country's second most creative city, Hamburg, with only 13,000).

It has one of the lowest costs of living, with a 1,000 sq m apartment costing a fraction of what it would cost in Hamburg, Cologne, or Frankfurt and about a tenth of what it would cost in Munich (or London). Its metropolitan area is 14.3 per cent parks and green spaces (compared to Munich's 8.5 per cent) and it has a fairly low population density. Maybe it's this low density that facilitates the sense of relaxation and innovation. Less competition for space means people can afford to be welcoming and friendly - and architects and designers can afford to put their stamp on the environment without bankrupting themselves.

Take, for example, Britta Jürgens and Matthew Griffin, architects who, in refurbishing a small 1890s' apartment block in the Mitte district into their own family house, added on a sleekly modern wing to create the unique Miniloft Apartment hotel. They are currently part of a group of architects and community activists campaigning to preserve the old flower market, and are putting together a bid to develop part of that site into characterful apartments, more Minilofts and office space (see frizz23.com). The aforementioned floating swimming pool in the Spree was organised by Berlin's City Art Project Society, from a concept created by local artist Susanne Lorenz and completed with the help of Spanish architecture practices AMP and Gil Wilk. Once a tram depot, the Neuehaimat became a twice-weekly night market during this summer

The benefits when artists and creatives have a role in the look and feel of a city are undeniable, albeit hard to quantify. The benefits when ordinary civilians are involved can be even more profound. For example, when the area around the former airport Tempelhof was in danger of being snapped up by commercial developers for private housing, Berliners were asked to vote on whether they accepted that fate for this iconic Twenties structure and its surrounding green space - which had already been claimed by urban gardeners and kite surfers. Around 70 per cent voted no. Architects, developers and community activists have been given five years to come up with something better.

Could anyone imagine that happening in the UK - a lucrative private planning development being put to the civic vote? The Berlin Design Guide authors say that what makes this kind of thing possible in Berlin is 'The desire to do things differently. Berlin's creators, designers, architects and artists look back upon a tradition that...has always worked to reinvent and re-imagine the status quo.'

Would that all cities were blessed with such courage and vision. But it's easy to be bold when the stakes are low. As Berlin's property and land prices rise, as they have done recently, the real test for Berlin and its civic custodians' courage and integity will be in how well they resist sacrificing this apparent inclusivity and creativity, in the rush to maximise commercial prosperity.