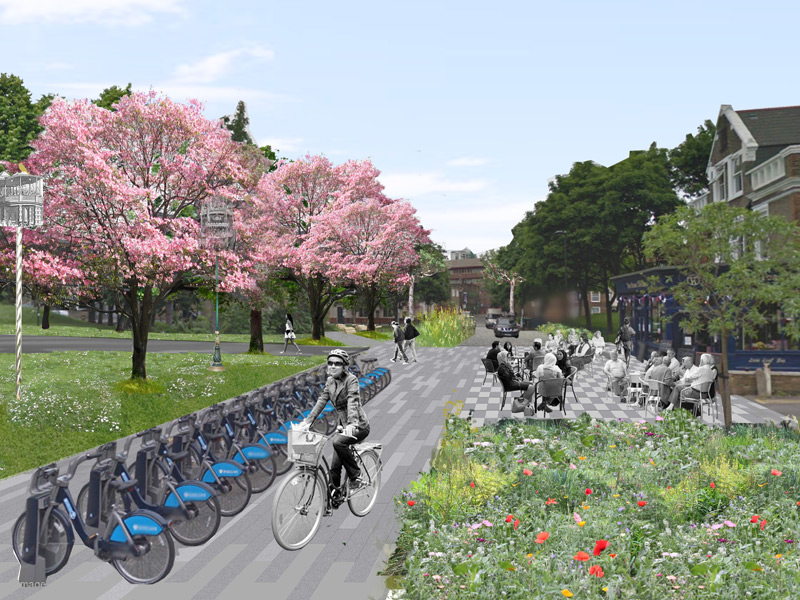 Cities, streets and buildings designed to encourage interaction, engagement and enjoyment are the key to fighting increasing inactivity and ill health. Veronica Simpson reports from an inspiring Design Council summit.

Obesity and inactivity are two of the biggest threats to health in the affluent West, but what can design do to help? A huge amount, according to a Design Council seminar, Active by Design, held in London this autumn. The facts and figures are pretty attention grabbing: Anne Marie Connolly, head of Public Health England, revealed that a fifth of British children start school already overweight, and by year six a third of them are already an unhealthy size, with two thirds of them reaching near obesity levels by the time they reach adulthood. Another shocking fact: 25 per cent of women and 20 per cent of men have less than 30 minutes' physical activity a week - we're talking not even walking to catch the bus or train here, or strolling to the shops or the pub. Most people, it seems, simply take a few steps to their car to head to work or out to play; and that's after they have spent all day sitting at a desk. Mike Loosemore, consultant on sport and exercise for the NHS, showed some pretty horrifying bar charts on rising ill health, with low fitness being a greater contributory factor in poor health than either smoking or diabetes. Carrying on as we are, he said, 'is going to add an extra £17bn to the NHS bill over the next 20 years.' So something has to be done, and done pretty fast. But what's the solution? Designing better workplaces is one area many architects and interior designers could contribute massively to, with buildings that encourage promenading, movement and congregation; staircases placed in prominent positions to discourage the use of lifts or escalators. Visionary employers go the extra mile, according to Simon Allford, partner at Allford Hall Monaghan Morris. He revealed images of the practice's proposed Google London HQ, which will have its own staff swimming pool as well as a running track around one of its upper floors. This building is designed to promote walking - it's an eight-minute walk from end to end, apparently. Allford said: 'People should be encouraged to treat a building as a city, a social engagement space.' In the city itself, activity is made easier if schools, housing, offices and shops are clustered, said Allford. Riccardo Marini, director of the legendary Danish placemaking and public space practice Gehl Architects, went further, blaming masterplans based on the 'space and efficiency' model for many of the evils visited on neighbourhoods - and waistlines - today. He berated architects for drawing up street plans that consider cars, public transport, and the usual ratio of commercial, residential and retail buildings, but pay almost no attention to people. He said: 'To have an understanding of how people use a space is crucial before you start designing. Understand life, people, place. Buildings come last.'

Lucy Saunders, who is a public health consultant for Transport for London, revealed some fairly simple, though rudimentary, improvements that would transform the normal streetscape to encourage greater interactivity. 'It's not about infrastructure for exercise,' she said. 'It's not about placing cycle tracks over the top of railway lines. It's about holistic streets: places people want to go to and be with friends and neighbours...

If there's shade and shelter, places to stop and sit if you need to, somewhere people can choose to walk or to cycle, then you've solved most of the problems.' Thinking about how buildings meet the streets, to offer more open and inviting shop fronts, brings a more lively and engaging atmosphere, with natural surveillance. Even in ordinary streetscapes there's room for manoeuvre, as John Allison demonstrated. Intereactive art work, such as DrMM's Endless Stairs, gets viewers exercising while admiring.

After a career in the army, Allison has taken his interest in sport and fitness, and his experience in making the most of what's around him, and turned it into a kind of guerilla fitness programme called Street Gym. He is now hired by various companies to take their executives out on fitness trails, using the streetscape as his gym. He says: 'As soon as we leave the office door we're basically training. I can take people out for as little as half an hour. We use low walls for box jumps and vaulting. If there are patterns or lights in the floor, we get them squatting down and touching the lights as they run. Steps are great for frog jumps and crab crawls. It's all about using the environment to work the whole body.' Allison is particularly keen to encourage more interactive artworks such as last year's Endless Stair, by architecture practice dRMM - step machine as sculpture.

Better still, however, if you can encourage locals to step up and take the initiative for themselves. The Design Council has been working with three local councils to try and achieve more physically engaging urban spaces - Lambeth, Eastleigh and Bournemouth. Lambeth is achieving some impressive results with a small, £2m neighbourhood enhancement programme, which includes turning a small street market in Herne Hill into a vibrant weekend destination, now managed by the local community, supporting local food-growing initiatives, and developing a 'walk of curiosities', and a green route from Vauxhall to Waterloo to encourage cycling, walking and congregating.

The results of these initiatives are being monitored and written up, to be disseminated early next year to all the relevant parties that dictate the quality of our towns and cities. Rachel Toms, Cabe programme leader in charge of Active by Design, says: 'Joined-up thinking is what it's all about. There has to be collaboration between the public health professionals who are now in every local authority...to work alongside transport planners, architects and developers, to shift their priorities towards a better environment.'

Design Council chief executive John Mathers asked for ideas on how planning culture should change. Allford's response really hit the nail on the head: instead of measuring infrastructure and urban improvements by how much they cost, ask how much value they add. 'We measure dumb things rather than smart things,' he said. 'What we need is to raise aspirations.'