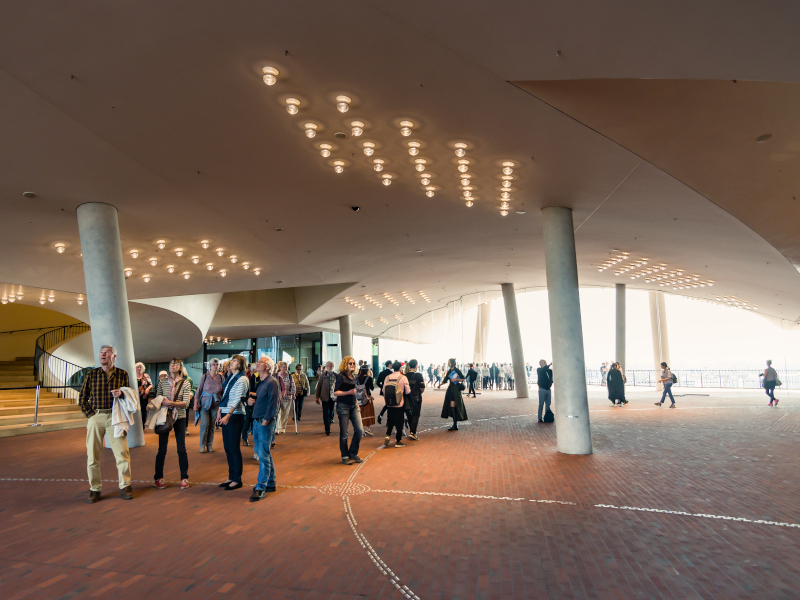 OF THE MANY extraordinary things about the Elbphilharmonie concert hall by Herzog & de Meuron (H&dM) in Hamburg, the fact that it got built at all is perhaps the main one. It started with the dream of a Hamburg developer duo, who spotted the potential in a midrise 1960s redbrick warehouse and its position at the tip of a then-disused promontory within Hamburg’s extensive and still-active docks. It is pertinent here to flag what is different about Hamburg; compared with any other major port city in Europe, the working docks are still close to the city centre, its traffic and clusters of cranes visible from the houses, shops and offices of its residents that front the wide Elbe river. This is what made that prominent spot seem the perfect site to the developers – an arts and music-loving pair, trained as an architect and an art historian – on which to build the city a world-class concert hall. The rationale was both to make up for the relatively modest provision for orchestral music in the city – certainly compared with any other form of music, such as rock, jazz, musical theatre or church music, venues and audiences for which abound in Hamburg – and to create an iconic contemporary emblem for the city, and one that unites its industrial past with a glittering, culturally enriched future (as with the Tate Modern in London). 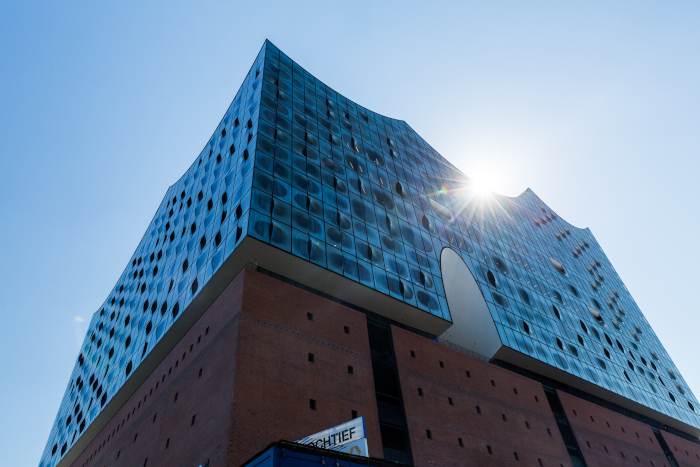 An exterior view of the Elbphilharmonie that cost nearly one billion euros and took 16 years to build. Image Credit: OSCITY / SHUTTERSTOCK.COM

Fortunately for this duo, they were friendly with Tate Modern architects Jacques Herzog and Pierre de Meuron. In December 2001, over dinner, the architects doodled a whimsical, wave-like glass palace on top of this former cocoa and coffee bean warehouse – and the dream was born. With a few luxury apartments and a hotel to draw investment, and the city’s coffers tapped for the performance spaces, new music facilities and some public realm, the couple reckoned construction costs would come to around 95 million euros. They had some work to do to convince the Hamburg authorities and its people – who rejected the proposal first time around – but eventually the idea and the building caught the local and civic imagination with the promise of a cultural beacon at the heart of a new residential area. Two years after that initial sketch, the idea was approved. 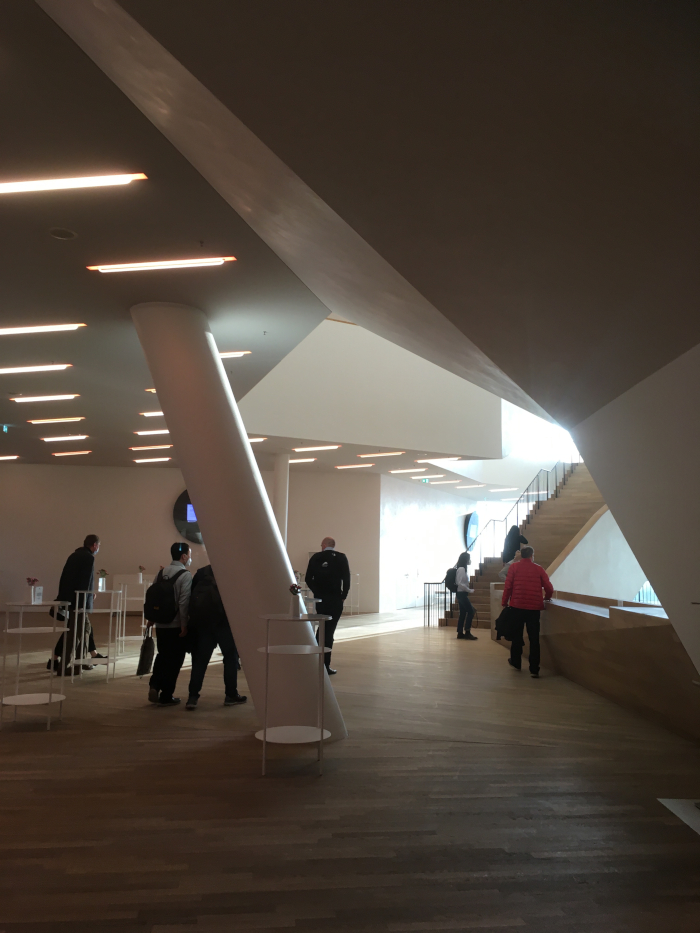 Thirteen years and over 866 million euros later, the Elbphil, as it is colloquially known, is now celebrating its fifth birthday. The remarkable struggle to bring this structure into existence has become part of its myth – it is even celebrated, with budgetary crises to boot, in a commemorative birthday publication. The budget estimates were revised again and again, up to 187 million euros in 2005 and 241 million euros in 2006. By then, the developer couple had dropped out of the picture, and the city of Hamburg was struggling to manage the competing demands of contractors Hochtief and the architects, as well as the unwelcome, expensive surprises this innovative building kept throwing up. First, the original warehouse structure proved to be unequal to the task of taking the weight of the proposed glass palace, so it had to be gutted with only the facades remaining. A whole new interior was constructed – mostly housing car parking – that could take the strain of supporting not just two acoustically isolated concert halls (you cannot have the honking of river traffic interrupting Beethoven’s Fifth, nor the percussion of timpanis disturbing the rest of the occupants of the 44 luxury apartments or the hotel), but also all of that glass. The glass itself apparently took three attempts to get right – its jigsaw puzzle configurations, incorporating those smiling, curved elements (which include small, openable windows for fire safety rather than ventilation), ingeniously assembled by the German firm Joseph Gartner, famous for helping to create the shimmering exteriors of MoMA in New York and BMW World in Munich.

Then there was the shaping and acoustic tuning of the concert halls. H&dM wanted them to emulate the close connection between audience and performers that they have achieved in sports stadiums in Munich and Beijing, or that are achieved via the tiered balconies of La Scala in Milan, as well as the central stage position established to universal acclaim by Hans Scharoun’s pioneering 1963 Berlin Philharmonie. But the unusual resulting structures they devised required unique acoustic responses: for the Grand Hall of 2,100 seats, walls are coated in an extraordinary, dimpled ‘white skin’ of gypsum fibre, which reflects sound in several directions, each tile digitally modeled to exact specifications by legendary acoustician Yasuhisa Toyota; and the smaller, 572-seater Recital Hall, likewise, is coated in a rippling, crafted and contoured skin of French oak designed to give each seat the optimal listening experience. 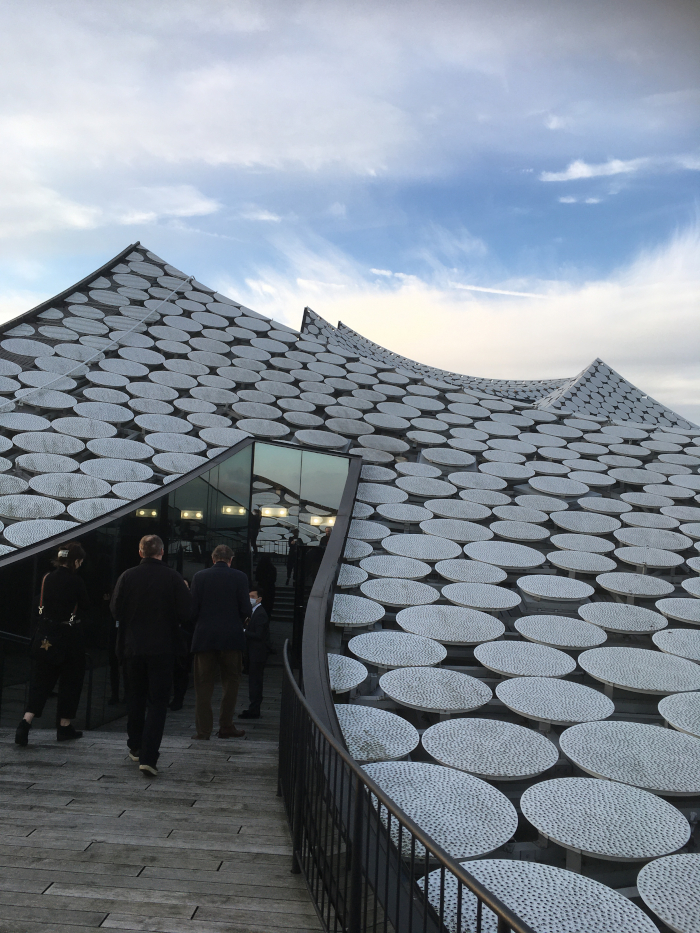 The glass panels enveloping the exterior of the building had to be fit like a jigsaw. Image Credit: VERONICA SIMPSON

With all of the excitement for visitors and audiences on top of the original warehouse, how do you get them up there? There are lifts, of course. However, H&dM envisaged a magical journey through that warehouse block, culminating in the same riverfront vista that used to be enjoyed through the windows of the warehouse canteen. But it is an 80m rise to reach that point from the entrance, and we humans apparently will not step onto escalators that long, so they decided the escalator should be curving, with a ‘false summit’ two-thirds of the way up. The visitor gently ascends through an escalator tunnel of glossy white glass discs embedded in combed concrete, a shimmering, inverted snowscape with shades of Yayoi Kusama, to be deposited, slack-jawed, at that panoramic view. Curving escalators are very expensive. But it works: it is a delight, an adventure, part of the magic of moving through this building. But how hard this building works to deliver these delights. It is almost as if it is working against nature – or against structure or gravity – and certainly against rational thinking. And that is where it falters, as a gesamtkunstwerk (total work of art) for me. Jørn Utzon’s Sydney Opera house, by contrast – for all that its battles to be built and funded are comparable – is experienced as 90% inspiration compared with 10% perspiration. The Elbphilharmonie feels more 60/40 overall.

But was it worth it? The public spaces are mostly glorious interior landscapes, especially in daylight. By night the glittering darkness of the city and riverscape wraps around this translucent skin, and its remarkable outline and texture, set against the river, has helped to create a distinctive icon for the city, used on all its tourism marketing. 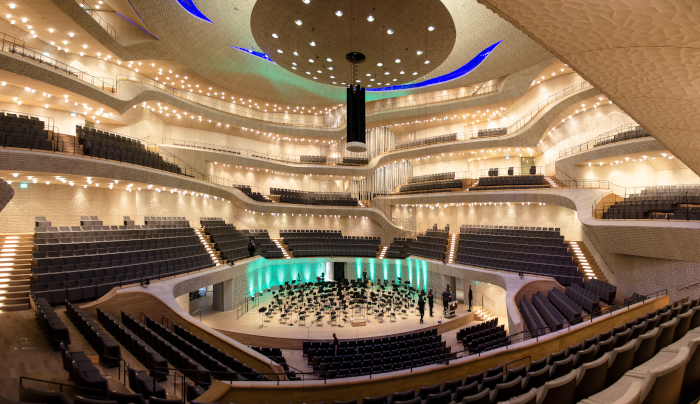 The interior of the large concert hall, renowned for its unique acoustics. Image Credit: YARCHYK / SHUTTERSTOCK.COM

The Elbphil – pandemic notwithstanding – is continuing to work hard to win its place in the affections of Hamburg’s citizens. They conducted 1,000 workshops a year (before Covid-19), aimed at community engagement and enrichment; they have a family orchestra and a youth orchestra with 500 instruments available for children to borrow freely, and multiple choirs. It has staged concerts of all kinds, including rock and jazz. And at the two fifth birthday performances I was lucky enough to attend, the halls were jam-packed with (mask-wearing) Hamburg citizens and visitors, of all ages.

On a tour of the eclectic mix of architectural residences that are evolving along the Elbphil’s harbour arm, my guide told me: ‘People love the Elbphilharmonie, not because of the concert halls but because of the building.’ However, at Hamburg Airport's passport control, the officers who questioned me about my visit (‘two days? That’s a short visit!’) declared that they had heard of it, but had never actually gone there. So, maybe there is still work to do.