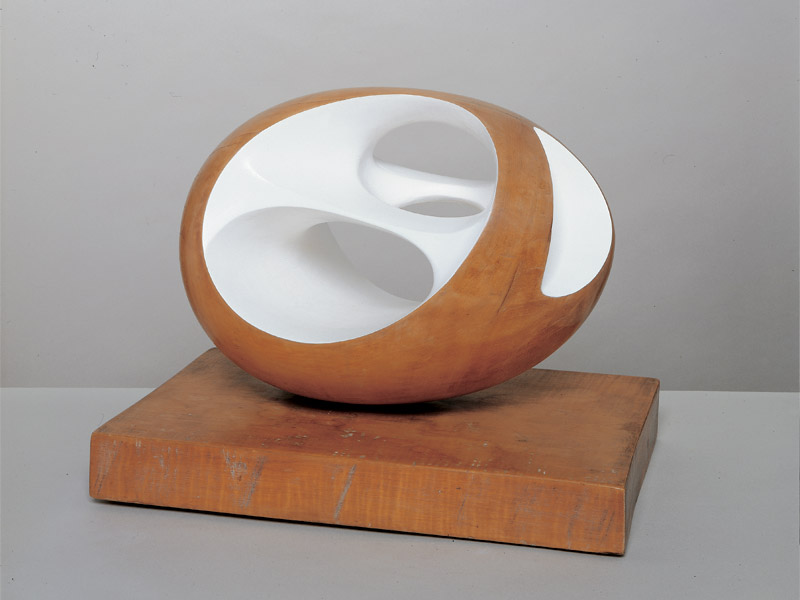 Barbara Hepworth was one of the most significant sculptors of the 20th century, whose inseparable passion for art, the natural world and political activism remain relevant to artists, designers and architects to this day. Eleanor Clayton’s well-researched and richly illustrated book Barbara Hepworth: Art & Life coincides with a major exhibition from 21 May 2021 to 27 February 2022 at The Hepworth Wakefield, where Clayton is curator.

The museum building, stunningly designed by David Chipperfield, overlooks the River Calder in the Yorkshire city of Wakefield. It, and the presence of Hepworth’s Family of Man sculptures in the nearby Yorkshire Sculpture Park, surely inspired Clayton to attempt this long called-for and exhaustive portrayal. Having access to previously unavailable private correspondence, Clayton provides a fascinating account of Hepworth’s yearning to bridge the gap between her art and life by finding harmony, rhythm and balance within materials. Her figurative and abstract sculptures attest to her constant oscillation between the physical and ephemeral, and her desire, like that of Piet Mondrian and Wassily Kandinsky (whom she met in Paris), to express a transcendental reality through abstraction. Deeply influenced by her embodied response to landscape, she worked in stone, wood and metal with equal sensitivity to material and scale. There is an eloquent stillness in her sensuous, biomorphic sculptures, be they single verticals, two forms placed next to each other or ‘closed’ forms of ovals and spheres, which she often pierced to bring light and immaterial space into their solidity.

Born in Wakefield in 1903, Hepworth’s experiences during her childhood in Yorkshire – its rocks and sea, communities and industries – influenced her entire life. Aesthetics and politics were enmeshed in her love of the granite sets, and her heartbreak at witnessing the oppression and exploitation of mill workers and coal miners. She lived during a time of great social change, with threats of fascism, totalitarianism and the horrors of two world wars and the Spanish Civil War, during which promising young artists died. Hepworth and many of her peers were committed to laying the foundations for the future, to enable, in her words, ‘an understanding of the true relationship between architecture, painting and sculpture’. She fought against ubiquitous sexism, and gave hope to generations of women artists. Fiercely intelligent and ambitious, she saw art as the opposite of elitism, and wanted her art to not just be aesthetically appreciated. She had a utopian desire to reform the world through ideas and art. She was an anti-nuclear campaigner, environmentalist, socialist and feminist, and was passionate about the natural world, Neolithic monuments, literature, poetry, science and technology, as well as spirituality and Christian Science. She also loved music and dance, and saw a great affinity between music and abstract art; the composer Priaulx Rainier was a close friend. In 1951, Hepworth did stage sets and costume design for Sophocles’s Electra at the Old Vic, London, and for Michael Tippett’s 1955 production of The Midsummer Marriage at the Royal Opera House in Covent Garden.

She was a fine drafter, and had classical training. In 1920, she won a scholarship to study sculpture at Leeds School of Art where she became friends with Henry Moore, and they both went on to attend the Royal Academy. Just as with Pablo Picasso and Georges Braque during the early days of cubism, there was a cross-fertilisation of ideas between Hepworth and Moore, and it is sometimes difficult to tell their artworks apart. She was greatly influenced by Roger Fry’s ground-breaking exhibitions of European and British post-impressionist painters, as well as by radical new art movements that reflected this period of extraordinary technological and social change. Naum Gabo’s Constructivist principles to ‘create or enrich reality’ using ‘elementary, accurate and primary shapes’ deeply resonated with her, as did the Vorticists’ celebration of industry and the machine age. She advocated a dialogue between science, art, mathematics and music. While at the Royal Academy, Hepworth and sculptor John Skeaping fell in love. When he won the British Prix de Rome in 1924, she joined him in Italy, having herself won a West Riding Scholarship to study in Florence, where they married in 1925. In Italy, she recognised what was missing in her Yorkshire childhood: light. During this formative period in her life, she studied Romanesque and Renaissance art and architecture, and in Rome, she was introduced to carving marble. She said that being told ‘that marble changes colour under different people’s hands made me decide immediately that it was not dominance that one had to attain over material, but an understanding, almost a kind of persuasion, and a greater coordination between head and hand’. Her first carvings in marble were of doves that they kept in their studio in Rome. They shared a love of animals, and when they returned to London in 1926, they rented an apartment with a garden where they built an aviary. They were both influenced by sculptures they saw in the British Museum and V&A made by non-Western artists.

Hepworth and Skeaping’s marriage deteriorated, but they remained friends and co-parented their son Paul after a divorce in 1933. Meanwhile, she had fallen passionately in love with the artist Ben Nicholson, who at the time was married to Winifred Nicholson, another artist. In 1934, Hepworth became pregnant with Ben’s child, which turned out to be triplets – a complete shock as ultrasound had not yet been invented. She adored her children, but needed to keep working; the demands upon her as a professional artist were huge. She was married to Nicholson from 1938 to 1951, but he divided his time between Winifred, with whom he had an open marriage, and Hepworth, who was essentially left as a single mother of four children. Her letters reveal the tensions and logistics of finding time to carve and raise a family. Both of her husbands, like her, wanted time for their own art practices. She deeply loved her children, but had an essential need to retain her own identity and agency. Her forms reflect the inspiration she said her children gave her: ‘I hope to discover some absolute essence in sculptural terms giving the quality of human relationships.’

In an essay for the Architectural Association Journal, Hepworth wrote about the symbiotic relationship between material and concept that carving allows. She celebrated the ‘unlimited variety of materials’ from which she drew inspiration, and noted that ‘it would be possible to carve the same subject in a different stone each time, throughout life, without a repetition of form’. She was highly sensitive to materials, and like Michelangelo, the act of carving allowed forms to emerge and ‘free’ ideas. In other sculptures, she worked with a clear idea of what she wanted to do. She never dispensed with representation, but her figures and animals became increasingly abstracted as she strove for universal human forms. Later in life, she was excited to work in metal on monumental commissions. She continued to draw and paint, and worked through ideas concurrently in both two and three-dimensions.

On a trip to Paris in 1933, she visited the studios of Hans Arp, Picasso, Braque and Constantin Brâncusi, and their work had an enormous impact on hers, particularly how Arp fused landscape and the human figure. She maintained a close connection to Paris, and had lifetime friendships with many avant-garde artists, including Arp, Gabo, Alexander Calder, Joan Miró, László Moholy-Nagy, Braque and Mondrian, whom she helped to find a studio in London before the war. The reality of the war years on British artists’ lives are vividly brought to life in this book.

During the Second World War, Hepworth left London for Cornwall, where, with very little money, space or materials, looking after four children gave her little time to do the work that she wanted, despite having a live-in nanny. As the war years continued, she and her children suffered severe ill health and worry – medical costs were huge before the NHS was established. She experienced financial hardship and tried various ways to make money, including making linocuts of geometric designs – some of which Fortnum & Mason bought for £10 each and used for furnishing fabrics. Yet despite all her difficulties, she celebrated the richness of her life in St Ives and Carbis Bay, and loved the Cornish countryside. As with Yorkshire, the colours and textures of the rocks, landforms, sea and tides directly influenced her work. Trewyn, her St Ives home and studio from 1949 until her tragic death in a 1975 fire, was acquired by the Tate in 1980. It is a memorable experience to see her studio and the sculptures that she placed among the lush vegetation of her garden, where she worked in the open air.

Barbara Hepworth was awarded a CBE in 1958 and the DBE in 1965, but her national and international success was hard won. She faced many difficulties and tragedies in her life, including the death in 1953 of her son Paul, an RAF pilot, in an air crash in Thailand. Plus, the terrible suffering she endured from cancer during the last years of her life. She wanted art to be integrated into society, and wished that architects and sculptors could collaborate from the very beginning of projects. Seeing the magnificent statuary and architecture in Venice when she was the UK’s representative at the Biennale in 1950, confirmed her belief that ‘sculpture should act not only as a foil to architectural properties, but the sculpture itself should provide a link between human scale and sensibility and the greater volumes of space and mass in architecture’. This book will vividly illuminate hitherto unknown aspects of her life and prolific art practice, and will be an inspiration to many.