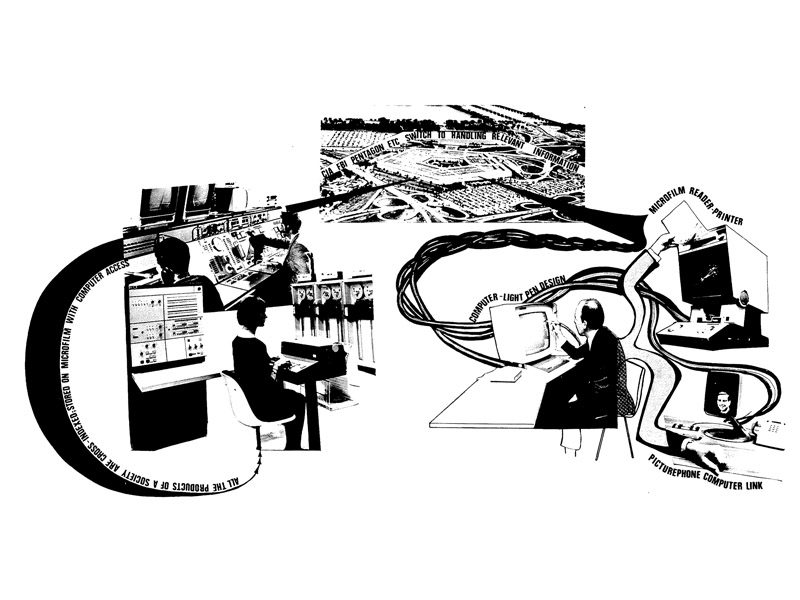 Main image: A diagram of Consumer Democracy, from the newly updated and expanded Adhocism

Adhocism - The Case for Improvisation by Charles Jencks and Nathan Silver was first published in 1972 and, according to its frontflap, 'was part of a spirit that would define a new architecture and design era'.

In the context of Jencks' later books, such as the The Language of Post-Modern Architecture (1984) and, more recently, The Story of Post-Modernism (2011), I suspect that the reissue is an attempt to retroactively position Adhocism as one of the books which was important in formulating the post-modern critique of the modern movement. Undeniably, a mood change did take place in the Sixties and Seventies, and a good barometer for what was happening is a brief look at some books published at the time. The Sixties opened with Banham's Theory and Design in the First Machine Age (1960), a book which still fully underwrites the so-called universalising fable of the modern movement. It is worth remembering that Jencks studied for his PhD with Reyner Banham at UCL in the late Sixties and it would not surprise me if he wrote Adhocism to set himself apart from his teacher and his positive attitude on the use of the latest technology in modern architecture.

The cracks in the myth of modernism began to show, naturally with Jane Jacobs' The Death and Life of Great American Cities (1961), (which is an impassioned plea against centralist planning bureaucracies and for community advocacy), and with Robert Venturi's Complexity and Contradiction in Architecture (1966), (which attacks the purist formal language of high modernism). The Sixties end with the first expressions of the budding environmental movement in architecture, for instance in the Whole Earth Catalog of 1968; an impressive compendium with everything one needs to 'go native' and off-the-grid.

The book Adhocism is clearly indebted to these, and its main aim appears to be the positioning of the do-it-yourself culture of the Sixties as an empowering, even revolutionary, choice against the anonymity of consumerism, mass-production and bureaucraticplanning methods.

The term adhocism, as explained in the foreword by Jencks, is a conjunction of ad hoc, meaning 'for this particular purpose' and -ism, shorthand for a movement. In architecture it purportedly means 'design, essentially a collage, where every part of a building, or each element of a building complex, is designed with scant regard to the whole, and often involves disparate parts taken fromcatalogues', (according to architecture professor James Stevens Curl).

The authors try to give adhocism the weight of architectural theory, which is contradicting the essence and fluid nature of experimentation

Straightforward as these explanations may sound, the book itself has great difficulty getting its point across and is episodic. Firstly, it cannot be expected for a book which attempts to capture the zeitgeist of its time to remain relevant in its entirety some fourdecades later, and secondly the term ad hoc is applied to so many disparate subjects that the book reads as an agonising struggle to justify itself. The original edition consisted of two parts, six chapters written by Jencks and four by Silver. The current edition is expanded with an introduction and afterword by both. Interestingly enough, the new parts are as much a collage as the original, and the subjects are as diverse as the paintings of Hieronymus Bosch and Hot Rod sub culture. To give equal weight to high art and Pop is a clear dialectical choice, but that does not mean that it is convincing.

In summary, Adhocism -- especially according to Jencks -- is an argument against singularity and universality, and in favour ofindividual choice and pluralism. There is a clear link to the maker culture of today when he argues that a culture of improvisation and making can be liberating, especially when set against systems of bureaucratic and technological control.

Ad-hoc solutions, serendipity and spontaneity are cornerstones of the creative process, no doubt, but they are the opposite of premeditation.

In suggesting that adhocism is an attitude or a movement, Jencks and Silver try to give adhocism the weight of architectural theory, which is of course contradicting the essence and fluid nature of experimentation and spontaneity.

This inherent contradiction was already noted by Rowe and Koetter when they dismissively coined it under the chapter heading the 'Politics of Bricolage' in their Collage City (1978). While Rowe and Koetter acknowledge that adhocism, and similar notions of the Sixties such as advocacy planning, have done much 'to break down an unmanageable monolith', they point out that the promises of freedom and democracy, as implied in adhocism, do not translate well to the day-to-day realities of governing and achieving a balance between conflicting interests.

When Jencks embraces the spontaneous self-organisation of the Arab Spring in Egypt and other countries, he indeed poses thequestion 'how to turn such a fledgling pluralism into a workable federation'. However in this book, you would be looking in vain for an answer.