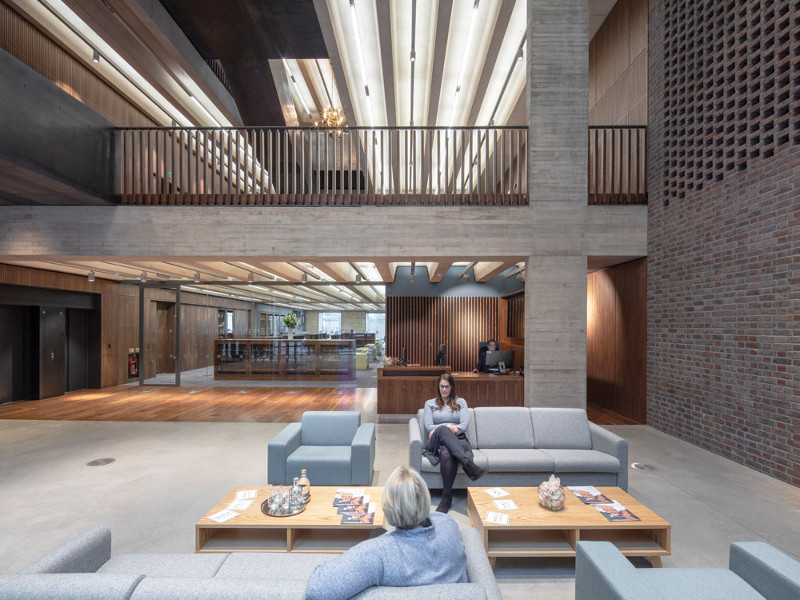 After several decades based in its Regency-era home, the Royal College of Pathologists has relocated to a modern, all-new headquarters designed by Bennetts Associates

The London headquarters for the Royal College of Pathologists (RCPath) fulfils a number of different functions: it is an educational and research space, a workplace for 75 staff, and provides social, event and working space, and even a limited amount of overnight accommodation, for its visiting members. The organisation is a charity, supporting more than 11,000 members worldwide. The new headquarters designed by Bennetts Associates needed to represent this prestigious organisation and be a home of which it could be proud.

The building marked one of the most significant changes in the college’s history: from only a few years after its founding in 1961, the RCPath had been located in the impressive Regency-era Carlton House Terrace just off the Mall. Designed by John Nash, it had been leased from the Crown Estate for an extremely low ‘peppercorn’ rent since 1969. In 2011, however, with only a few years remaining on the lease, a sale was decided on between the RCPath‘s College Council and the Crown Estate. Leaving the white stucco column-fronted building behind would free up £45m for the college to purchase a new site, while the Crown Estate, now with a more commercial ethos than it has had in decades past, was keen to use the building for more profitable purposes. Number Two Carlton House Terrace has now been redeveloped by Eric Parry Architects to provide high-end residential and office space. For the RCPath, while it wasn’t possible to purchase a site nearby in the West End of London, it found a suitable location in Aldgate to the east of the city instead. Grand waxed steel staircases wind through the floors of the building

Bennetts Associates was familiar with the needs of the college because it had previously restored the interiors of Carlton House Terrace in 1993, as well as creating a new education centre in the basement there in 2003. Given the building’s Grade I listed status, these projects offered nowhere near the same scope to tailor the building to the RCPath as the new site did.

Starting with the facades, the front is elegant but straightforward and rectilinear, whereas the back is more playful with deep, angled bays adding interest while also controlling daylight and solar gain. The bays on the lower floors face inwards towards the square, inviting passersby to look in, while for the upper, private floors the bays switch direction, turning away and up over the roofs of nearby buildings. The two facades of the building have a different character

Plans of the building reveal what Bennetts describes as the ‘layer cake’ of different functions that sit behind these facades. All services are located in the basement, while the ground and first floors are public-facing, with a library and workspace for members, an event space, and the main 210-person conference room closed-off just beyond. Further event space can be found on the sixth floor, including two adjacent external terraces. Workspace for the college’s permanent staff spans the middle floors of the building.

With a deep plot, large atria were introduced to bring light into the centre of the large floor plans. Setbacks on the first, third and fourth floors open up double- and triple-height voids throughout the eight floors, linking spaces together. The double-height foyer linking reception areas and first floor events space helps bring a bit of ‘buzz’ to the foyer. Although the selection of materials is pared back, the choices of the concrete frame and brickwork cladding have enduring appeal, and the materials’ qualities are carefully explored and made the most of by Bennetts Associates. Concrete is the biggest player in the design and is used in a number of ways: polished floors, board-marked on internal walls, and for deep, coffered ceilings throughout the building. The colour palette is very much material-led

With increasing concerns about the viability of concrete, it should be noted that while it is visually very present throughout this design, it has been used carefully and efficiently. One-quarter of the concrete for this project was reused from the structure previously on the site, with the existing foundations retained even though the original building was deemed too difficult and costly to convert. Across the building there is a high surface area of concrete relative to the amount of concrete used, which helps with the building’s passive cooling strategy. The ceiling coffers, present throughout the building, are only around 250mm thick, and even thinner in the middle, explains Simon Erridge, director at Bennetts Associates. Workspace for the college’s permanent staff spans the middle floors of the building.

The shapely coffers also add height to the internal floors. Other details, such as extruded and latticed brickwork and timber walls, bring warmth and tactile interest, while the staircases that grandly work their way throughout the building are marked by waxed steel surfaces. Conference rooms and events spaces are provided for RCPath’s membership

Within the material-led palette there are highlights of blue that belong to the RCPath’s branding and are a brief interlude of colour in the scheme. The organisation’s presence is more obviously felt in the portraits of previous presidents that line the first-floor events space, along with chandeliers taken from Carlton House Terrace; RCPath was allowed to take some mementos from the old building, and key books and artefacts from the college’s past and of importance to the profession are on display in the members’ room and library area too. A less serious element is a pathologists’ version of ‘Instagrammable’ selfie walls, which come in the form of blown-up colourful images of different diseases in every bathroom throughout the building.