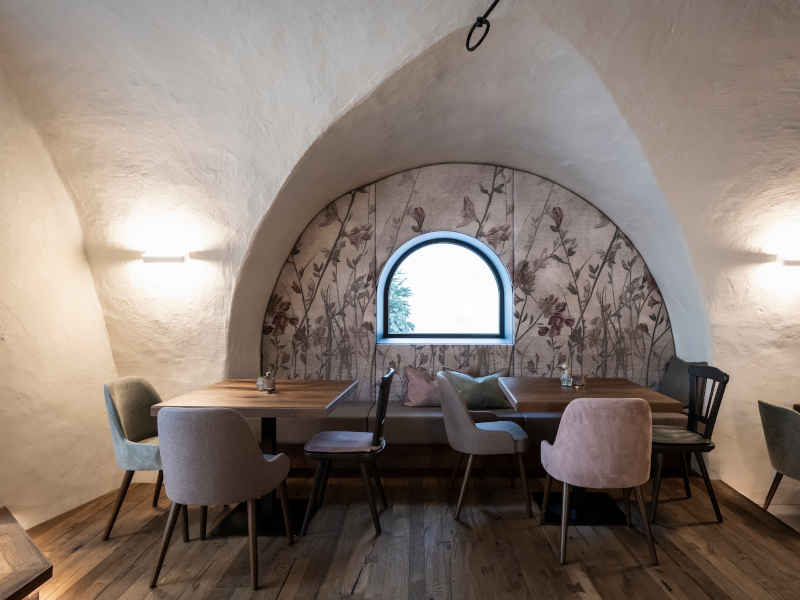 An ancient barrel-vaulted workshop has been transformed into an inviting and history-rich dining space in the streets of the Italian town of Bolzano.

Architects noa took on the project to restore and reinvent the space of a house in the centre of the historic trading city. ‘The house has a fascinating past that goes back centuries and overflows with life and variety,’ said Stefan Rier, noa’s founder and lead architect of the project. ‘It has been in the hands of the Teutonic Order, a goldsmith named Hanns in the 15th century, the town secretary Ennthofer in the 16th century, and a long line of families thereafter. With our intervention, we wanted Bolzano’s mercantile history to emerge clearly from these walls.’

The project involved the space on the ground floor where shoemakers, carpenters, carters, wood and fruit merchants worked in the 19th century, and where later the first restaurant on the street was established. Although the building preserved its charming original architecture, it had deteriorated over time. The Mayr family, current owners of the building, commissioned noa to restore and plan the interior to create the new Bogen bistro.

The strong relationship with history was crucial in the definition of the project, both because the house is under monumental protection and because the design team wanted to emphasise the original architecture of the arches, from which the bistro takes its name – Bogen is German for arch. 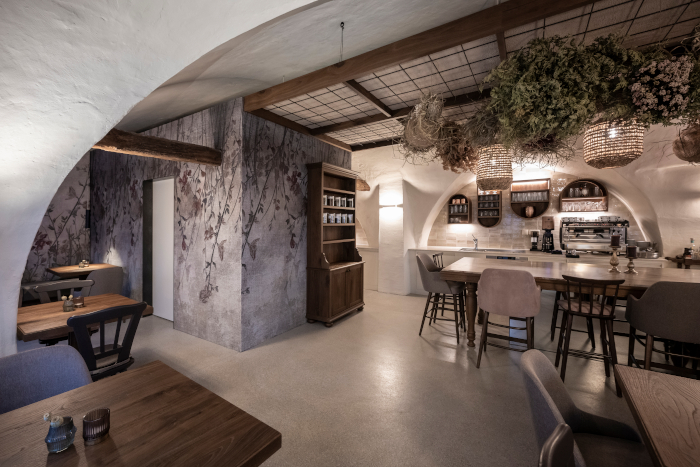 The spotlights were designed to emphasise the curves of the arches. Image Credit: ALEX FILZ

On the exterior facade, the intervention consisted of a careful re-plastering in smoky white and an enlargement of the entrance arch. Here, a new tripartite black metal window follows the segmental arch and allows good natural lighting while providing an essential and timeless design.

For the interior, the four arches were emphasised, which on both sides mark the almost 19m depth of the room. It meant that noa had to work on both the horizontal and vertical dimensions. The internal height difference was resolved with an oak platform at the entrance, while a grey-beige polished screed was chosen for the floor. In this way, there is no strong colour contrast with the walls and the harmony of the shades enhances the space. The lighting was designed so the spotlights emphasise the curves of the arches.

During the initial meetings between the clients and the interior designers, which focused on the ambience of the bistro, the clients’ desire to have a romantic, bohemian-style atmosphere emerged. In addition, the owner of the house wanted to give the space a personal touch with her handcraft and artistic talents in the form of floral compositions. Noa took up these ideas and structured the design around a 7m-long counter placed under a ceiling of flower baskets. Silvia Marzani, interior designer at noa, said: ‘The flower vault immediately became the highlight of the interior design. The upturned baskets filled with dried flowers are a suggestive image that symbolises the transience but, at the same time, the beauty of life.’ 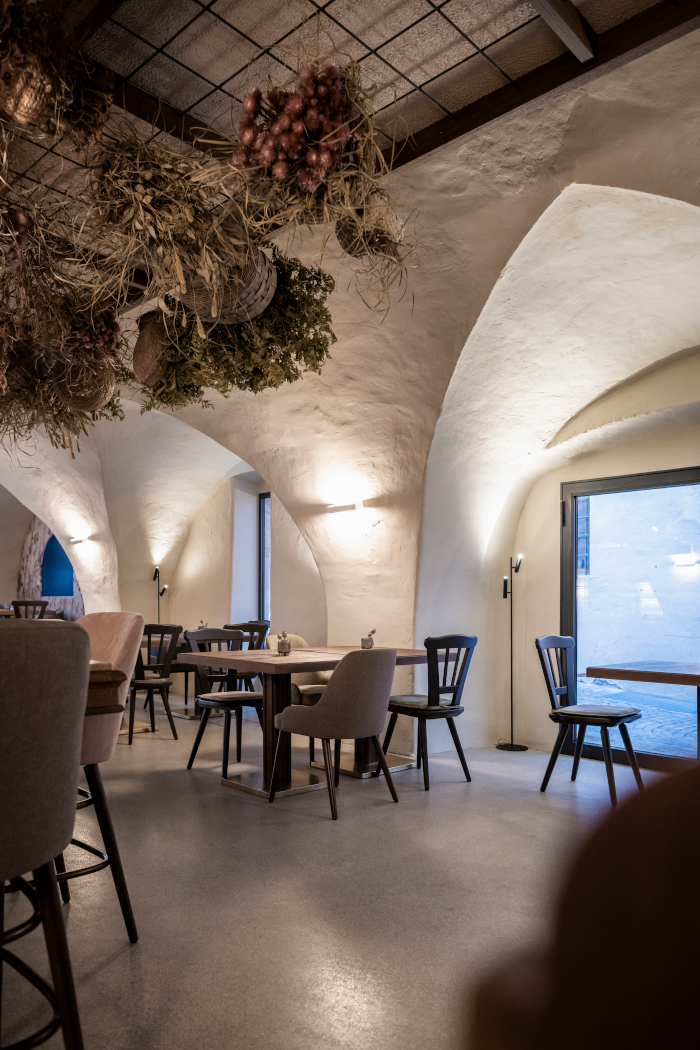 The entire space was designed with an emphasis on Bogen’s strong relationship with Bolzano’s history. Image Credit: ALEX FILZ

The shared space of the large counter contrasts with the intimacy of the small tables on the left side of the bistro, sheltered by the arches and overlooking the alley. The feeling of privacy is further accentuated in the first pair of arches, with seating built into the recesses and walls covered in fabric with an elegant floral print. The niche closing off the room is also designed in the same way.

There are two service areas – the kitchen, which has been completely renovated and is located at the end of the room, and the toilets. These have been accommodated in a box, clad with perforated metal panels, on which the same floral motif of the arches has been printed. This approach combines the technical requirements of acoustics with the venue’s aesthetics, using insulation panels which are not visible under the perforated metal surface.

Marzani added: ‘We took care of every detail in this project and managed to create a consistent design with a strong contemporary character within a centuries-old structure. The result is a step into Bolzano’s present and past at the same time.’
www.noa.network