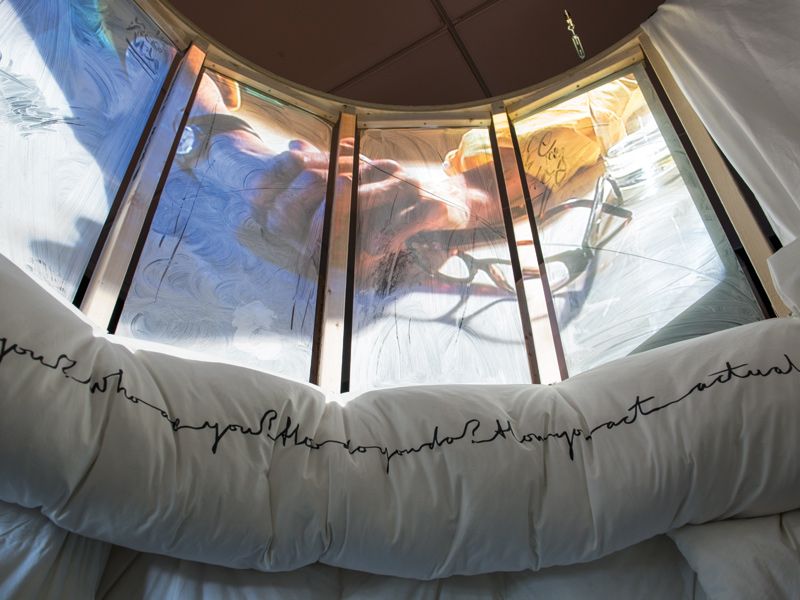 At the end of 2014, Blueprint put out a call for an architect to apply to work with an artist on a £40,000 architecture/art commission at BALTIC Centre for Contemporary Art, jointly funded by BALTIC and Ryder Architecture, with a sponsored prize by Ibstock. We had a great response and after a thorough prejudging process, we visited the studios of three architects before choosing Atomik Architecture. BALTIC then selected a number of artists that it thought might be having a strong empathy with Atomik, and the final pairing was with Alice Theobald. We brought Theobald and Atomik together for the first time in mid-May and then caught up with them again two weeks before the opening of their show in December.

The outcome is an ambitious, site-specific installation comprising sound, video and live performance entitled It's Not Who You Are, It's How You Are. It consists of a series of familiar, yet unsettling spaces - rooms with everyday materials, texts and projections. A platform slices through the gallery to become a stage for a series of part-choreographed, part-improvised performances, and an accompanying musical score will explore the circularity and slippage of language and the interplay between performer and viewer. Below is an edited transcript of the conversation in which Alice Theobald and Atomik Architecture's Mike Oades and Derek Draper first explained the final concept to Ryder Architecture's senior partner Peter Buchan and Blueprint editor Johnny Tucker.

Johnny Tucker: So, when did it all really get started after we first met in May?

Derek Draper: There was a bit of a hiatus while Alice was touring in Europe with her band!

Mike Oades: I think we really got going in August, although we tried to have a number of shared experiences beforehand.

DD: We went to see Alice's two shows at the Lisson Gallery, London and the Focal Point Gallery in Southend, where we shared fish and chips in the rain.

Peter Buchan: And was there a moment? Or, did it all just gradually emerge?

DD: I think there were obsessions, but it did gradually emerge. We just kept on writing and drawing. Sometimes, you'd think it wasn't really going anywhere, and the next day you'd come in and there'd be a great leap forward and it just naturally flowed.

MO: We have a very long piece of tracing paper that we worked on.

Alice Theobald: The first time I visited, the drawing was really useful, and was a good way of getting to know each other and build the trust.

DD: As a process it's great to have one idea and then do another in a different space and then draw arrows when you start seeing links, et cetera. Atomik Architecture's computer rendering of the cylinders in the BALTIC space

JT: So what was the actual starting point for the collaboration?

DD: We were talking about domestic environments very early on, about Adolf Loos' apartments (see Blueprint 343) and Anthony Vidler's The Architectural Uncanny.

MO: Taking the familiar and making it unfamiliar.

DD: Yes, and domestic detail and how you can transform that to something else. Alice also had ideas about acoustics.

AT: It all also started with trying to find parallels with an architectural performance and a practice like mine, which is working with performance mainly in terms of framing and how you experience space, and how your experience is paced within that and the element of time. With my work, I'm also very interested in how it is represented through the flat frame of a camera - and how it is edited and fed to you. How the final art installation turned out

PB: So, the environment you've created is evocative of domesticity?

DD: Yes, but skewed, though the elements are recognisably domestic. We started by making large models and talking about moving between spaces and whether you are viewing or being viewed. We began with the cubes and the volume of the space, and it slowly morphed via looking at domestic construction techniques.

MO: And at the same time there was a circular narrative that was forming.

DD: That is printed on the cylinders at a low level.

MO: There's also a circular route with each cylinder having an entrance and an exit. PB: And is there a recording as well?

MO: Yes there's a script, a chorus and a soundtrack. Each of the four volumes has a voice and they all have a camera and live feed projection. There is a way of manipulating what is projected. Performers also alter the space by altering the positions of the cameras and lights, and some of them play instruments. People's experience will vary depending on which space they are in.

AT: Sound has been an ongoing fascination for me. You can have the same lines repeated, but with a different soundtrack, and that will totally alter the way you experience and perceive it.

DD: The sound in the piece changes and is linked to the different forms and sizes. Some of the cylinders are quite tall, others quite tight and each one has its own soundtrack that is a slight variation on the one that has gone before. And then, in between these, on the outside is the chorus that is playing.

AT: The dialogue is almost like calling across from an apartment or window.

And the performers, apart from moving the cameras around, will also be moving the lighting, which will be projected back onto them. JT: So, what are the scripts that are printed on the interiors?

Some of the language is quite clichéd, but then it morphs into something that is more emotive in a way and we're hoping it will speak to the performers as well as the visitor to the space. JT: Is there a call and response element?

DD: To an extent the script does ask questions, and then it's responded to.

MO: Each call and response has to work in many different ways.

AT: Yes, and the script repeats so the last line links back to what the first line was, and it becomes this circular dialogue.

PB: And inevitably the idea is that the visitor is engaged with this and drawn in?

DD: Yes, at times they will become part of the performance.

AT: It will be quite a cinematic experience in a way. There will be performances every day. JT: There also seems to be a slight surveillance and CCTV element to this, and you are also controlling the way people are moving through the environment. Is this part of the thinking?

AT: Yes, there's a bit of The Truman Show about it!

DD: And this all kind of loops back to the Adolf Loos' interiors, where many of them are laid out so that you can enter a space and not know for some time that other people are there.

They kind of get to see you come in but not vice versa. You won't know as a visitor whether you are being picked up or not. An early 'cafe sketch' plan of the installation

JT: It's obviously a collaborative project, but did the roles delineate, or did you work together on all of it?

DD: Yes, I think we did. We've all come with quite specific expertise, but it's all kind of knitted together.

PB: That's excactly what we wanted to see from this. My fascination with this is not only bringing people from completely different backgrounds, though with an empathy, together and seeing what the outcome is, but also what is the legacy. I think that's just as important. Has the experience changed you and how you practice?

AT: I often respond to space that exists. I'd never have dared to do anything as ambitious as this with the build; I wouldn't have known where to start.

AT: I do work with other people a lot, like performers and musicians, but it has always been about me being the author, whereas with this we really started the creative process from scratch and that was interesting. My work also has a real personal or psychological element, so it is quite a strange experience having to open up right from the beginning. MO: And from our point of view, as architects we're like surrogate mothers in a way; you develop someone else's project when you have clients. And then when it's done you hand it over.

DD: We also explored a lot of ideas about the feelings and perceptions of space and it will be interesting to see how that comes through in the future.