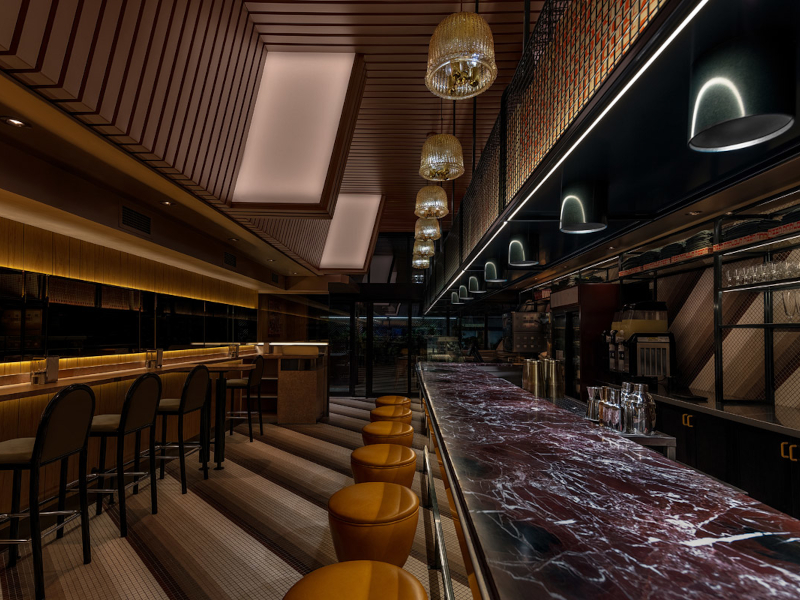 THE ORIGINAL Cafe Gentile was opened in 1959 by Ignazio Gentile, a young Sicilian immigrant who arrived in Canada in 1954 with his wife and five children. Located in a working-class industrial part of the city, it soon became an ‘institution’ in the neighbourhood. While the original cafe remains, the next generation, led by Ignazio’s youngest son Antonio, has grown the project with a second Cafe Gentile in Montreal’s affluent Westmount district, and now its ‘little brother’ next door, the Gentile Pizza Parlour.

Atelier Zébulon Perron designed the interiors for the Westmount location in 2016, and was then asked to deliver the pizza parlour too – though with a distinct flavour for this latest project that breaks from the Cafe Gentile mould. That’s not to say they’re forgetting the past entirely; this one takes on a more personal story for this generation of Gentile. Speaking to Zébulon Perron, director of his eponymous studio, he explains that ‘it was a lot about [Antonio Gentile’s] childhood; you know they used to go down to the States, New Jersey and New York, and go to these […] old school pizza places’. He continues, ‘as much as they are an Italian family they are an American-Italian family and they really wanted to pay homage to the New York pizza joint’. 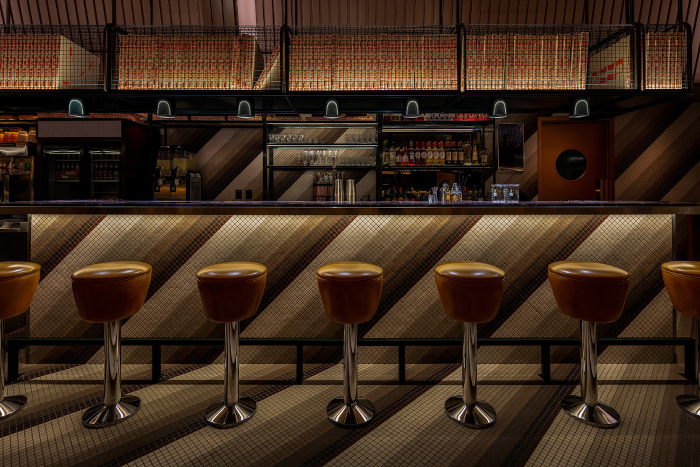 The pizza boxes were incorporated into the design of the bar

Perron describes nostalgia ‘as a building component’ for this project, which informed decisions on colour, graphic elements and materiality throughout.

The colours are of the ’80s: beige, brown and rose gold, used across flat surfaces as well as the design’s most recognisable feature – a linear gradient motif set at 45º and realised in custom-made tiles, and used across flooring, walls and counters. This helped to break up the long, narrow shape of the plot; Perron says this wasn’t a commercial unit previously, but instead the corridor between them within a kind of mall. Perron was looking for this to be a dynamic element of the design, but also something instantly recognisable, he explains, commenting on the modern-day need for restaurants to have a strong visual presence online. 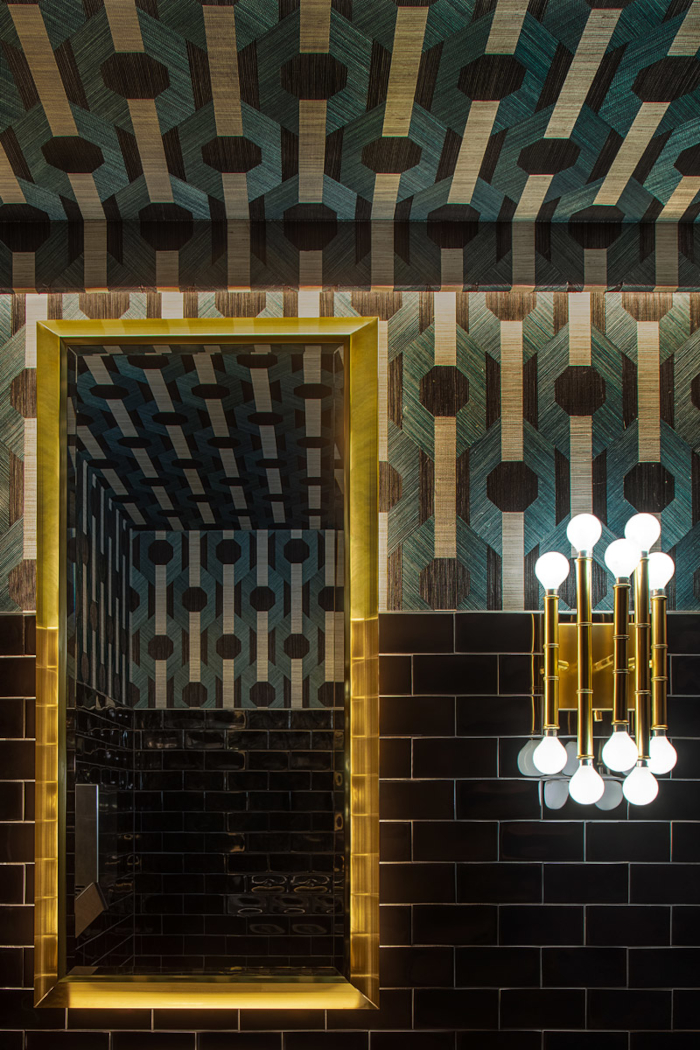 vintage elements aim to create a feeling of warmth and familiarity

The building itself dated to the 1980s and, though relatively unremarkable, had various features that could be incorporated into the design, including a linear slatted ceiling as well as lightboxes on the sloped ceiling that previously denoted the entrances to each of the commercial units. These have been kept to provide additional lighting in the space.

Perron explains how they used a mix of ‘noble materials’ as well as démodé ones – this meant combinations of real marble, walnut, vinyl, pewter, leather, pre-finished wood panelling (‘that you would have in your grandmothers’ basement’), ceramic tiles, steel, amber glass and mirrors. ‘…And so these things live together in order to create this equilibrium where we want to make sure that it feels there’s an effort and a quality, [but that] it’s unpretentious… it’s inclusive,‘ Perron explains. 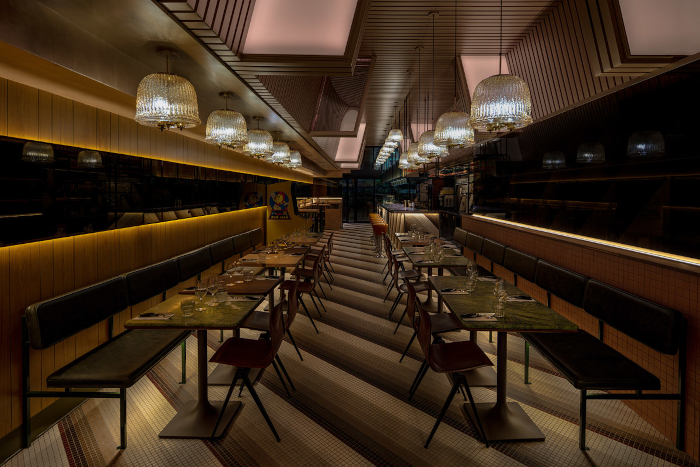 the linear gradient motif helps to break up the plot's long, narrow shape

While the atelier designed the built-in elements such as counters, banquettes and tables, the loose furniture is sourced from flea markets, including a lucky find of 22 identical vintage light fittings. The space has a mixture of higher counter spaces, a bar area and large shared table next to where the pizziolo is working, and a main dining area with standard table heights.

A specific solution needed to be found for the many pizza boxes that have to be stored – an occupational hazard of a pizza parlour, of course – and the atelier decided to keep these on show and incorporate them into the design, creating an overhead element above the bar, and working with the graphic designers to ensure that the exposed edges of the boxes featured an interesting graphic. 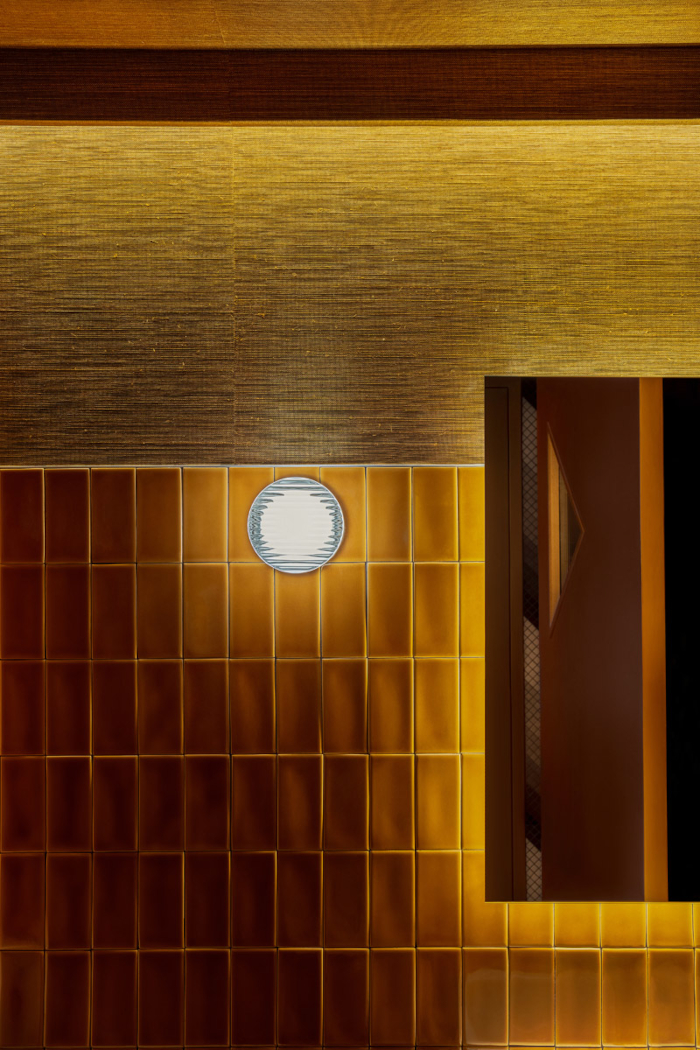 The colours are of the ’80s: beige, brown and rose gold

Though some nostalgia is indulged and the space is evocative for the client, the overall effect is not one of pastiche but instead something new – and crucially something that helps the Gentile family to drive its brand forward too.

Coming back to how old and new combine in this way, Perron describes it as a ‘mnemonic remix’, where contemporary gestures are balanced out with ‘mnemonic winks...or memory winks’ – an aptly cheeky and friendly gesture for a welcoming new space in the city.