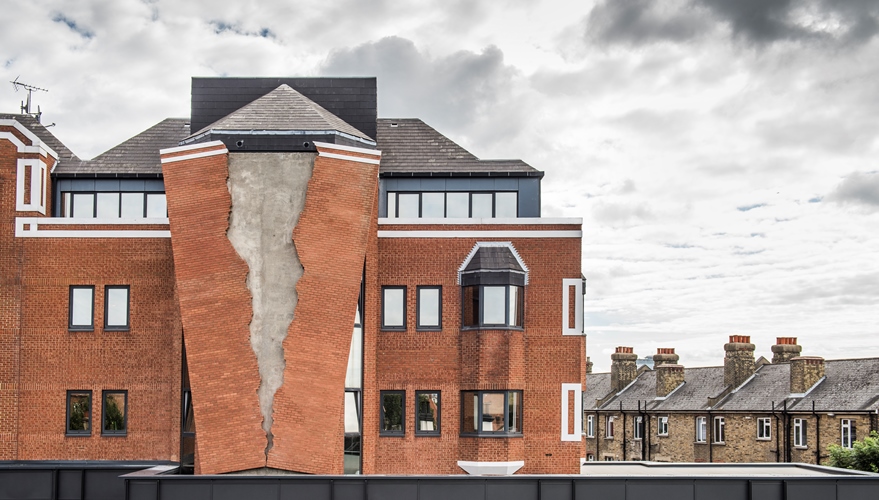 Assembly London has a new permanent installation and it’s causing quite a stir.

The art work, by Alex Chinneck,  is entitled ‘Six pins and half a dozen needles’ and is comprised of 4,000 bricks and over 1,000 stainless steel components.

At a glance, the colossal structure, which stands 20-metres above ground level, creates the effect that the building it is attached to is splitting down the middle. It marries together Chinneck’s signature use of art, architecture and engineering to create an ambitious combination of surrealism and spectacle.

Alex Chinneck said:  “The work was conceived to engage people in a fun and uplifting way. Although we use real brick, it was designed with a cartoon-like quality to give the sculpture an endearing artifice and playful personality.I set out to create accessible artworks and I sincerely hope this becomes a popular landmark for London and positive experience for Londoners.”

The art work, which was commissioned by AXA Investment Managers - Real Assets, is situated on Assembly London, a mix use area that will be home to offices, retail units and restaurants designed to create a highly collaborative community-based work environment. When Looked at from certain perspectives, the sculpture looks like a piece of paper ripped in two. This is to pay homage to the publishers that previously owned the building and worked there for two decades.

Harry Badham AXA IM - Real Assets’ UK Head of Development said: “Successful workplaces in today’s world are the home of creative thought which is why we made art integral to our vision for the Assembly London master plan. It has been a pleasure working with Alex in creating this thought provoking installation which is accessible to everybody and will hopefully raise smiles and questions alike.”

Chinneck worked tirelessly on the 14-month project with engineers, steelworkers and brick-makers to create his vision.

“Following 14-months of development, this represents my studio’s first permanent project and we are excited to be working on more. Forthcoming artworks include a trail of four sculptures with a combined height of 163-metres that will be constructed from over 100,000 bricks.” Chinneck said.