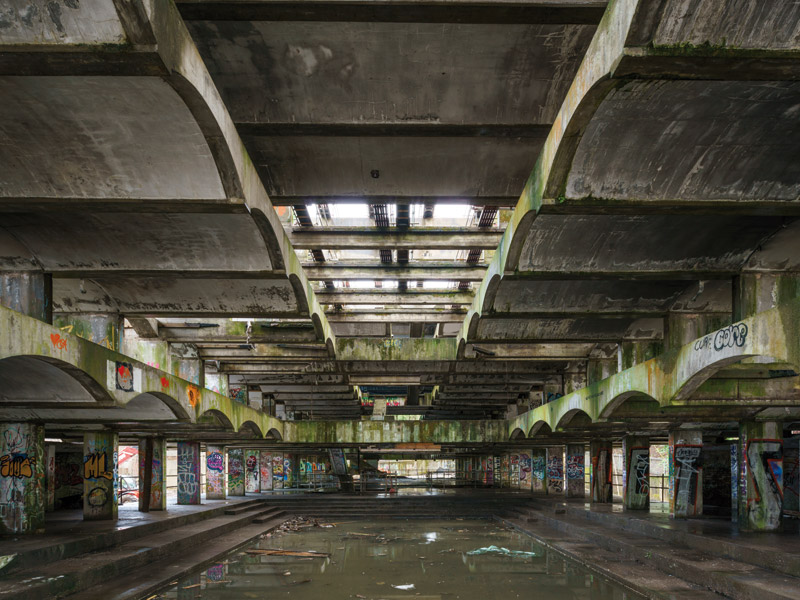 Finally made safe after decades of decay, St Peter’s Seminary, designed by Gillespie, Kidd & Coia, is about to begin the next stage of its extraordinary life. Gareth Gardner explores Scotland’s iconic modernist ruin

As the commuter train from Glasgow pulls into Cardross station, it's a dreek winter's day. Clouds obscure views over the Clyde, the air is loaded with moisture. A taxi then heads into the countryside, the ride terminating at a gap in the trees, the start of a well-worn driveway. The journey proceeds on foot, circumventing vast puddles, pursuing a route through mysterious woodland, across steep gorges and over the rushing waters of Kilmahew and Wallacetown burns.

After crossing a semi-derelict gothic bridge, the parapet fragments smothered in graffiti, the lane curves sharply left. And there it is, suddenly emerging from woodland, the hulking structure of Scotland's most celebrated modernist building. Water is everywhere, cascading off surrounding embankments, gathering inside the former chapel creating a formal pond while turning the inner quadrangle into a sodden quagmire. The arresting ruin of St Peter's Seminary looks nothing more than the abandoned relic of contemporary civilisation in a dystopian near-future, about to be discovered by the characters of a Margaret Atwood novel. Of course, that's exactly what it is. Our present is a future not envisioned for this priest training college when it was designed in the early Sixties by Andy MacMillan and Isi Metzstein of architecture practice Gillespie, Kidd & Coia. Now, after coming perilously close to being lost forever, the former religious institution is reopening as a secular arts venue. A small community of sisters, serving the trainee priests, lived in their own convent block

During nine nights in March visitors will walk the same route through the 60ha site. They will safely be able to explore the ruins, transformed with a series of light installations, projections and a choral soundscape by composer Rory Boyle. The Hinterland event, produced by Glasgow-based arts organisation NVA, is the official launch event of Scotland's Festival of Architecture 2016 and also marks the 50th anniversary of the opening of the seminary. There's no doubt that news of the reopening has aroused the passions of latter-day modernists and brutalists around the world. Thanks to its story of decay, dereliction and discovery, St Peter's Seminary has attained almost mythical status. The seminary's original plan consisted of three modernist blocks constructed around the Victorian Kilmahew House, surrounded by landscaped gardens and ancient woodland. The original entrance was across a moat

The main building contained key elements, including chapel, sanctuary, crypt, sacristy and student accommodation within a distinctive ziggurat design. This stepping-back section allowed internal balcony corridors, serving a matrix of cells with distinctive barrel-vaulted ceilings, to overlook the chapel and refectory below. A separate teaching block featured upper-storey classrooms dramatically cantilevering over the library below. There was a separate convent building for the nuns, and the baronial Kilmahew House was integrated as professorial accommodation. The design was hugely influenced by the work of Le Corbusier, in particular the Convent of La Tourette near Lyon. 'St Peter's is one of the most important modern buildings in Scotland, and also one of the most directly Le Corbusian in its influences. There is a direct and vital link to Corb in Scotland, more than anything managed in England,' explains Twentieth Century Society director Catherine Croft.

Looking down into the sanctuary, the shattered fragments of the altar are clearly visible

Yet even on completion it was already doomed to failure. Despite its modern forms, St Peter's was already a throwback. The secularisation of society was prompting a steep decline in the number of those entering the priesthood, and the building was never filled to its capacity of 100 students. 'They had this fabulous location and a beautiful building, but it was all at the wrong moment,' says Croft. 'Not only was there a big fall-off in people wanting to be novice priests, but this building was about siting them in the countryside where they could commune with God in nature, rather than deal with a growing concern for inner-city social issues.' A papal decree underlined this change of approach, explains John Allan, consultant for Avanti Architects, who will be presenting a paper on the project at DoCoMoMo's 14th International Conference later this year. 'Added to various technical shortcomings in the building construction, these factors meant that its days were numbered even before completion,' Allan says. With all the glazing lost, the former library has a very direct relationship with the surrounding woodland

The building was beset by functional problems, causing disputes between architect, engineer and client. It was freezing cold in winter, leaked profusely and was draughty. Maintenance costs spiralled while the priests shivered in increasingly bitter conditions. 'We have interviewed lots of priests who were there in the Sixties. It would have made a monastic life look comfortable,' says NVA creative director Angus Farquhar. A few of the glulam beams spanning the sanctuary remain. There are plans to restore the timber roof structure and rebuild the lantern on top

Since its closure as a seminary and deconsecration in 1980 - just 14 years after it opened - it was used as a drug rehab centre before being abandoned entirely in the late Eighties. A fire fatally damaged Kilmahew House in 1995 and it was demolished. Over the past 25 years - far longer than the building was ever put to its intended use - the remaining derelict structures have enjoyed a half-life as a nexus for alternative culture. 'It became the quintessential postwar romantic ruin; it decayed rather beautifully,' Croft says. Concrete was smothered in graffiti, the advancing dereliction captured by urban-exploration photographers. It was a popular hang-out for goths, the location for music videos, and a place of pilgrimage for architecture students who were unafraid to crawl under the boundary fence. Concerns that the building was being desecrated and used for the black arts prompted the Roman Catholic Diocese to have the sanctuary altar jackhammered. 'There was the idea that it had this mysterious life after dark, a gothic horror,' Croft says. The altar's broken pieces now lie arranged around its cruciform base, one of the few identifiable fragments of the building's religious past. As the state of the building further deteriorated, attracting the attention of both the Twentieth Century Society and the World Monuments Fund, various plans were proposed for its rehabilitation. In 2008, developer Urban Splash, working with architect Gareth Hoskins, advanced a scheme to transform it into a mixed-use housing and leisure scheme. This was abandoned in 2011, with the Archdiocese of Glasgow announcing that no commercial scheme would be viable for the site.