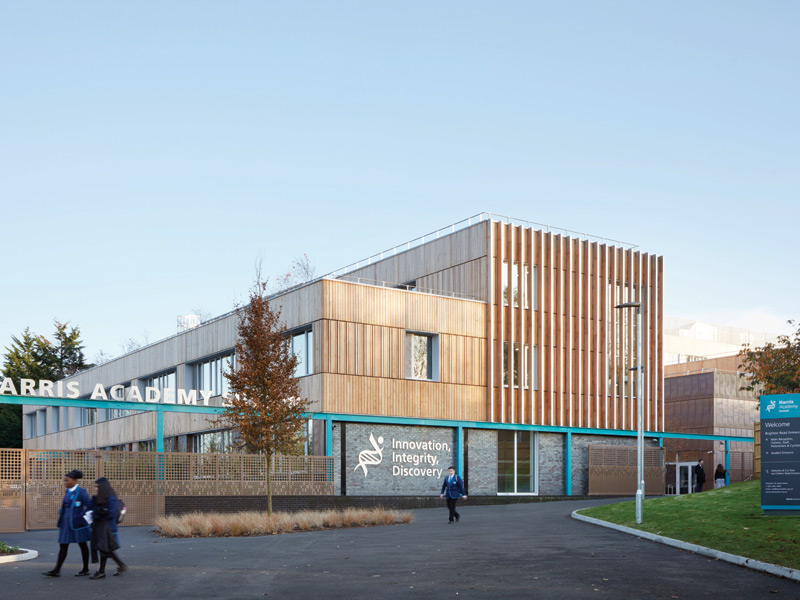 Harris Academy Sutton is the first ever Passivhaus secondary school in the UK, as well as the largest Passivhaus school in the country. It is one of two projects that Passivhaus-experts Architype has worked on for the London Borough of Sutton, both of which are setting the bar high for sustainable education buildings. The second project is Hackbridge Primary School, which not only achieves Passivhaus’ low-energy output, but actually generates renewable energy on site – meaning it is set to achieve Passivhaus Plus certification. A simple palette of materials is left exposed throughout the school

The project is an impressive feat achieved through the careful work of Architype and all the other project collaborators. Christian Dimbleby, associate at Architype, says that achieving the high requirements of the Passivhaus low-energy standards requires the education, cooperation and close collaboration of everyone on board. To help with this, Architype ensured that all the team leaders across the project team went on a two-day introduction course provided by the Passivhaus Trust.

The quality of build needed meant that processes needed to be airtight – and the building literally airtight, with no more than six ‘pound coin-sized holes’ anywhere within the internal 10,625 sq m floor area. Dimbleby credits contractor Willmott Dixon’s flexibility and diligence on this – and other project challenges – with two of its team acting as ‘airtightness champions’. The ground floor required a concrete frame, while above a glulam and CLT frame were used

Despite the challenges of the project, Architype was still willing to try things differently – for example, deciding to put the airtight seal on the outside of the structure, rather than the more typical placement on the inside. With this crucial layer out of the way and outside, building construction could progress without the fear of damaging it.

The team tested its method early on in the build, ordering a window, door and other parts in order to fully assemble a classroom for an airtightness test. It was successful, not only achieving the Passivhaus-required maximum of 0.6 airchanges per hour, but surpassing it by far with 0.3 per hour, a level that was then achieved across the finished building.

For the large, four-storey structure, the ground floor required a concrete frame, while above a glulam and CLT frame were used. The simple palette of materials is left exposed throughout, shaping the look and feel of the project. There is an abundance of timber (in this case, Douglas fir) as well as brick and exposed concrete. There are also areas of copper cladding, most prominently across the sports hall. Only select areas of colour break up the natural palette, with stairwells, seating and the school’s front gate in the school’s signature teal. Looking to the future, while the Douglas fir will fade to a grey, the copper of the sports hall will eventually go the pale green of verdigris, matching the colour scheme nicely too. The building has reportedly had a positive effect on student behaviour

Architype described this palette as ‘mature’ and more reflective of a public building or a university building than a school. While this may well have its downsides, feedback from the client has been positive, with them commenting on how student behaviour has become increasingly mature too.

Another significant factor in this project is that the school is part of a larger whole; though delivered for Sutton Council and run by the Harris Federation, it is at the centre of the new London Cancer Hub (LCH) masterplan, a world class research and treatment facility provided by a collaboration between The Institute of Cancer Research and Sutton Council. The school’s signature teal is used in the stairwell

The school has a special focus on science, and will benefit from its links with the wider LCH. There are 11 science labs, including a flexible demonstration lab with room for an audience of 60. The school will invite guest lecturers to this space and focus on extracurricular research – encouraging students to look beyond the horizons of school. Meanwhile, on a less serious note, Architype has etched a secret message, translated into DNA code, into the school’s gates as a challenge for the students.

The school was the first scheme to complete within the LCH – followed by the new red terracotta-glazed Maggie’s Centre by Ab Rogers Design – and so had certain standards and ideals to uphold in terms of design, finish, quality and sustainability.

The project also benefitted from the support and understanding of the client. The London Borough of Sutton was already convinced of the importance of sustainability, with its own history of ahead-of-the-curve initiatives, including its current One Planet Living strategy, and as the home of the pioneering BedZED project – a zero-carbon eco village conceived of as early as 1997 and completed in 2002. For Harris Academy the council initially asked for the building to meet BREEAM requirements, but Architype suggested Passivhaus while agreeing to meet additional BREEAM requirements such as biodiversity, achieved through the carefully landscaped environs of the school buildings. Architype believes that with its fabric-first approach, Passivhaus is the most promising of the certification schemes, and most conducive to ensuring an optimum learning environment due to its standards on thermal comfort, fresh air and natural light. Though the school has not been open long and is not yet at capacity, the signs are positive, with teachers already reporting a marked improvement in pupil alertness and learning.