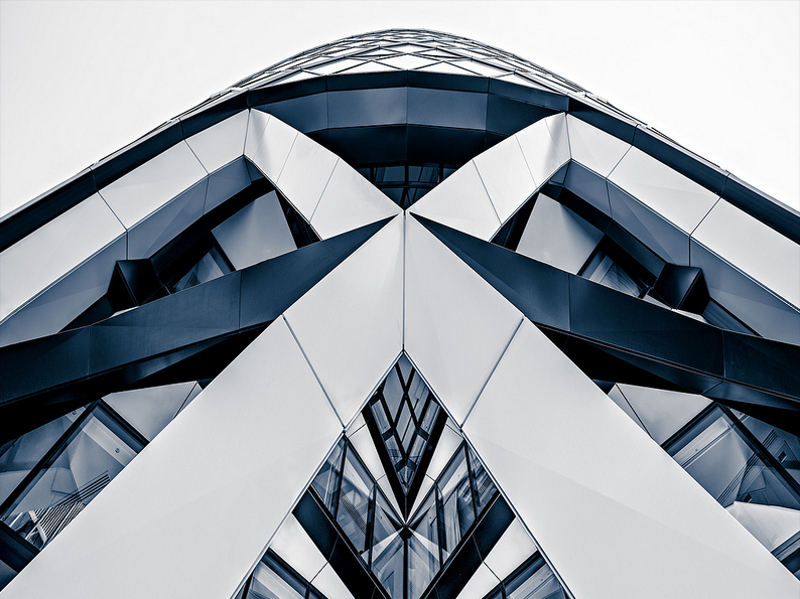 Even the most ardent architecture fans sometimes have to make do with photographs of buildings they may never get to see in real life. Luckily there are plenty of hugely talented photographers willing and able to capture these architectural marvels in their best light. To celebrate architecture photography we asked some of our favourite photographers to share the picture they're most proud of having taken, tell us about how it was made and why they like it I took this image a couple of years ago for my regular Eyewitness feature in FX magazine.

I originally trained as a civil and structural engineer, so was immediately drawn to this vast building site. It's rare to see construction on such an epic scale, seemingly chaotic yet everything ordered and planned. The huge hole is watched over by the buildings of Soho, and I especially love the contrasting presence of the church in the shot.

The photo's concrete grey tones are enlivened by the bright colours of various giant bits of kit such as cranes and high-viz jackets and blue sky. Walk past this site now, not that many months later, and it has totally changed. I find that spirit of transformation in London endlessly inspiring.

In 2013 Selfridges commissioned me to make some exterior images of their famous Oxford Street store with the intention of using for them for advertising, marketing and press.

The store itself has to be one of the most photographed buildings in London, so I challenged myself with the idea to do something that no one else had ever done before and probably never would again. That was to photograph the entire store, front on, in one shot without the use of horrendous fish-eye lenses or distortion.

I did this same concept back in 2002 with the Pompidou Centre in Paris where I stitched together 5 large format negatives seamlessly to cover the expanse of the building. I thought it possible to achieve again here. However, with the scale of the store and the narrowness of the road, we ended up stitching over 250 images together to create this behemoth image. Every architectural element was photographed separately, from the windows, pillars, flags and pavement to the trees and people so that we could keep consistency and integrity in perspective, while also keeping life within the artwork too.

The whole composition took over a year to put together from start to finish. Designed by Sir Norman Foster, 30 St Marys Axe or the Gherkin as it is affectionately know is probably one of the most photographed buildings in London.

I set myself the challenge to capture the perfect symmetry and dark and overpowering presence of the building without hopefully producing yet another stock shot. The strong black and white lines are creating a unique pattern that photographed through a wide angle shift lens and from a very low angle has made the building look exactly how I had visualised.

When I try to find a title for my work I tend to try to tap into the first emotion that I feel when seeing the end post processed product. I could not help but feel that it looked rather sinister and then had to laugh because it was rather comically resembling Darth Wader... It is very difficult to choose a 'favourite photo' and in all truth I don't have one. Saying that, some do stand out, as much because of the time and situation they were taken, a bit like how an old record can rekindle memorable moments in life.

This image of 1111 Lincoln Road by Herzog & de Meuron brings back particularly fond memories as it was taken at a time when H+C were starting to spread our wings outside the UK and Europe. I had been commissioned by John McAslan + Partners to photograph their reconstructed Iron Market project in Haiti. It was a great trip, two equally impressive projects in very different locations! My chosen image is from the Olympic series I shot just prior to the opening of the 2012 games.

You rarely get the chance to appreciate the silence and sheer scale of such grand architectural forms because of the presence of other people. I wanted to celebrate the beauty of both the line and form of these amazing constructions and to capture the incredible sense of calm and stillness you felt walking round them. A rare treat just before the explosion of excitement that the UK experienced that summer.

It's hard to pick just one shot but this interior illustrates a small quiet slice within the grandeur of the Aquatics building. My architectural photography tends to be very simple, quite graphic and clean. I like the shot of signature pink and the division of frame. The image is very two-dimensional and to me is quite 'expectant' in feeling. Sometimes a slice of something says more than the whole scene. Generally speaking, architectural photography is a slower discipline of the medium. No running around for us - the architecture will be there for a while, so take your time. There are occasions though, that you get to act the documentary photographer. Times when you take the camera off the tripod and move quickly. I picked this quiet photo (from David Chipperfield's Neues Museum, Berlin) as it was one of those moments - this man, dressed in matching concrete and stone tones, takes a short breather after climbing the stairs (or perhaps poses for a photograph?), backdropped by athletic reliefs. This is what I most enjoy about photographing spaces - catching people interacting with them.clickclickjim.com I took this shot while on a commission for a graphic designer, shooting the new way-finding and signage in the gallery. A storm was brewing as I arrived and carried on intensifying during the day.

The waves and spray were actually hitting the front of the gallery, so I decided to run outside and take a shot. This image reflects all the things I enjoy about photography: a beautiful piece of architecture being framed by some exceptional weather along with the element of capturing a moment. The wonderful Angela Towler who kindly agreed to help me with this shot complementing Allies & Morrison's architecture.

Dancers make fantastic models because they know exactly how to use their bodies. Angela is one of the most respected in her field. She left us speechless.

After Angela had effortlessly produced about 40 positions all of which worked beautifully, we paused to allow the last of the afternoon light to touch a cloud.

I almost missed it, if it wasn't for my assistant Phillip Reed prompting me that the sun was about to pop out. This was the last frame.

It was certainly an image produced through teamwork, which was the defining thing for me.

Many thanks to Nick Peri & Romy Berlin at Allies and Morrison, Angela Towler & Cat McNaught at Rambert + Phillip Reed my assistant. It was shot early one winter morning in the freezing cold at Potsdammer Platz, from a spot where the Berlin Wall used to be. This image is part of a piece of work I recently exhibited called Berlin Voids. I chose it because whilst it is personal work rather than for an architect or a magazine, I employed the same technique as if I was working for a client: careful choice of lens, place and time of day etc.

For me it illustrates how architectural photography now has a much wider language than ever before: we can shoot in the style of Tony Ray Jones, make films or shoot topographical landscapes all with the same camera. The enclosed picture (taken in 2014) is among my favorite shots, not only because I actually grew up there, but also because - to me - it depicts the essence of brutalistic architecture in the 60s. The complex shown is called 'Terrassenhaussiedlung'. It was built by Eugen Gross and the 'Werkgruppe Graz' in 1965 and is standing in Graz, Austria. The architecture (and the photo) demonstrates how concrete can be used, not only as highly emphasized building fabric-, but to create whole (kind of surreal) landscapes. The sheer monstrosity of it-, the generalization of its own 'nature', forces you to either love or hate it. I choose first.