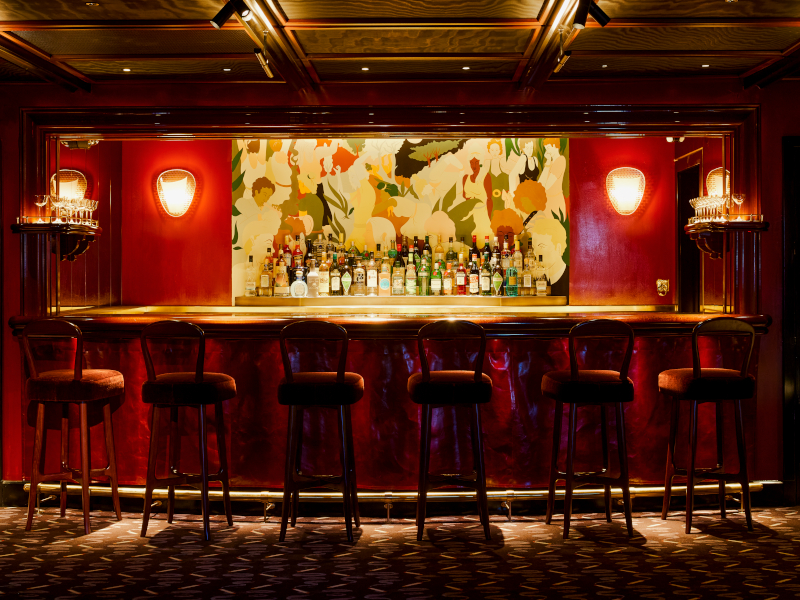 With KOKO’s redesign, the team reached back through time, taking inspiration from the 19th century theatre’s deep history, reviving and revitalising it for London’s 21st century clientele

SPRINGTIME IN LONDON saw the rebirth of a London icon: the 19th century theatre KOKO in Camden, which has seen a dramatic transformation. While far from its Victorian theatre origins – the historic music venue has undergone several transformations during its lifetime – its latest design scheme pays homage to these eras. From a cinema to a BBC radio and recording studio, music venue ‘The Music Machine’ in the late 1970s and ‘Camden Palace’ from the 1980s up until 2004 when it was bought by its current owner, the venue captured pivotal moments within entertainment and popular culture.

With seven years of planning and three years of building, KOKO has seen its latest, and most dramatic transformation thanks to a £70m restoration and redevelopment led by KOKO founder and creative director Olly Bengough together with lead architects Archer Humphryes Architects and interior designers Pirajean Lees. 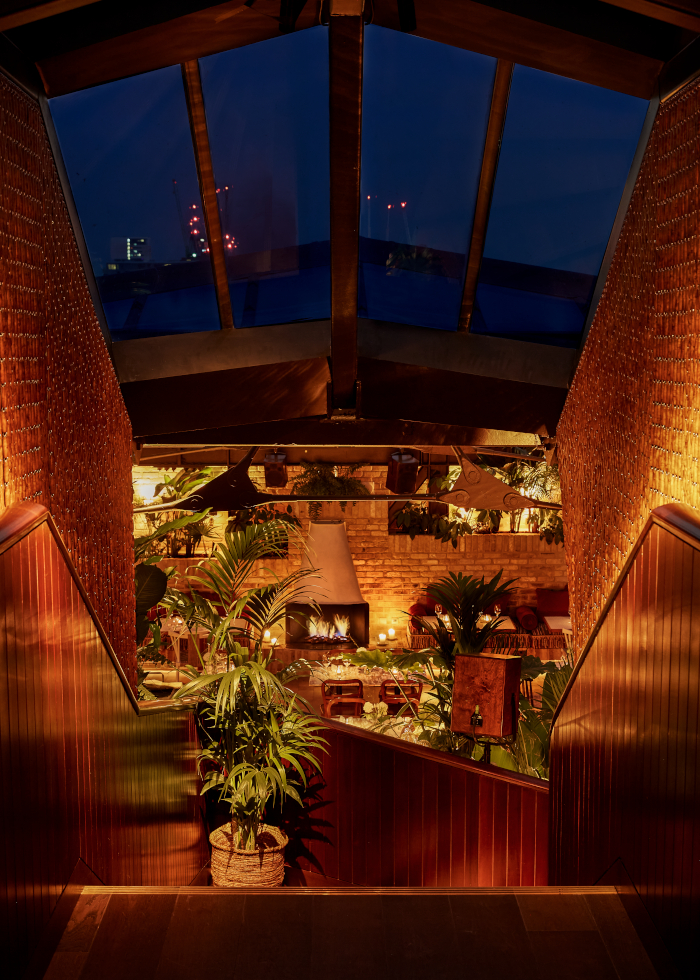 The new architectural project has amalgamated three buildings; the Hope & Anchor pub; a former piano factory and the Victorian theatre; with a 20,000 sq ft new roof extension, evolving into a dynamic, future-facing broadcasting experience alongside the full restoration of the theatre. The architectural concept for the project was to create a social environment that seizes KOKO’s vigour. With the threat of extinction as a music venue, Archer Humphryes set about aff irming KOKO’s value within the urban fabric throughout the planning processes. The resulting design scheme sees the historic theatre with ‘decks’ of hospitality.

Internally, the magnificent Victorian theatre is beautifully restored in KOKO’s signature red and gold with Archer Humphryes Architects working closely with English Heritage, The Victorian Society and the Camden Borough Council’s conservation department. ‘When Olly bought The Camden Palace in 2004, it was a dance music place painted black. He painted it red and gold and put live music back into it’, says David Archer of Archer Humpryes Architects. ‘That field of red and gold is incredibly theatrical in terms of enjoying live music and performance [at KOKO]. Certain historic bodies were keen that we should go back to the original cream and gold of 1900, but this was about recreating KOKO [... and] what Olly’s created and managed for 15 years […] is just as important as what was put there originally.’ 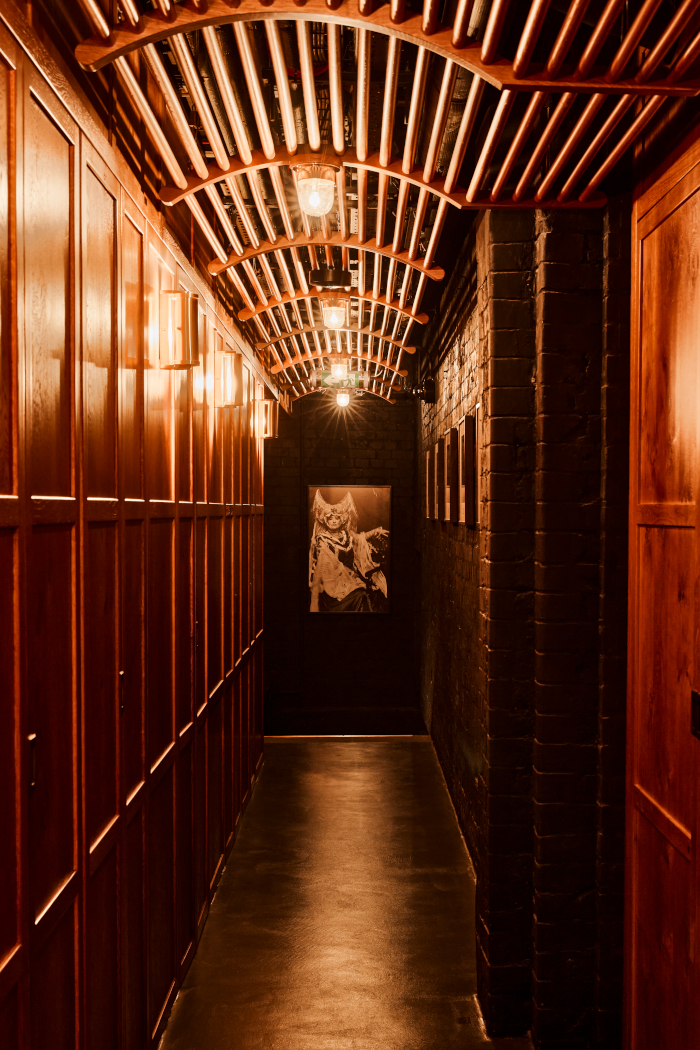 One of the corridors of the Vinyl Rooms, adorned with artwork and flanked by wooden panels on one side and brickwork on the other

Archer Humphryes Architects also discovered the theatre’s original fly tower, which has been restored and transformed into an intimate, immersive performance space. Its exposure restores the original acoustics of the auditorium and is the only fly tower used operationally in a hospitality environment in the UK. 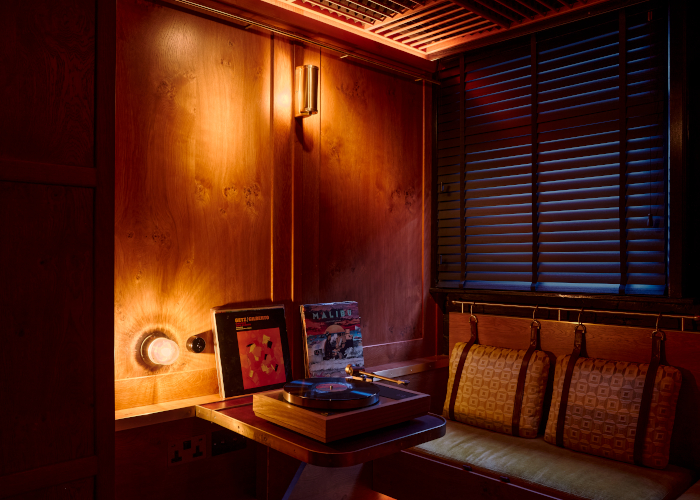 True to its name, the Vinyl Rooms feature tasteful vinyls and classic record players, adding to the ambience of the rooms

What’s unusual, but utterly brilliant, about this project is the creative relationship between client, architect, and designer. Bengough worked at ground level to help deliver the project with both Archer Humphryes and Pirajean Lees, which he collaborated with to deliver the interior scheme. And together they have designed some 1,800 sq m of new interior spaces, including four new floors for a members club called The House of KOKO, the ground floor Café KOKO and KOKO’s new shop and DJ space. For Bengough, he says the latest transformation was as much about personality as design flair:

‘When thinking about the design of the new KOKO, it was so important for me to work with a studio as collaborative as Pirajean Lees. Together we have been on this extraordinary creative journey; I wanted to create a one-off experience that celebrated everything that KOKO represents – its history, beauty, artistic legacy – and Pirajean Lees really understood this vision’. 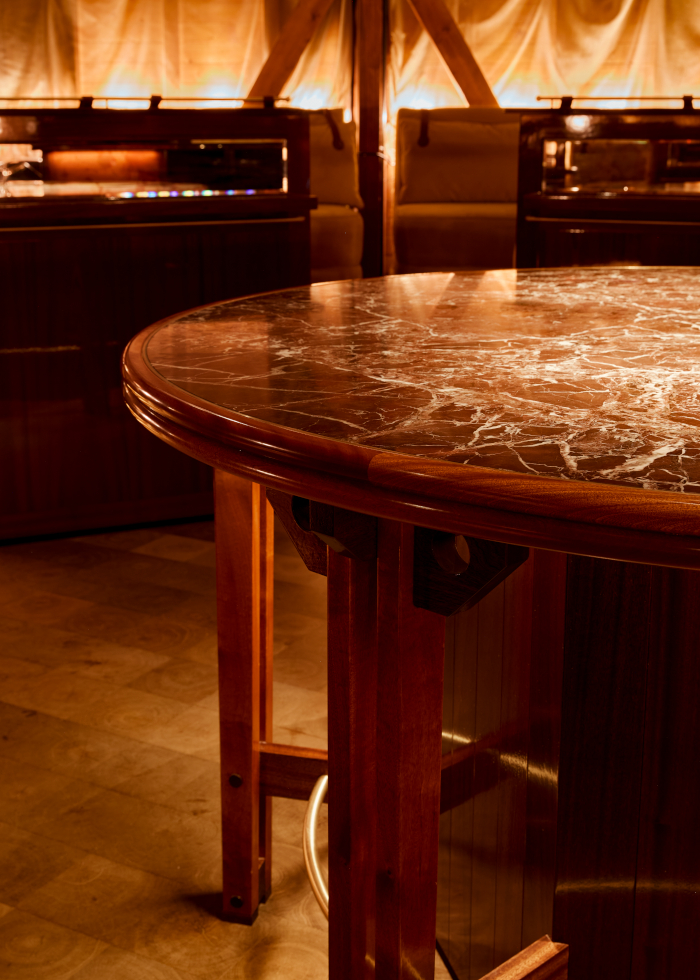 The interior design concept for The House of KOKO pays homage to the history of the timeless theatre, from its colourful Victorian origins to the Bohemian lifestyles of its many past performers such as Charlie Chaplin, The Rolling Stones, The Sex Pistols, Grace Jones, Kanye West, among many others. It’s the brilliant result of a collaborative, creative – yet challenging – journey, for a team that clearly works well together. This is echoed throughout Pirajean Lee’s answers.

‘Olly’s brief was very simple but equally ambitious; his vision was to create something that “redefined music and entertainment”’, says James Lees of Pirajean Lees. ‘The venue’s enormous legacy, with 200 years of history combined with Olly’s vision to combine three historical buildings into one, gave us the opportunity to design something completely unique and that had never been seen before anywhere. KOKO is a unique off ering in the global music industry. It is creatively daring.’ 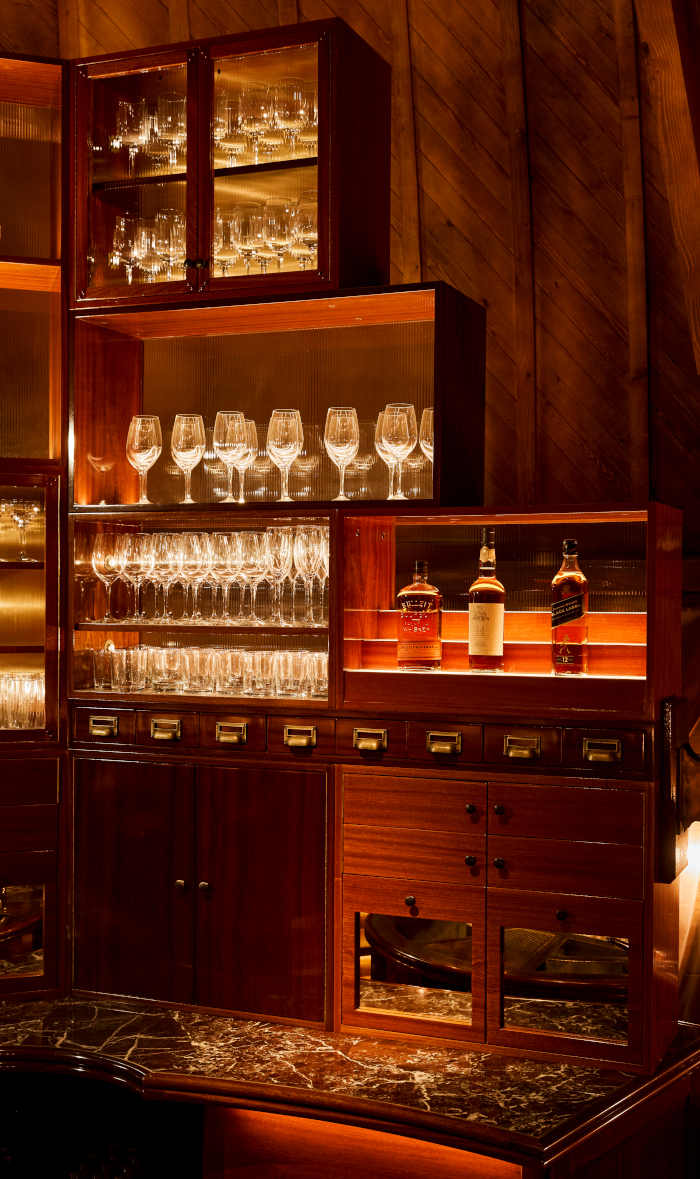 This can be more clearly seen in the bespoke bar designed by Pirejean Lees.

Pirajean Lees took inspiration from how the theatre would have lived and breathed. Anchored in this strong narrative, each room has its own identity, reflecting all elements required to operate a theatre. From the first floor stage kitchen which takes inspiration from the ironmongery; to the bathrooms, inspired by backstage hair and make-up rooms where performers would get ready. Influenced by the old screen-printing rooms, Ellen’s Jazz and Blues Club features a hand-painted mural by Christopher Lux, while intimate vinyl listening booths reference what could have been KOKO’s old lighting storage rooms.

Throughout the interiors, Pirajean Lees has introduced bespoke features, design elements and furniture that acknowledge the language of the music industry and KOKO’s colourful past. Textures, patterns and materials used throughout The House of Koko are inspired by the Bohemian styles of legendry KOKO performers. In the Vinyl Rooms, a bespoke ceiling references the structure of the original fly tower, and the Battens Bar features a vintage speaker fabric used as a ceiling finish. A bespoke leather sofa in the piano room harks back to the punk era, while the one-of-a-kind cigarette carpet in Ellen’s creates an intimate salon ambience of a traditional 1940’s jazz bar. Inspired by the original backstage doors at KOKO in the 1920s, bespoke deep olive doors with black frames are replicated throughout the building. In the penthouse, fabric-lined rosewood sliding doors are inspired by vintage Sony speakers. 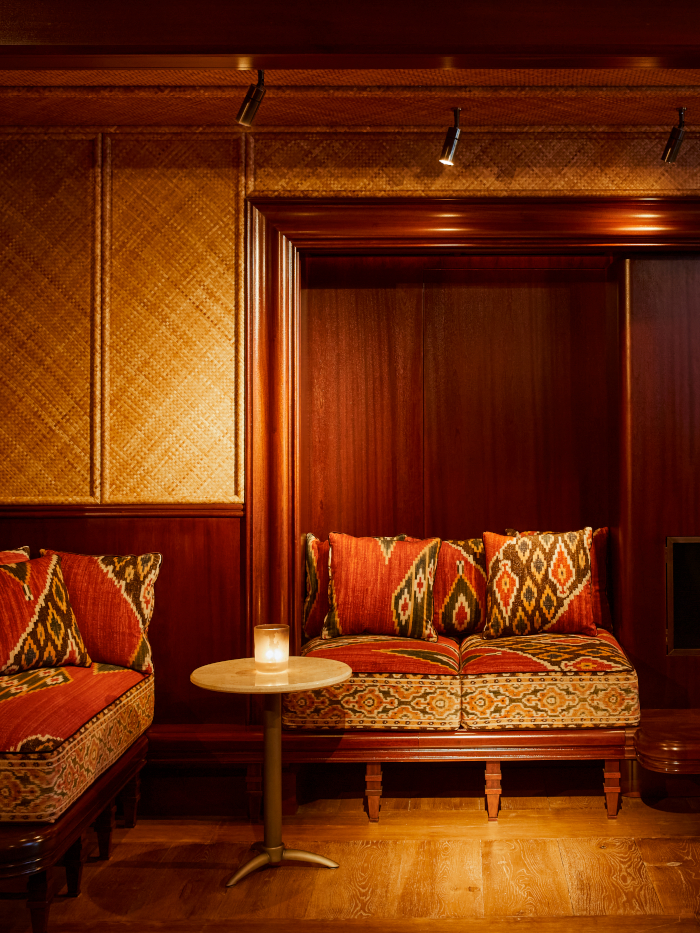 The House of KOKO also features a library, decorated in Bohemian style

‘The colour palette throughout is something that ties everything together,’ says Pirajean. ‘It’s very warm, with lots of ambers, reds, coppers and glossy mahogany. Nothing is too powerful or clashing, which has been influenced by the original theatre. There’s a custom deep red carpet that runs the length of the corridors and stairwell that’s the directional so when you hit the red carpet you know you’re in the circulation so that will help you navigate your way around the building’. 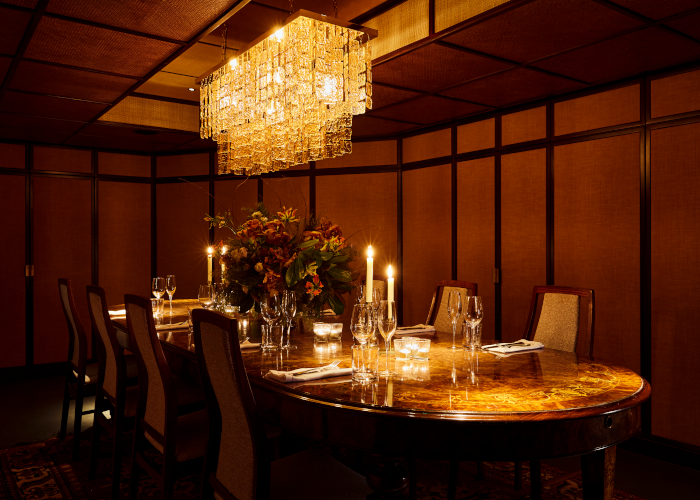 The House of KOKO’s private dining room, elaborately decorated and bathed in light cast from a crystalline chandelier

High spec live streaming capabilities have also been integrated throughout the venue, a factor carefully taken into consideration in the interior design. Each space is showcased as if it were a set, where details have been carefully considered as to how it looks on-screen. The designers carefully selected textiles and materials that are both tactile and visually beautiful, allowing guests to interact with the textures and colours whilst in person or in the digital world. 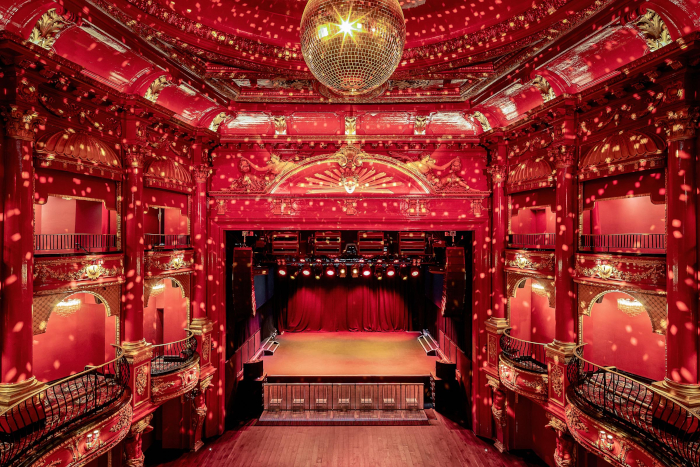 ‘We’re used to working with clients as passionate as Olly, so we knew how to navigate people with that ambition and drive and that is something that we absolutely love,’ says Pirajean. ‘The collaboration, the meeting of creative minds, learning from interesting people, that human exchange and ultimately being able to create what we have at The House of KOKO has been incredible, absolutely every detail designed to be the best it can be.’ 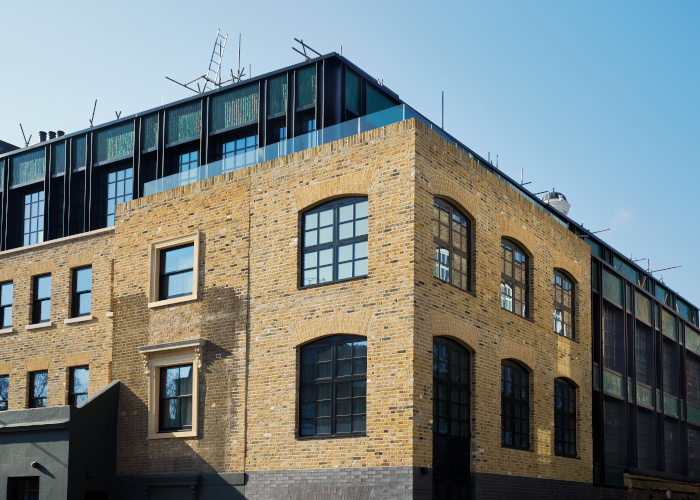 The exterior of the House of KOKO, depicting the rear of the building that is situated in the trendy London borough of Camden

Lees adds: ‘A lot of that creative thinking was highly encouraged by Olly. That’s rare, to find clients who understand the value of that, to have that vision and how the aesthetics will affect the experience. We used to have four-day material meetings to get things right. Olly wanted to be a part of the whole process and cared about every detail. He really challenged us. The whole project was like a constant workshop’.