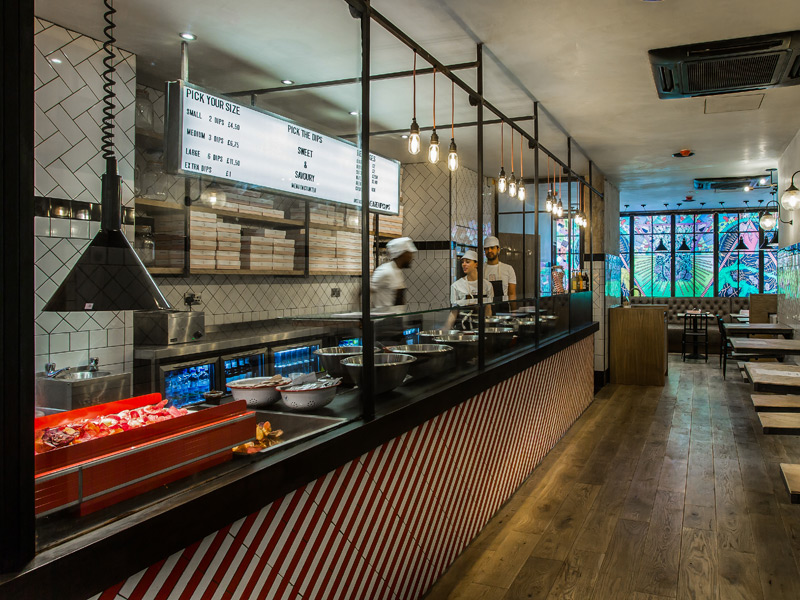 Crisps are undoubtedly a much-loved snack, enjoyed as much in pubs as they are in playgrounds, but where would you expect to find the ‘best-tasting crisps in the world’? That’s what restaurateur Hipchips was aiming for with its product, and so its first restaurant needed to live up to that aim too. The brand story had to emphasise the handmade, unprocessed aspect of Hipchips’ food

Hipchips employed branding agency Ragged Edge for the branding and visual identity, which included signage, graphics, logos and establishing the overall tone for the brand: ‘unmistakably British, but not afraid to tell it like it is’. Applied Studio was recruited for the design of the Soho restaurant, translating this into interiors – working from concept through delivery to the final handover to the client.

Hipchips’ brand story sought to establish associations such as ‘premium, British, bold, crafted, welcoming, inclusive’ with the product. With this in mind and to earn Hipchips its place in the ever-crowded and competitive restaurant market, the direction Applied Studio took was to tap into the associations of time-tested British retail classics, ‘to establish Hipchips as a contemporary take on a traditional British shop – a butcher’s, grocery store or barber shop. The idea being to establish the quality of the product by referencing the qualities of those traditional shops – instilling a new and exciting product with the history and quality of something more traditional,’ explains Applied Studio founder and director Patrick Abrams.

This helped shape the material choices: the red and white angled ‘pinstripes’ of the logo evoke the barbershop’s striped sign, and are proudly replicated on the counter front in tiles from H&E Smith. White, gloss brick tiles part cover the walls, and with their contrast dark border wouldn’t be out of place in a traditional pie and mash shop. The base of these recognisable traditional elements, as Abrams explains, ‘gave us the freedom to experiment and implement the contemporary elements’.

The large pinboard menu above the counter is a bespoke item created by Applied Studio; in a twist on the traditional format, it inverts the colouring, using a white background with black letters. This was a bespoke item created by the studio, a process that involved using translucent Perspex ‘with thousands of holes drilled into [it] to fit standard pin board letters’, Abrams explains, and then combined with letters sprayed black. Another custom touch is the bright red conveyor belts, displaying the freshly cooked crisps as they make their way towards a waiting customer. The commissioned artwork from Sharm Murugiah

It was also important to the brand story to emphasise the handmade, unprocessed aspect of the food. The simple journey from ‘farm to table’ is illustrated in a commissioned artwork from Sharm Murugiah. The illustration, illuminated and positioned on the rear wall, also forms a focal point, brightening up the seating area, and is noticeable down the length of the long, narrow space, from the counter or from the street. With a psychedelic style in a similar vein to the illustrations of craft brewers Beavertown, it forms another contrast with the more traditional elements such as the classic leather seating directly below it. Other more contemporary elements used include a thin, exposed metal lighting grid, and contemporary lighting fixtures from DCW Éditions, Lambert & Fils and Fritz Fryer.

While the back of the restaurant features classic leather banks of seating, in order to create more seating space along the narrow plot Applied Studio created bespoke folding chairs and tables on wall brackets – flipped up and down according to how busy it is – providing just the ease and flexibility fitting for a crisp restaurant.