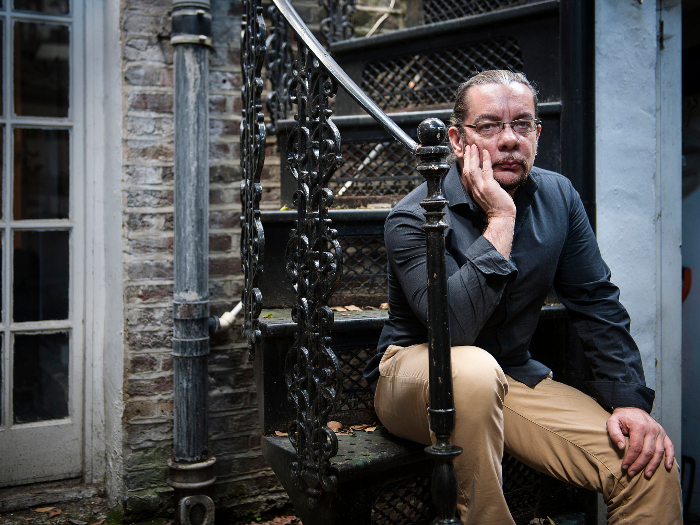 From putting his visual stamp on youth culture through the 80s and 90s to designing survival strategies for the creative sector, Neville Brody is a man with an appetite for challenge. Veronica Simpson discusses typography and tactics with one of few remaining gurus of graphic design.

Has the role of the graphic designer been diminished or augmented over the last 40 years, now that our minds and screens - and lives - are buckling under the weight of visual clutter and unsolicited information? Few would be better placed to argue the toss than Neville Brody. In the 80s and 90s, he really was a household name - if your household liked reading the era-defining magazines he designed such as The Face, or Arena, or listening to Depeche Mode or Cabaret Voltaire whose iconic album covers he created. Over the decades, he's been celebrated with a retrospective exhibition at the V&A, published the world's best selling book on graphic design, developed whole new families of fonts, steered global advertising and identity campaigns for Dom Perignon, Issey Miyake and Nike, and given The Times and The Guardian the friendly, modern fonts and layouts they still wear proudly today. Which graphic designer can claim as much influence in 2013?

But that is really not where Professor Brody's head is right now. Though he continues to run his own Research Design Studio from offices in London, Berlin, Barcelona and Paris, he's got much bigger fish to fry than lamenting the lost glories of record sleeve art. Instead, he's waging war against the coalition government's education initiatives, mustering all the ammunition he can as both Dean of the Royal College of Art's School of Communication, and the current president of D&AD, to counteract the damage being inflicted on Britain's creative future.

'It's neanderthal', spits Brody. 'This current government are studying Victorian models and they believe in the mechanisation of society, which means that everyone has a place and a cog... and this is the way they keep the status quo. It's about funneling funds from the poorer to the richest. They don't want to educate a freewheeling proletariat. You have to keep the factory running.'

Strong words, but few in the creative sector would disagree. The net result of current educational reform is that very few people will be studying art or design at secondary school because Tory education secretary Michael Gove has made every school terrified of not achieving the obligatory GCSE grades in his five approved English-Baccalaureat subjects (English, maths, one science, one language and one humanities subject). Furthermore, nobody will be able to afford to go to art school - after all, which parent in austerity Britain has the resources to pay the £9,000 a year fees so that their child can study painting or printing while learning critical and original thinking; and certainly few but the very luckiest would-be artists could ever contemplate earning the wages that would enable them to pay back an £80,000-plus undergraduate student loan in today's financially strapped creative sector.

The sheer short-sightedness of these policies is mind-boggling, as Brody points out, when emerging superpowers like India and China are shifting their economic focus from manufacturing to creation and innovation. He says: 'The Chinese government has stated that their new motto is switching from "made in China" to "created in China". (They) want to switch from being the makers to being the innovators and inventors and the marketers. So they have got the whole package. We are no longer a manufacturing and industrial nation. Our skill set has been innovating and marketing but if we are not supporting that and don't have the skills, then what happens?'

You might think the economic argument would convince the education department otherwise, but Brody says the coalition's policies go deeper than that. 'Even before he came to power, David Cameron said the two groups in society that the Tories have to tackle are the unions and the teachers. They were developing plans well in advance. The attack on education is to diminish teacher power. It's about trying to destroy the intellectual class. So you turn school into a mechanistic and vocational space. You get rid of anything intellectual or liberal. It's all learning by rote.'

But despite the anti-government rhetoric, Brody, on the balmy summer's afternoon when we meet, is far from gloomy. He's too busy developing antidotes. The first is through his role at D&AD. Currently celebrating its 50th anniversary, the Design & Art Direction organization was founded (by David Bailey, graphics legend Alan Fletcher and actor Terence Stamp, among others) to promote excellence in film, photography and print. But recently it had seemingly lost much of its relevance to any design field other than the advertising industry, emerging once a year for its big, self-congratulatory love-in: the D&AD awards.

Brody, who joined the organization two years ago, said he would only stand for president if they put the proceeds of the awards into education. And he got his way. Now there is a D&AD Foundation (set up last year, under Rosie Arnold's presidency), which is fuelled by profits from the awards and endowments from members. With this behind it, D&AD is looking to eventually support 'hundreds' of art and design students with reasonably generous bursaries ('enough to make the difference between being able to go to college and not being able to afford it', says Brody).

Brody is also pushing his scheme for previous award-winners to become mentors to new, up and coming artists, designers and film-makers. There is also D&AD funded research under way to identify the parts of the UK most afflicted by industrial and manufacturing decline, and with the highest youth unemployment, with the intention of identifying what needs to be done to help - where, when and how to provide creative, manufacturing and innovation education and/or training resources.

Brody's face lights up as he recounts that, at June's D&AD awards dinner, 'A lot of people were saying that D&AD has integrity again.'

His other weapon is the RCA, where there has been a major refocusing of aims and intentions. Says Brody: 'My remit at the RCA is not to create artifacts. It's to create skilled, dangerous minds. Our objective is to create individuals who will lead and create industry and society. Design is about everything. It might be that someone will leave our school and start creating government strategy. We're changing the education system within my school to be more critical thinking and research based, but with a much bigger opportunity to look at de-programming, de-conditioning and coming out with a sense of ability and self-direction, to be lateral and look at new possibilities. So it's a shift away from the idea of being craft based to producing mavericks, like Paul Smith or Heatherwick or Barber Osgerby, Troika - all RCA cross-disciplinary designers. We are post disciplinary. Everything's hybrid.'

Brody has just launched a new course, called 'information experience design'. It sounds like a typical digital-era discipline, but Brody is not leaping on digital bandwagons. Digital is just one paint on a designer's palette. He says: 'We don't think of the industrial revolution as the steam revolution. Steam enabled the industrial revolution. Digital is just steam for the 21st century. It allows you to drive engines and forge new models for design and distribution. Steam enabled transport. Digital does the same but in a knowledge space. It's a creative and a knowledge revolution - almost like a renaissance. The Royal College is working very heavily in developing the digital public space.'

As a head of department, he must be feeling the pressure to keep courses attractive and student numbers up. Have RCA applications been impacted by hikes in fees? Brody says they're down, but is convinced that the would-be students who are not applying are the ones who wouldn't have got in anyway. The quality of students is as high as ever, he says - 'if it wasn't, I wouldn't hang around.' As an art college, he says: 'The challenge we have is not just to evolve and change but to grow. We have to increase numbers. We are launching new programmes. We are shifting heavily towards practice-based research and forging new ideas about what a PHD is and how labs can work.'

There is no point, he says, in comparing prospects for an art student these days to those that faced him when he burst onto the post-punk scene from London College of Printing (now London College of Communications). 'Now the dynamic has changed. The way social networks operate is radically different to how street culture evolved. Those old sub-cultural things like punk just can't happen any more. Punk was able to evolve and develop first in an underground vaccum.' By the time it emerged into the mainstream, punk had been refined and honed, and 'it was the people at the top of their game that were getting exposure and publicity. Now everything would have been documented and photographed and on Facebook. The situation has flipped so that the more you communicate the more you are part of the mass. The less you communicate, the more it probably means you are part of the elite.'

Digital Vs Anti Digital, the D&AD Annual from 2008

Brody doesn't bemoan the loss of attention or focus on the creation of a single, defining image. He says: 'There's a hiatus and a transition going on. I think there will be a post screen space of some kind. We'll be swiping stuff from the ipod onto the wall. It might lose its physicality. But by the same token we are opening access to far more people to publish.' Print will not disappear altogether, he says, but it will become a luxury craft.

Brody is clearly not a man for nostalgia. He says: 'At the awards I was sitting next to Ekow Eshun (former Arena editor) and he asked me: "Don't you miss designing?" I said: I don't know what you mean. This is the biggest design project I've ever been involved in - working with the RCA, exploring digital public space, my role at D&AD. I'm so blessed that I'm able to absorb it. I've had to ascend the deepest of learning curves. But to be able to bring a kind of vision to that and the thrill of starting to strategise that - craft it, design it, get people on board; it's been an amazing, rewarding, exciting journey, despite the government's attempts to chop arts education off at the knees.'

Or perhaps because of it: there's nothing that sharpens a fighter's appetite better than a big, tough adversary - or one making so many stupid decisions. You get the sense that this is a battle Brody believes he can win - not playing by the cumbersome old establishment rules, but inventing a whole sleek, streamlined and contemporary set of new ones. Go, team Brody.