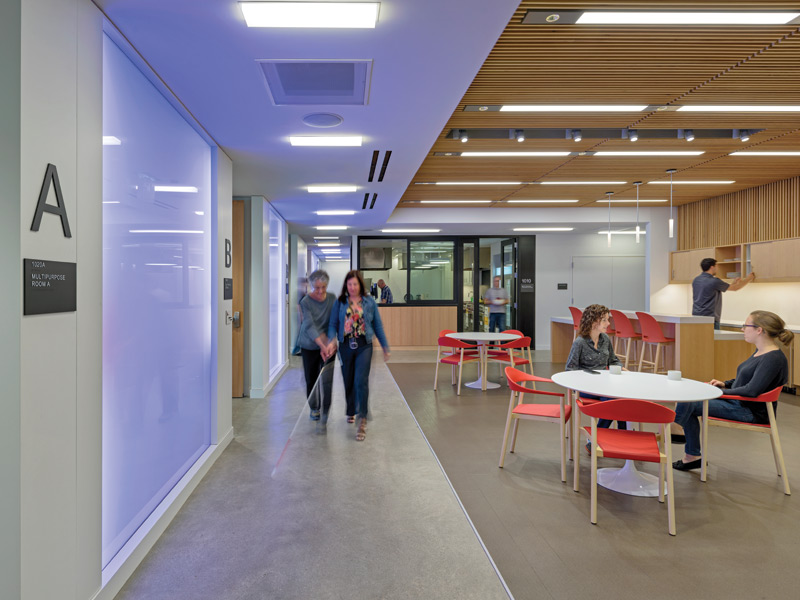 For those with specific sensory experiences — from deafness and blindness to autism — the design of spaces can help or hinder. Increasingly, architects and clients are working together to create environments that are more inclusive than ever before

In this age of visual over-stimulation it is hardly surprising that an architecture of wacky silhouettes, complex facade formations and parametric acrobatics dominates our skylines. Yet focusing on the visual alone is clearly not conducive to any sort of architectural discourse. This is particularly important for individuals with sensory difficulties or impairments. For people who are blind, deaf, deafblind or autistic, the sensory effects of architecture can have a dramatic impact on one’s ability to independently and safely conduct everyday activities.

Codes and regulations relating to accessibility are constantly being improved to ensure new buildings are as accessible to as broad a number of people as possible. British Standard BS 8300, which provides guidance for architects on accessibility, such as ramp widths and gradients or space requirements for wheelchairs, was updated in February 2018.

The latest version of the standard promotes a design approach of broad inclusivity, for people of all physical and neurological experiences, which moves beyond simply building separate add-ons for people with disabilities. Just as the pioneers in extravagant forms go above and beyond the requirements for an office block or train station, so too are architects pushing the envelope to create radically inclusive environments that respond to a diverse range of sensory needs. TouchBase Pears in Selly Oak, a suburb of Birmingham, is one such example. Designed by Glenn Howells Architects (GHA) for Sense, a UK-based disability charity supporting people with complex communication needs, including those who are deafblind, this 4,042 sq m purpose-built and multipurpose centre was completed in September 2017. TouchBase Pears encompasses spaces for day services such as art and music therapy, a theatre, a sensory room (a therapeutic facility with a water bed, ball pool and AV systems designed to provide sensory stimulation for individuals with limited communication abilities), as well as offices for Sense and other charities based in the area. Public-facing facilities include a cafe and a small library, which occupy a wide thoroughfare that runs street-like through the centre of the building, encouraging integration between the local community and the building’s users.

Certain design features at TouchBase Pears, such as extra-wide circulation spaces and serveries fixed at wheelchair height, are built in to provide a basic level of accessibility. Yet the range of functions, as well as the diverse needs of Sense’s primary service users, means that one of the primary aims for the project was to create spaces which are as flexible and adaptable as possible.

‘When we studied the user group, we realised there are very specific needs for individuals, but it was never about catering for individuals because one person’s needs might be very different to someone else’s,’ explains Sandeep Shambi, Studio Director at GHA.

Sense and GHA worked with a group of ‘champions’ — service users, families and carers — at various stages to consult on design concepts, materials and colours. During this process Shambi found that the champions showed a particular aversion to traditional medical environments. ‘I remember the first meeting, I put up slides of those kinds of spaces and people’s faces just dropped, like, “I hope we’re not getting that,”’ he says. ‘Some of the most positive reactions were to Louis Kahn buildings and art galleries, where there was a use of concrete, timber, warmer materials.’ The result is a 15m x 15m exposed concrete frame with subtle adaptations to control light in each section of the building. Smaller rooms contain blackout blinds and fixtures with faders, while the public-facing foyer and cafe includes narrow, north-facing skylights cut out of the concrete frame which allow an ambient natural light to enter without casting bright pools of light and contrasting shadows which can impact visibility. Similarly, surfaces such as tables and bathroom panels are finished with a super-matte surface that gives off very little reflected light which can be confusing or distressing for visually impaired people.

Only 4% of registered blind people in the UK have no vision at all, which means most blind people still use visual clues to navigate their environments. For this reason, contrast is the most important tool for blind people to gain a visual understanding of a space. Where a typical medical facility might employ a crude bright blue and yellow colour scheme to clearly demarcate the border between a floor and a wall, or a wall and a door, designers of domestic spaces for the blind are using subtler tones to achieve this contrast.

As Manoher Matharu, director at Gardner Stewart Architects (GSA), whose residential project for the Royal National Institute of the Blind (RNIB) is due to be completed in late 2018, explains: ‘When it comes to designing for adults, young adults in this case, you have to make sure it reflects somewhere they want to live in. It’s not a nursery or a school — you want it to feel like home so you have to be using colours that reflect that kind of environment. All you need is a light grey and a dark grey and you’ll achieve the exact same tonal contrast as you would if you were using brighter colours.’ The residential project GSA is masterplanning is a new community of 102 residential units in Redhill, Surrey, mixing RNIB-supported living facilities with open market homes. RNIB Redhill will also feature a sensory trail, landscaped by Studio Loci, which will allow visually impaired residents to navigate through the area using aromatic guidance clues, such as lavender plants. Crucial here is the notion that people with specific sensory needs — blind, deaf, autistic or otherwise — want and deserve high-quality design beyond basic functional need. This is particularly evident at the LightHouse for the Blind and Visually Impaired, a 3,511 sq m multipurpose facility in downtown San Francisco, completed in 2016 by Mark Cavagnero Associates.

Here, surface materials are used for wayfinding — polished concrete floors that elicit a crisp sonic response to the tip of a cane — but also for fine detailing. As project architect Katy Hawkins explains: ‘Where we have a special ceiling surface, such as colourful felt panels or wood slats, we wrapped the material down the walls so that it can be felt if not seen by all users.

‘This was done with the intent of not biasing the design toward sighted users of the space.’ LightHouse was designed in collaboration with Chris Downey, an architect who lost his sight in 2008 and has since become a specialist in architecture for the blind. Downey helped to produce tactile prints with raised lines to communicate design ideas to visually impaired individuals in a way that two-dimensional graphics are unable to do. Special ceiling surfaces at LightHouse, designed by Mark Cavagnero Associates, are wrapped down the walls so that they can be felt if not seen by all users. Image Credit: Jasper Sanidad

Working with service users has become crucial to the design of new buildings at Gallaudet University, Washington DC, which specialises in education for the deaf. The university’s most recent hall of residence was built in 2012 through an integrated design/build process whereby students and faculty influenced the completed building. ‘People who decide where to cut costs often cut things that are essential to deaf people,’ says Ben Bahan, Professor of ASL and Deaf Studies at the University.

Bahan also works as part of the university’s DeafSpace project, started by architect Hansel Bauman in 2005 as an initiative developing a spatial approach and set of guidelines addressing how architectural design can impact the major touch points between deaf experiences and the built environment, such as space and proximity, light and colour, and acoustics. Staircases, for instance, should be wide enough to allow for a signed conversation. ‘The design process is a very important part of DeafSpace principles,’ says Bahan, reflecting on the vital role of user participation.

Like DeafSpace, the Autism ASPECTSS Design Index is a framework for thinking through architectural design with a specific focus on inclusive environments for people on the autistic spectrum, who often have extremely diverse sensory experiences. Developed over the past 15 years by Magda Mostafa, associate professor of architecture at the American University in Cairo, ASPECTSS aims to work with the variety of needs of those on the spectrum. ‘I look at it as a catalyst that helps develop design strategies or a framework of thinking. It’s kind of a mindset more than anything else,’ she says. ASPECTSS is an acronym describing seven criteria Mostafa believes should be taken into consideration when developing programme and design interventions, whether for retrofit or new-build projects. The criteria are Acoustics, SPatial sequencing (organising spaces around a logical series of events, such as a school day), Escape (safe spaces that allow for moments of sensory reprieve), Compartmentalisation (specific spaces for specific activities), Transitionary spaces (reducing the sensory impact of two contrasting spaces — such as a classroom and a noisy playground), Sensory zoning (for example, grouping rooms with low stimulus levels) and Safety (avoiding potential hazards for individuals with proprioceptive dysfunction).

Mostafa has consulted on projects around the world, including a live-work community in Rotterdam and a special needs centre in Cairo. While building guidelines relating specifically to autism do not yet exist in the UK, there is increasing attention and design innovation being applied to meet needs in correspondence with the ASPECTSS index. For example, the 3,000 sq m Beatrice Tate SEN School in East London, completed by Avanti Architects in 2013, is based on a ‘blank-canvas, neutral and clutter-free approach, which minimises distraction, allowing teachers to control the amount of visual stimulation for teaching and therapy,’ says Adrian Miles, associate director at Avanti. The school includes hydrotherapy and specialist sensory rooms, as well as a sensory garden. Similarly, the Cherry Garden School in Southwark, which is being expanded by Hawkins\Brown, is being designed with a calm and even lighting scheme, which ‘creates an environment that avoids exacerbating the sensory difficulties of pupils,’ says practice partner Carol Lees.

In each of these cases the buildings are designed to be as accessible as possible. Accessibility here is not simply a case of entering and exiting a space, but implies a more radical sense of empowerment. If we consider our environments as variously enabling and disabling, as opposed to seeing individuals as inherently able or disabled, then sensory intelligence should be a priority for any architect who seeks to radically change the built environment in which they work.