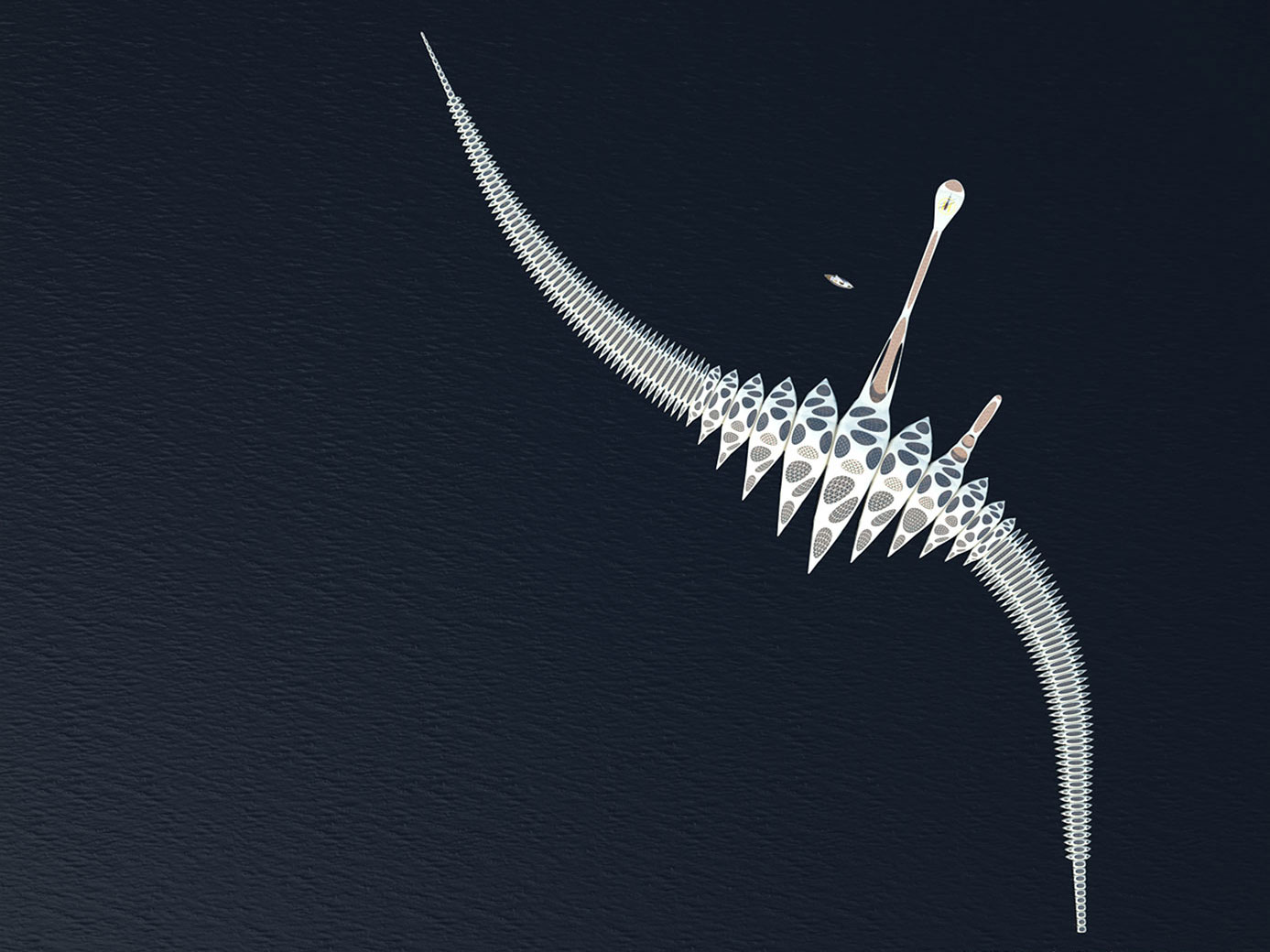 A floating luxury hotel mirrors the shape of vertebrae

A new avant-garde design for a luxury hotel has been revealed with the floating 'MORPHotel'.

Part-hotel, part-cruise ship, the Morphotels have been built around their linear curvature, much like a vertebral spine. This structure permits them to adapt their form to the weather conditions and the site morphology. Architect and engineer Gianluca Santosuosso designed the Morphotel, with the idea of creating a independent, self-sufficient aquatic organism.

The half-mile long spine curves with the water currents and in doing so eliminates damaging fuel expenditure from traditional cruise ships, which would normally travel at an average speed of 20 nodes using 470litres/km. With its unique shape, the Morphotel is not only able to take advantage of its surroundings - adapting to each territory at harbour points and cutting-back on energy use - but is capable of spiralling into itself to create a giant floating harbour for other boats and ships seeking shelter out in the open ocean. These actions allow it to become an independent aquatic organism. The structure is derived from a traditional naval construction. Multiple pods will make up a module framework in orthogonal and diagonal sectors. The modules would then be reinforced and waterproofed with metals (also conventionally used in naval architecture), while glass and open surfaces will interchange on the upper levels. A complex circuit of mechanical joints, much like railway carriage connectors, will hold the structure together and with the help of electronic controls be capable of expanding and contracting the vertebrae, thus altering its form. Morphotels would constantly be moving at a slow speed around the world, however would allow users to see and experience the places in between points A and B that would normally be left out. Through docking at various harbours across the globe, Morphotels aim to bring value to each city through opening its doors to the inhabitants; ideally they will return the favour. Santosuosso even went as far to create a new form of traveller: the 'tourizen', where the boundaries of citizens and tourists fall away. The Morphotel will offer a linear garden, restaurants, fitness centre, theatre and commercial area to the city.

Morphotels are functionally self-sufficient in a variety of ways. Energy is channelled to the entire complex through two different eco-friendly technologies. Firstly, solar panels travel along the upper areas of the hull and glass panels, and secondly the two ends of the spine will be able to produce energy via the movement of waves. According to the designer, other structures have effectively used this method to produce justifiable quantities of energy.
Furthermore, half the self-produced energy will be used to filter and store collected rainwater, the other to desalinate sea water.